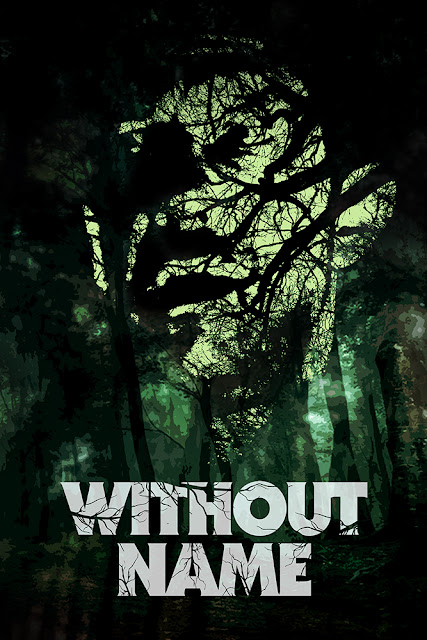 Without Name is an Irish horror film directed by Lorcan Finnegan and with a story written by Garret Shanley. It is the first horror in a heck of a long time that actually got me thinking about what I had just seen; what it all meant, and the unique cleverness of how the entire piece is framed. It works wonders in evoking a feeling of unsettled, subtle dread without actually doing too much to logically make you feel that way. There are no jump scares, visually nothing on screen should seem off, yet the way shots are framed makes the woodland scenery seem somehow alive with an energy all of its own.

Alan McKenna stars as forty something Eric; a land surveyor who is tasked with travelling to an ancient forest deep in Ireland for a developer. He is soon joined by his younger work colleague Olivia (Niamh Algar) who he also happens to be having an affair with. The longer Eric spends around the forest the more his mind starts to unravel with him becoming obsessed with the writings of the previous owner of the cottage he is staying at. This previous owner went insane after becoming convinced the trees were trying to communicate with him and it seems Eric is going to follow this path to madness. Is everything he is experiencing actually real, or is he suffering a genuine mental breakdown?

I get sick of tossing around the phrase 'slow burn' yet this is kind of what occurs with this movie. It is full of long moments of silence with the camera often lingering on objects and slowly zooming away, such as moss on a branch, or a group of trees. This is all used to great effect to build up a feeling of strange sentience. With horrors like The Blair Witch Project it seemed like there was something in the woods, here it seems like the woods themselves are alive, yet all without showing us this. I enjoyed how it is never made clear just what is going on, more it is left up to the viewer to draw their own conclusions. You do see things that can only be described as surreal, yet the film following Eric as it does makes you question if we are seeing reality, or just his version of it. This is all built on with a fantastic score that perfectly captures the slow build up of dread, and very good sound design, in particular the woods itself that had awesome sounds to it that made it feel like an organic entity.

There is a minimal cast here with much of the films 95 minute run time featuring just Eric and so the dialogue is brief. The arrival of his love interest, as well, as making an acquaintance in the mushroom taking Gus (James Browne) adds some flavour, with Gus in particular able to shed some light on the history of the forest, incorporating Irish folklore into the proceedings. With the beautiful, almost fairy-tale like woodland it becomes all too easy to start to suspect there is some truth to his half joking musings.  The three main actors were all great, I disliked the actual character of Eric (I think it was that I saw some of myself in him) but his path from grumpy man to raving loony was a pretty smooth one. Perpetually negative, and often the creator of his own perceived issues this is countered by Olivia who is full of life and energy.

It is often said by people who have taken psychedelics such as LSD and magic mushrooms that they feel a oneness with nature, at the mid point here there is a drug induced trip between the three main characters which seemed to be the trigger point for Eric's descent. It was an interesting notion hinted at that this sudden oneness with nature collided with the knowledge that as a surveyor he is indirectly responsible for the destruction of natural beauty caused something subconsciously to break within him. That and the constant guilt he has for having an affair, and desire to keep things the same while Olivia wants him to leave his loveless marriage. This is all portrayed in Without Name by increasingly art house style editing that led to some great, if confusing fast paced edits. One in particular was an intense strobe lighting style mash-up of trees rotating that really impressed. The editing in general is pretty cool, I liked how the outside world would suddenly get a lot darker, and there was a clever sequence later on when scenes of Eric in his cottage are meshed with the vastness of the outside (such as him peeking over his green sofa in his front room edited in to then show him from a distance peeking over a tree covered in thick green moss in the forest). If I had any complaints it would be that occasionally the lack of dialogue, and the increasingly bizarre goings on made me feel a bit confused as to where the film was headed.

While at time Without Name felt a little bit too meandering and unfocused, and a little bit too much of just Eric without other characters interactions I found this to be quite a memorable film. The plot teases at so much more than what is shown with throwaway lines coming back to suggest supernatural happenings, while the editing and direction is never short of interesting whether it is throwing past paced images into each other, or really soaking in the atmosphere of a particular scene. Without Name came out on most North American VOD platforms June 20th thanks to Global Digital Releasing, check out the trailer below.

Posted by Daniel Simmonds at 12:38