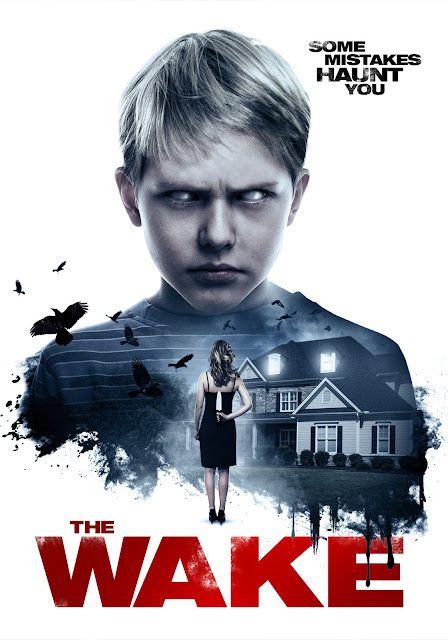 The Wake is a slasher film that is directed by Faouzi Brahimi and Bryan Brewer. Both these men also play roles in the film, while Brewer also wrote the story for this. There are some good ideas here and a novel start yet it all too often falls down to the many slasher film tropes that it self reverentially pokes fun at.

Tyler (Brewer) accidentally kills a young boy while drink driving (well as accidentally as you can get while swigging from a hip flask) and so is surprised to find him and his friends invited to the child's wake by his grieving mother Mrs Stevens (Darla Delgado) at her house several days later. So Tyler, his girlfriend Casey (Allie Rivera), her best friend Ashley, plus couple Ben (Aaron Milligan) and Ginger turn up to pay their respects. It isn't too long into the event when all five pass out having been drugged. They (the) wake up to find themselves tied up in various places around the posh house, along with Mrs Stevens. Before they can even think about escaping they are confronted by a burlap sack wearing maniac armed with a huge knife... 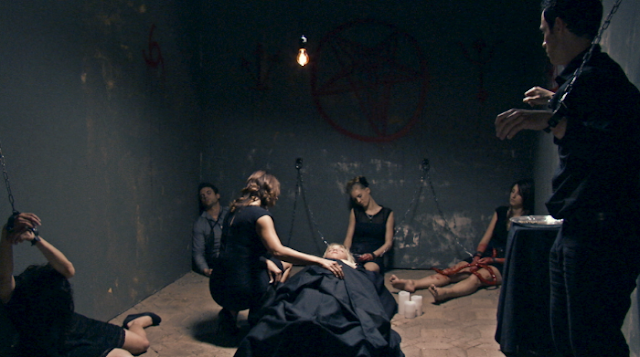 I loved the set-up for this slasher, the idea that the drunk driver reported his crime in the first place felt unique, let alone him then deciding to visit the wake of the killed boy. The first twenty minutes are pretty fun, Tyler and his friends really are the most self centred, obnoxious group you could ever hope to meet. Despite it being a solemn occasion Ben and Ginger start publicly making out, and to one up this show of non respect you then get Tyler deciding it is the perfect time to propose to his girlfriend! From this audacious start it became pretty impossible to feel any kind of concern for their well being. This also sadly applies to Mrs Stevens though, it's her only sons wake that also coincides with what would have been his birthday yet she is ridiculously upbeat and blase about the whole drink driving incident. This whole section including the initial discovery that the friends had been drugged was really quite interesting, I couldn't guess where The Wake would go to next.

I had high hopes this would be I Know What You Did Last Summer crossed with Saw, yet instead it is the former mixed with Scooby-Doo for the next forty minutes as the group slowly explore the house, occasionally crossing paths with the antagonist home invader who never really inspires any sort of fear (though his sack does look cool). This large middle section of the movie really lost the momentum the opening had built up and I found myself getting bored by the endless wandering. It seems self aware by referencing horror film tropes, such as when one of the group suggests splitting up and another one saying something along the lines off "when has that ever worked?!". However despite this The Wake all too often follows these tropes too closely itself, poking fun at people splitting up is one thing, yet later on when the group do decide to split up (on at least three separate occasions) there is no hint of awareness to be found. This applies to the antagonist also who kept aping the 'tilt head to one side' thing killers in slashers seem to love doing so much. There is a body count but it is muted in how the deaths play out with them all pretty much being identical, the first death doesn't happen until around halfway through and even then it happens off camera. The killer isn't too inventive in how he is portrayed which isn't helped by one part that was ripped straight out of Scream, regardless the killer was one of the best bits of the film, and it felt pretty fresh that he got unmasked two thirds of the way though rather than in the finale. 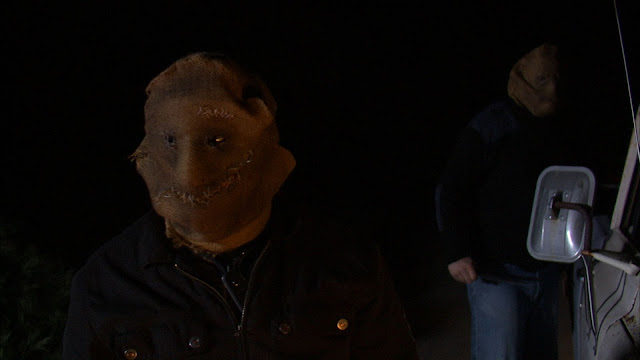 While there can be some humorous moments in the way characters act the writing of them falls into the usual trap of unnatural acting. Finding a friend dead leads to moments of sadness for the survivors (replete with the same mournful piano tune playing each time someone new is killed),yet this sadness only lasts to the end of the scene with the next then having people who have seemingly completely forgotten about what just happened.. At least in this way I can't say the acting is bad, no one stood out as particularly poor, all were entertaining enough. I found the general plot to be a bit weak though, it is painfully obvious from the very start what one of the later twists is going to be, while the antagonists plan turns out to be a bit full of holes when explained. It is a shame that such a good build up results in a feeling of directionless. That is until the final twenty minutes when The Wake starts improving again leading up to a pretty crazy twist (also seen in Downhill) that was satisfying in it's own way.

This is an entertaining slasher in parts with a decent beginning and end, but I found the whole middle section to just drag on too long with not much occurring at all to keep me absorbed. I did enjoy the occasional curve ball that was thrown to keep things fun, while on occasion some of the dialogue can be genuinely funny, so it was all swings and roundabouts. The Wake is available on all major VOD platforms on July 4th with the DVD exclusive to Amazon MOD thanks to Midnight Releasing, check out the trailer below and see what you think.