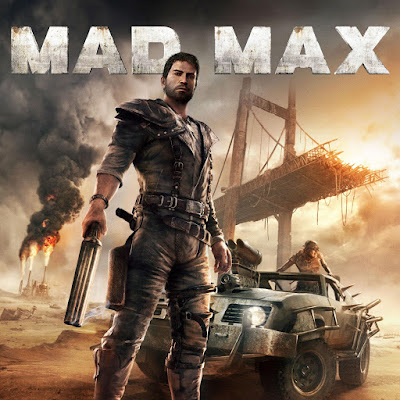 Mad Max was originally created to come out in conjunction with Mad Max: Fury Road. It is an open world adventure game that features a lot of driving but which also has you exploring locations on foot using a combat system ripped straight out of the Batman Arkham games. Scrap is the order of the day and can be found everywhere, it is used to not only upgrade Max's car, but also to upgrade his equipment. You also level up by earning 'reputation' but there is no need to worry about that as you get more than enough to (mad) max out your skill tree several times over.

Max is on his way to a mythical place he calls 'the plains of silence', here he hopes to finally leave behind the torment he lives with, and put an end to the voices in his head reminding him of everything he has lost. However while travelling he is ambushed by Scabrous Scrotus (the son of local warlord Immorton Joe) and his War Boys. They steal Max's car and leave him for dead in the desert.  Here he meets up with a car worshipping hunchback named Chumbucket who tells Max if he can find the parts he can make the ultimate car for him with which Max can continue his journey. 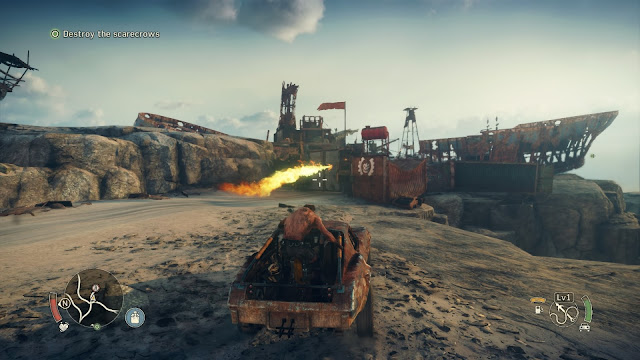 I have always loved the Australian post apocalyptic setting of Mad Max and so it was a lot of fun to explore it more deeply in this game. The world is made up of four huge areas, each of which is split up into many smaller locations. I wondered how varied a wasteland could actually be but I was pleased with the amount of variation you get to see here. From sulphur pits to rocky mountainous areas to deserts and oil fields, each area feels quite different. I loved that the starting area was what used to be the sea and so there are wrecks of giant ships everywhere, as you progress through the game you come across ruins of towns and cities. This environmental storytelling worked wonders in making the world seem like it was a dead place. Even better are the many items hidden that shed more light on what has occurred in the past. Reading letters and seeing photos that starkly talk about how the seas all dried up, disease ravaged the land, and about the complete breakdown of law and order that resulted was fascinating, again it made the world seem real. I loved how Max bitterly comments on any items he finds, this is a world without hope, and Max is very aware of this fact. There was also an interesting idea put forward that this whole world could actually be his own personal Hell, which is not something I had thought of before.

So the main crux of the game is the hundreds of side quests to do. Each area is populated with enemy encampments, sniper towers, scarecrows, scavenger locations, mine fields and race tracks. I found it so addictive to clear all these in each sector. Seeing the threat meter slowly decrease as you do all this gave an addictive buzz to things. In most open world games you have to wait until further in the game until you can do everything; until you have unlocked better skills. Here that is not the case, so much so that after the initial first quest I went off and did my own thing, only eventually going back to the story 10 hours later (where I then got given a load of tutorials that were kinda pointless). The side stuff takes up a good 75% of the game which is a good thing seeing as how the story missions are mostly so vapid and dull. The biggest side quest to do is taking over camps, there must be around 30 in the game, each is uniquely designed, so much so that late into doing them I was still finding surprising locations. One camp for instance is based on a huge bridge going over a chasm, another one starts you off investigating a cave which then opens up into a giant underground cavern full of zip wires and multi levelled buildings. Starting off I had intended to do all the races as well but I didn't actually find them that fun to do. In terms of clearing up each area the mine field missions were the absolute worst. To do these you had to use a different vehicle than your default, also you had to manually drive to the location rather than fast travel so it just all added up to make it frustratingly boring. 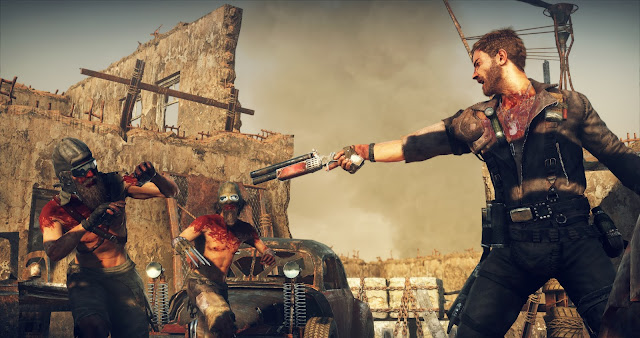 Around 60% of the game is driving around with you unlocking lots of upgrades for your car as you progress. You get a harpoon that can be used to rip car doors off of other vehicles, pull drivers from their seats, rip down fortified gates, and pull apart sniper towers and flame machines. You also get a rocket launcher of sorts, the ability to shoot jets of flame out the side of your vehicle, as well as a car specific sniper rifle. Elsewhere you get a variety of upgrades to make your vehicle both much stronger, as well as much faster. Driving around is mostly fun but I found on occasion it was hard to get the brakes working, while trying to turn at speed was an issue. The on-foot sections are pretty fun also. You use the close combat style of the Batman games to brutally fight the enemies that are made up of several different local gangs. You do reversals, combos, and finishers, all shown in brutal detail. Lots of neck breaking, stabbings, and you always have your trusty shotgun to hand too. There are quite a few bosses throughout Mad Max, however they are pretty much all fought the same way with only a handful of variations. All the side stuff is entertaining so it is a shame the main story missions are nowhere near as good, even if they do take you to some of the best locations. Exploring the ruins of past places is where I had the most fun, One memorable level sees you descend into a church that was buried under the desert sands, another sees you infiltrate an airport which is also now completely buried. I loved these reminders of the world that humanity has forever lost.

The game looks beautiful, especially the great outdoors that has beautiful sun effects, sound design was also pretty good with a fair amount of sound effects coming out of the PS4 controller. I found that sometimes the controls would collapse under pressure. Button prompts when fighting large groups of enemies I found sometimes didn't work, and the driving controls occasionally faltered as mentioned. I must have spent around 40 hours playing through this, but it really is what you make of it. Stick to the mostly poor story missions and you could easily finish this under 20 hours but I am sure you would have far less of an experience. When the end credits rolled after the satisfying finale (that sees Max get even madder) I felt I had gotten a lot of value for money for the tenner I paid for this.

End Note: Having watched Mad Max: Fury Road straight after finishing this I have to say how much better I felt the game was. Max here is a being of rage; someone at the very end of his tether who is only looking out for himself. I found the Max in Fury Road to be much more sane and also a lot less selfish which detracted from his character.
Posted by Daniel Simmonds at 10:12