So the award winning Karma. Incarnation 1 isn't a horror game but I did like the sound of it, and it is certainly a fantastical adventure that shares a lot of similarities with Botanicula, but also to my surprise some of the classic point and click adventures. Originally released in 2012 as an animation this then got made into a PC game that was released last year, and now has come to mobile platforms.

The entire story is played out via thought bubbles for the most part. There is no dialogue, more that you interact by your thoughts, and the thoughts of the person you are talking to appearing as little animations. This works surprisingly well, one quite epic moment showed how the removal of an energy source led to the downfall of a technological race, it was clever how this was played out with no explanation.  You play as a being who existed in the realm above a planet. A big evil creature abducts your one love and lands on this planet where he steals the protection of it. You get sent down to find a way to defeat him and restore balance. The issue of karma is prevalent throughout this game and it is such a big factor that it actually influences your actions and how the story plays out. It did seem like this is just the first part of a larger story as it finishes with the story seemingly only partly done. 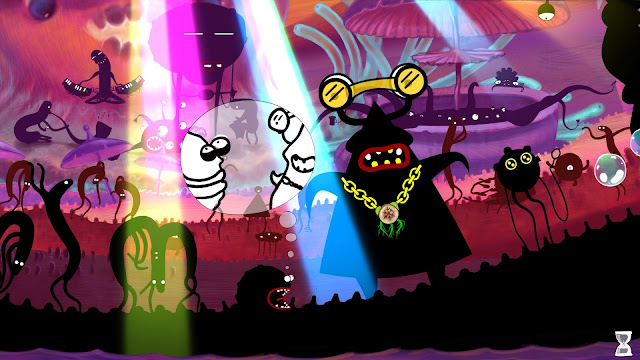 You play as a black slug like creature that is able to absorb other creatures to infuse itself with powers. Early on you consume a spiky plant like being, doing so makes a large spike grow on your back. The more creatures you kill or consume the more spikes grow until ultimately you get devil horns. This game is all about balance and not taking the easy way out. There are usually two solutions to any problem. For example there is a being who wants you to give him an important energy source in exchange for an item (that in classic point and click style another character wants). You can indeed give this item, but you can also straight up kill him and just take the item for yourself.  It should be noted however that if your karma is out of whack than come the finale you will be sent back to the very start of the game to try again. 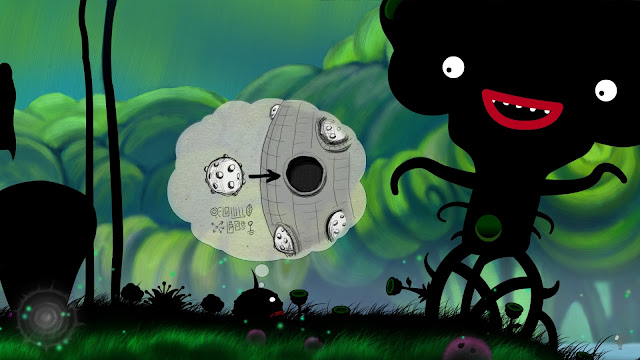 I at first thought this would be like Botanicula; that of a beautiful looking environment where you play with the surroundings to make cool animations happen but ultimately was more of a 2D walking simulator. Not so here though, initially it is like that but it changes as the roughly three hour game progresses. Ultimately I had some issues with how the game was paced out that really marred my enjoyment. The game looks beautiful, as in, really stunning, it feels like you are exploring a world straight out of Adventure Time with wonderfully designed characters, great music, and a deep sense of atmosphere. However walking around these environments came to be a real chore and I found myself desperately wishing there was a fast travel option due to the slow speed your creature walks at. The main part of the game has you able to travel between several different locations in an organic Tardis like device. A rubbish dump, a forest, a rave, the artic, and other almost Monty Python-esque animated places appear and they are really, really nice to look at, but realising I had to travel all the way back to my teleporter, then watch a loading screen, then walk to your objective sapped the energy out of me. This comes to a head in the forest area where a maze like puzzle involves you making your way around a giant leaf by jumping down holes that are bitten into it. Each time I went down a hole I was looking at a 10 second animation (including loading), and this was something I had to do repeatedly. As such it became very dull and frustrating having so little control over the length of time it was taking to do things.

On the one hand Karma. Incarnation 1 is stunning, at least visually, it is a psychedelic trippy treat for the eyes and everything from the animation to the sound effects and general vibe is very satisfying. On the other hand the long time it takes to get anywhere in the world came to be quite frustrating for me. Saying that I do believe the Android version that has now come out, as well as the iOS version due out in the near future would be a lot more fun than playing it sat at a monitor as it feels like something to play in small doses. Check out the trailer below.