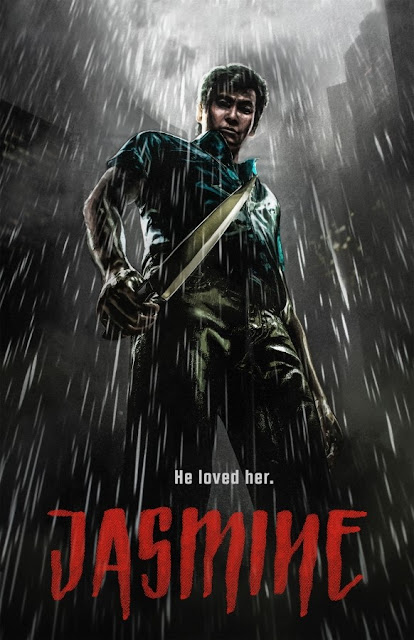 Jasmine is a Hong Kong based psychological thriller directed and written by Dax Phelan that to me was very reminiscent of the style of Hitchcock. While set in Hong Kong the majority of the film features English talking characters with much of the non English unsubtitled until towards the films end. It follows the singular viewpoint of the main lead with him appearing in every single scene. It works by giving us a plot that on the surface is easy to follow, yet creates such a miasma of doubt that you question whether what is unfolding on screen is actually as plain as it appears.

Leonard To (Jason Tobin) returns to his home city in Hong Kong a year after his wife was murdered in order to try and pick up the pieces of his life. A chance visit to her grave however results in discovering a stranger also there (Byron Mann) and soon Leonard becomes obsessed with finding out just who this man is, and more importantly if he is the murderer of his beloved wife...

Where Jasmine excels is giving us such an interesting character in the form of Leonard. He is a flawed hero and the film never goes away from showing us this. He comes across as desperately lonely as can be seen with his introduction when he makes super awkward conversation with an Australian duo he meets. He is also shown to be a liar, believably telling his one old acquaintance Grace (Eugenia Yuan) he has gotten a job when from the relentless shadowing of him by the camera we know for a fact he hasn't. Leonard comes across as the annoyingly friendly guy you just can't get away from at work, yet this earnestness also creates a character who at times unavoidably becomes pretty creepy in his own way, especially in the film's second half when his obsession with the stranger he discovers leads him down an unstoppable path of revenge. There is also some doubts as to his actual sanity, several scenes have him becoming overwhelmed by disparate voices in his head, while it is alluded that he had been in a sanitarium after trying to take his own life some eight months back. However despite all these flaws he comes across as someone you can't help but want to succeed, especially if what he believes turns out to be true.

There was a real sense of Memento to the flow of Jasmine, brought to my mind The Machinist too in the super focused viewpoint of Leonard, yet there was also so much evidence that constantly goes against any misgivings you begin to have about the character. While Jasmine gives you plenty of evidence to suggest something is off this always seems to be balanced with evidence that shows that things may well be what they seem. From Grace we know Leonard had a wife, from his constant answer phone messages he leaves on a detectives phone (the guy in charge of the murder investigation) we know that a murder did in fact happen and that there is no suspicion of Leonard's involvement, so it all just leads to massive confusion. My one main complaint with this method is that when the reveal occurs and we find out the definitive truth I was left slightly confused over some aspects of what had happened.

Virtually the whole film is shot by handheld camera yet this is not shaky cam land, instead this manages to give a more raw feel without losing out on quality. I loved how the camera is never off of the lead, except for POV shots he is constantly there with an almost claustrophobic voyeuristic feel. The directing also excels at giving you vibes about the minimal cast, the stranger is a prime example, he seems the opposite of Leonard in every way and the camera uses this facet to great effect forever making him seem suspicious. The soundtrack perfectly compliments this thriller with a constant feeling of mistrust and paranoia maintained throughout. While the pacing is spot on with a ramping up of events at the halfway point I did feel that some of the stalking later on in the movie goes on for ever so slightly too long with my attention on the verge of wandering, however it pulls it together nicely for the conclusion of sorts.

Admittedly not the best review but I hope this conveys some of the intrigue I felt watching Jasmine. The mystery kept me glued to the screen throughout and despite some familiar feelings from other similar thrillers I felt the location made this stand on it's own. Theatrical screenings of Jasmine started on June 16th, while it is getting a DVD and Digital release in July thanks to Indican Pictures. Check out the trailer below.