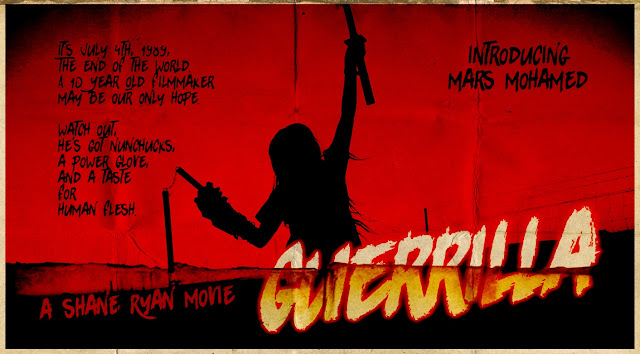 Guerrilla is a short film that was directed and written by Shane Ryan (he is an actor appearing in Samurai Cop 2: Deadly Vengeance among others, and has a whole host of film making credits to his name). I didn't know what to expect going in to this but I was impressed by what I did find, even if this feels more like a 13 minute music video/trailer mash-up than an actual fully fleshed piece.

Set in 1989 a failed rocket attempt results in a strange virus being released over an American town. Everyone affected by this virus exhibits signs of extreme aggression and with the chemical air borne no one is safe. That is except for one small boy (Mars Mohamed) who is somehow immune. Getting tooled up with his Walkman, Nintendo Power Glove, and armed with a sword and a nun-chuck he sets out on his bike to see if anyone else has survived...

From the fast sweeping editing and stylised images this felt very much like an instrumental music video, it became quite trippy with the way the scenes seemed to flow in time with the music. Starting off there is a little introduction that sets up the tone of the 1980's perfectly. Roller skating, pinball, fireworks, and fairgrounds, all captured the movie like feel of the time so well. I thought this was going to be quite an all ages film so was suddenly jarring to see a title card come up and the whole tone of the film change slightly to an apocalyptic landscape full of death.  Each new scene in this short has its own title card to explain the changes going on, so we have quite a few different things going on with both elements of horror and homages to the classic films of that time. There is even a small training montage fitted in which was cool to see. 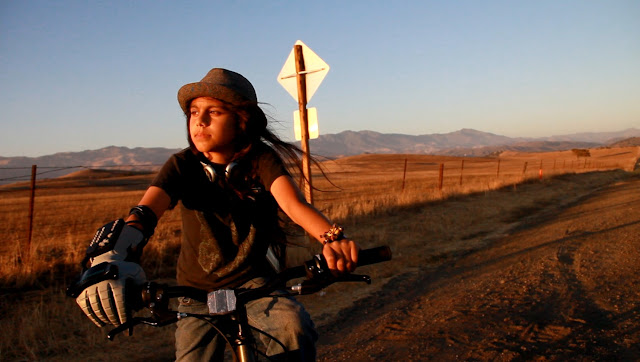 It was slightly difficult to know just what the virus did to people, it clearly shows people immediately becoming infected once they remove gas masks by vomiting up blood, but other infected show up later who don't appear to exhibit any evidence of blood on themselves, so I think maybe it was some sort of mild rage style disease? Either way gore is on the menu, and was delightfully over the top with fatalities resulting in gallons of blood pouring over the deceased, though the actual moments of impact occurred off camera. There is a feeling of grind-house with elements such as our hero eating corpses, and the lashings of blood suggesting that feel appropriate to that genre. Guerrilla finishes on a 'to be continued' message so will be interested to see if this is ever revisited or if this was a nostalgic one of in this universe.

While not a conventional film; having as it does no dialogue, or sound of any kind outside of the music and with a feeling of being a lengthy kaleidoscopic film trailer, this was still a lot of fun to watch. Visually this looks the part with some nice editing, while I loved the eighties synth soundtrack that was a perfect accompaniment to the happenings on screen.