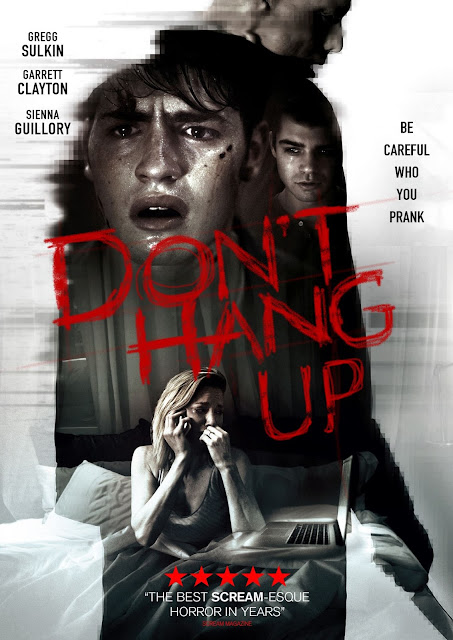 Don't Hang Up is Damien Mace and Alexis Wajsbrot's first feature length film they have directed together, and it feels very much a throwback to horrors of the late 1990's and early 2000's. As such there are a few elements that feel overly familiar yet despite this, this was still an entertaining horror.

Sam (Gregg Sulkin) and Brady (Garrett Clayton) are two online pranksters who specialise in prank calls. One night they have met at Sam's house for an evening of drinking when they get a mysterious threatening phone call. At first they think it is someone playing a joke, but it soon becomes apparent this caller knows exactly who the two boys are, and that his threats are very real...

The opening montage of prank calls show just what sort of people the main characters are. They show complete lack of remorse for any of the nasty pranks they play (such as convincing a woman her home has been broken into, or telling a man his wife has died in an accident). Due to this I felt it would be harder to care about them, yet on the other hand more enjoyable to see them get their comeuppance. For most of Don't Hang Up it is just the two characters of Sam and Brady. It kind of reminded me of the introduction sequence to Scream, but spread over an entire film. The antagonist primarily communicates with his victims by phone, using Sam's TV and laptop to show the two proof of his threats. It does make the usual "Just leave the house or call the police" mantra I would usually have redundant early on when it is shown the caller has blocked their phones, plus warned them if they leave then people they love will be killed.

While this was a decent horror in the 'turn your brain off at the door' variety (escapism, especially nowadays is always welcomed so that's not a criticism) I did find myself at many points accurately predicting twists, or at least not been very surprised when they happen, due to seeing them in other films. There are a couple of the bigger twists from the Saw franchise for instance, while another from The Dark Knight seemed very obvious to me also. Regardless of that one of the twists was neat enough in a Black Mirror type of way. This also reminded me of Unfriended and Panic Button in parts, especially with the whole pranksters getting their just desserts. With so much familiarity to other horrors it can't help but take away from the enjoyment a little bit, it is good then that this is made in such a solid way. 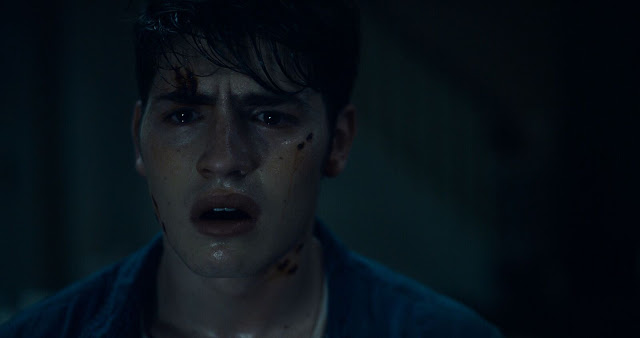 There are a couple of moments here of editing and directing brilliance, one moment in particular really stood out. With Sam upstairs checking under his bed the camera (upside down) then moves out from under the bed, rotates, then pulls back through a closed window out into the rainy street, it then travels outwards to inside a parked car, before then travelling back to the house, in through the front window to observe a scene with Brady talking to the caller, then back up the stairs to Sam. This shot all seemed like it took place in one fluid movement, it was super impressive! Also of note were the blood effects, plenty of the red stuff flying around. The two main actors were not bad, it was just as I said earlier there characters were such huge wastes of spaces I didn't really care about them at all. The whole crux of the villains plan seemed to bend on them going against each other, but they are such 'bro's for life' that there wasn't ever a real hint of that happening. Sometimes I found the way they were reacting to the unfolding situation felt a bit odd, especially Brady who becomes really silent and kind of irritating with his non communication. Of the antagonist it was hard to feel any real fear for him, due to him mostly being on the phone. When he does appear it is fleeting and seemingly just to spout exposition, a nice reveal but part of me thinks if his motives had just never been explained he would have come across as more creepy.

While Don't Hang Up is by no means an essential watch it is still a fun horror that despite not having too many ideas of it's own manages to be a neat little package that was well made and didn't outstay it's welcome. Don't Hang Up is coming out on DVD 12th June, and on Digital 26th June thanks to Solo Media and Matchbox Films, check out the trailer below.

Posted by Daniel Simmonds at 04:55