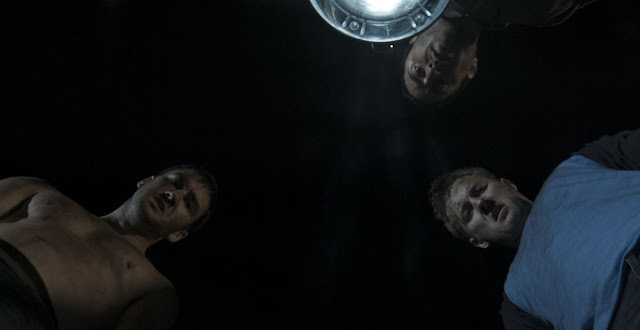 An additional news post today, and mostly because I forgot to include the news about this in my blog post I put up yesterday, plus it makes for a quick post on a day which has seen me busy decorating a room that is to be my office. So indie horror film Dark Cove is now available to watch through VOD in the U.K and Ireland, having previously only been available to watch in North America.

Dark Cove is directed and written by Rob Willey and is about a group of friends who go on a camping trip to Vancouver Island. There they befriend two Australian surfers, but a night of partying takes a dark turn and soon the group find themselves pitted against both man and nature.

The film had a budget of just $25,000 yet is stated to still have an impressive look. The trailer is included below, it does look like a lot happens, maybe a cautionary tale about drug use, or at least a cautionary tale about taking drugs around a huge burly man who is the very definition of dangerously psychotic in appearance. Check out the trailer below and if you like what you see then  you can head to iTunes or Google Play to rent or buy it for yourself. I do have a screener of this so shall be putting up a review sometime in the next few days most likely.

Posted by Daniel Simmonds at 08:06