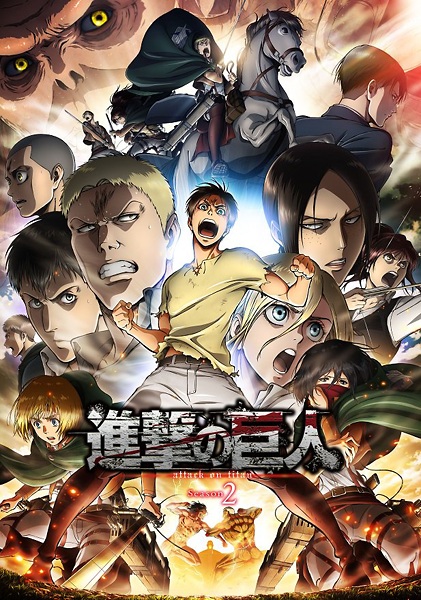 While I did think the first season of Attack on Titan was good I also admittedly took a long time to get through it. Thinking back it was a show that I liked, but not one I really loved, it was more the whole set up that interested me rather than what at times was a slightly dull show full of characters I mostly either despised, or straight up didn't know who they were. Four years later and season two has finally dropped, though it is a real shame at first glance that this second round is comprised of only twelve episodes compared to the first seasons twenty five episodes. However that turns out to be the antithesis of my blog for it really is quality over quantity this time around. Spoilers for season one are bound to follow.

Attack on Titan is a world in which humanity was nearly wiped out in the past by huge people eating Titans. The survivors built a huge wall behind which they live out their meagre existences. Season one took place over the span of five years - from the invasion of the dreaded monsters right up to the capture of a spy who secretly had the power to turn into a Titan. It is all the more surprising then that the whole of season two takes place over just a couple of days, with the capture of the enemy spy leading to a ripple effect of more insidious surprises within the ranks of the survey corps (the branch of the military whose mission is to retake the lost land back from the Titans), as well as a new outbreak thanks to the machinations of a mysterious intelligent beast Titan. 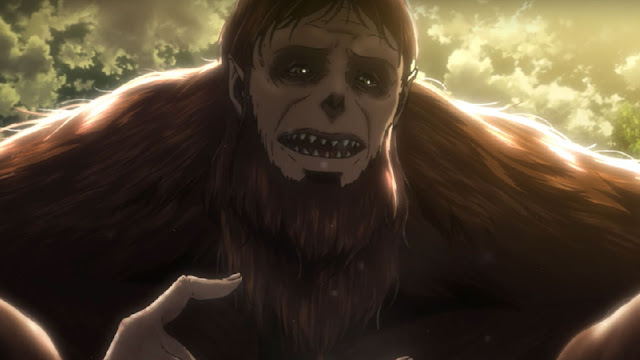 Not only is season two a heck of a stronger season but it also contains the best episodes the show has yet managed to create. While I did like Attack on Titan before, now I love it, each episode is perfectly crafted and feed so well into each other. In general the format has various episodes following disparate soldiers who are out investigating the appearance of titans within the unbroken wall they all live in. This exploration focuses on a few different bands who set out to try and find where this wall logically must have been smashed. Meanwhile main lead Eren Yeager heads out with best friends Armin and Mikasa as well as a few others to return to his childhood home. Along the way these disparate people all get brought together where huge revelations are discovered.

There is not a single bad episode here, the worst of the lot in my mind is 2.2 'I'm Home' that mainly follows the food loving Sasha as she heads to her home and discovers a titan there. Even this episode was good though, for me mainly because it featured a Titan that was 'only' about 15 foot tall, I didn't even realise they could get that small and so that was cool to see. Meanwhile we have what was my favourite episode; 2.4 'Soldier' that is almost self contained and is pure undiluted horror. This whole episode takes place in a tower under siege, the soldiers trapped within have to fend off the relentless assault of the hungry Titans resulting in quite a few casualties in very bloody fashion. The sight of a soldier being pulled apart while begging for their parent was harrowing, and there was a fantastic shot when a door is opened to reveal a still image of a Titan ready to pounce; chilling! 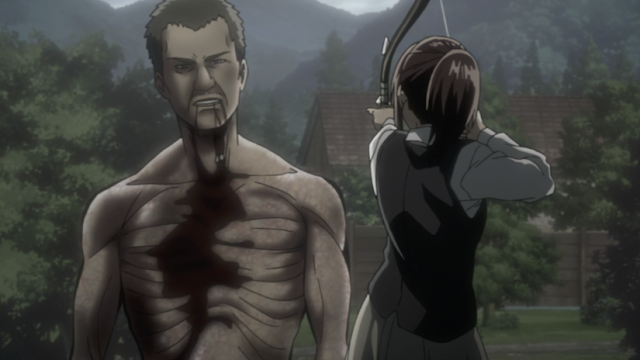 Towards the second half of the season the plot narrows down onto Eren and his colleagues and delights in constantly ending on a cliff hanger; a device that I loved but have heard some people complaining it was annoying to keep doing that. Saying that me and my friend did end pretty much each episode shouting "no!" at the TV knowing we would have to wait seven full days to get a resolution. This show just feels so fresh, and even unique in the way it tells it's stories, there is no better show of this than in 2.6 'Warrior' whereby a huge, huge reveal that bounces back all the way to the very first episode of season 1 takes place in the background of a scene and was so subtle at first that I missed it and had to rewind. To have such a gigantic big of plot occur off camera was crazy, I ended up re-watching the whole episode, it really makes a difference knowing what you know and seeing all the little clues that the first time viewer would not see at all.

Finally and sadly the season had to come to it's brief end on finale 2.12 'Scream' and I can see in terms of final episodes it really wasn't bad, there was another fantastic bit of plot development and the feared for intense cliff-hanger was instead of more calm and sedate one that pretty much just confirms the story is yet to be over. I loved season 2 of Attack on Titan, this time around it just gripped me, everything up to and including the awesome credit sequences. Sure it is a real shame it is less than half the length of the one before it, yet with not a single bad episode to be found I was totally captivated.