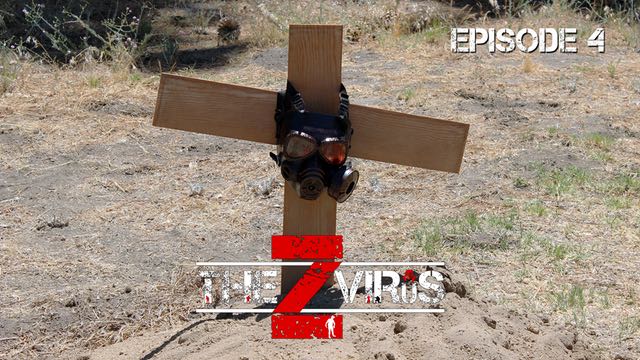 By this point of The Z Virus I am no longer surprised when this low budget zombie show turns out to still be good. While this is arguably the weakest episode yet there is still plenty here to recommend with a few scenes in particular that really stood out. It seems to be ramping up now it is heading to the final stages of its six episode run. Spoilers for previous episodes are bound to occur.

With the mayhem of last night fresh in everyone's minds Alex (Freddie De Grate) must decide if Zac and Apple are allowed to stay in his secure home or not. The arrival of a panic stricken, and injured man changes up the priorities to something else entirely for the whole group...

The reason I say this is perhaps the weakest episode yet is due to the fact that the majority of About Last Night's run time concerns conversations between both sides of the divide; Alex and his wife, and Zac and Apple. These conversations are full of pretty cliche quotes, while the directing of the camera focused on whichever character is speaking felt a bit plain. With Apple being mute though the scene with her and Zac is pretty cool, as Zac is responding to her subtle facial expressions as if she is conversing back with him. It did feel a bit strange that Alex is so accommodating to the people who (however justified) murdered his friend only the night before I have to say.

I felt that by this point with no zombies in either of the last two episodes they needed to make an appearance here as the shows title The Z Virus was becoming a bit tangential. Happily as soon as I thought that we do finally get to see the undead once more. With the entire group knowing nothing about that particular facet of the disaster it leads up to a great cliffhanger with basic mistakes being made that really can be forgiven for once. Regardless of any issues I had with this episode it is still darn enjoyable, I am still impressed with the quality on offer here and eagerly look forward to seeing the next. The Z Virus can be seen at TheZVirusSeries.com, ScreenMagicTV.com, Amazon Prime, Vimeo On Demand, and on the ScreenMagic TV Roku Channel.