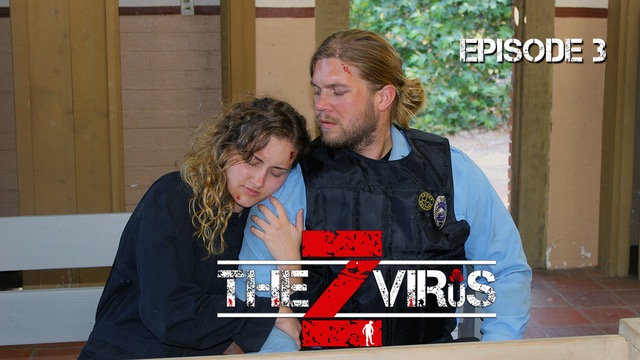 The Z Virus is a zombie web show that features episodes of around ten minutes in length each time. I enjoyed the first episode 'Bunker Fever' and was happy to see that episode 2 'Uninvited Guests' was even better. Each and every time I sit down to watch this I fully intend for the creators to drop the ball, and that the previous greatness was just a lucky fluke. For a show with an obvious low budget this shouldn't entertain as much as it does, yet once again I am genuinely surprised at how darn enjoyable and well paced these are. There will be inevitable spoilers for the previous episodes here.

The third episode takes place in the secluded house of Alex 'AJ' Johnson (Freddie De Grate) where he, his wife and daughter, neighbour David (John Kviklys), and two strangers; Zac and Apple are holed up. Due to the hostile introduction Zac and Apple gave in episode 2 tensions are running high, with David convinced that the duo know more than they are letting on...

In just ten minutes a lot of ground is covered with both character development, flashbacks, and action thrown in with more civil moments. De Grate continues with his quiet aura of respect he generates, but it is the character of David who has the biggest change. In episode 1 all we saw of him was a lone man exploring the strange new post meteor strike world. Here we get to see what type of a man he actually is, and it turns out he is a conspiracy nut with Kviklys channelling John Goodman's Howard from 10 Cloverfield Lane. For all of a few minutes the viewer along with the characters harbour suspicion about the origins of Zac and his companion, yet his story is then corroborated to the viewer by an interesting flashback sequence that involves some pretty nice juxtaposition of cold blooded murder alongside a peaceful mural in a church.

It was good to finally have an episode where I didn't notice any sound issues (both the previous ones had featured muffled dialogue at times). This is the second one in a row not to feature any undead whatsoever, again strangely I didn't mind as this lack of zombies actually fed into one of the story lines going on. This led up to the start of a nice reveal that is altered with a cliffhanging twist that I certainly didn't expect. The Z Virus at times feels like it is a perfect condensation of The Walking Dead, from the title sequence alone it is obvious that was an influence, yet so much ground is covered in such a short amount of time that it is hard not to be impressed. I really hope the rest of this six episode season continues to surpass my expectations. The Z Virus is available to watch at TheZVirusSeries.com, ScreenMagicTV.com, Amazon Prime, Vimeo, and at the ScreenMagic TV Roku Channel.

Posted by Daniel Simmonds at 09:19