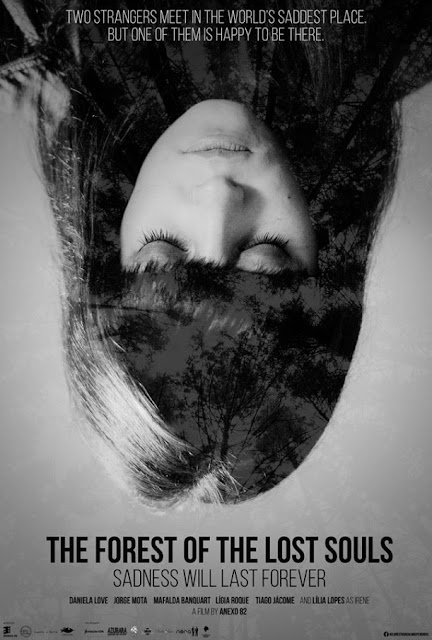 The Forest of Lost Souls (A Floresta das Almas Peridadas) is a Portuguese horror film that was written and directed by Jose Pedro Lopes, was shot entirely in black and white, and that has been described as a coming of age slasher. I wasn't quite sure what to expect and so the transition this follows from philosophical discussions about suicide to elements of the home invasion genre took me by surprise. Despite some brief downtime this stayed compelling right up until the very end.

Planning to kill himself Ricardo (Jorge Mota) has travelled to a remote forest known locally as 'the forest of lost souls' as it is a popular suicide spot. He inadvertently meets a young woman; Carolina (Daniela Love) who says she is also there to end her life. The two strike up a brief friendship of sorts and take a walk around the woods and discuss just why it is they both want to die, and the best way to do it. For Ricardo it is due to him feeling like he has failed his wife and daughter, the far more prepared Carolina has more unclear reasons, her motivations for being there may not be what they at first appear... 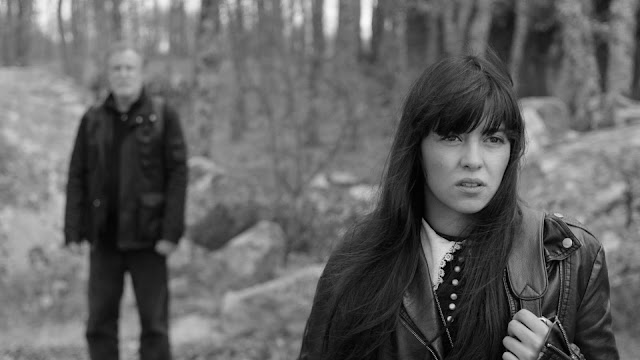 This film remains consistently good throughout it's 70 minute run time, it starts off intriguing and despite a slight change in horror genre it remains interesting. The subject of suicide, and of the effects that has on the loved ones of people who kill themselves is the main topic, as such I wouldn't describe this as feel good, and there certainly is not much here that could be described as positive. The first half of this is set out in the woods, this was probably my favourite part as I enjoyed the interaction between world weary Ricardo and the younger girl, with her mockingly calling him 'Daddy', and him thinking her very immature, yet both united by a similar goal. As such both are able to seem to be honest with each other about the subject. The second half sees a shift in gears that then follows Ricardo's daughter Filipa (Mafalda Banquart) and the problems she has after the suicide of her sister Irene some months previous. This part is more traditional in a sense but led to more moments of just one character on screen, so long scenes of silence as she walks around. This would probably be the part where my attention ever so slightly wandered, yet it was essential for world building, to show through actions what Filipa's state of mind was.

The Forest of Lost Souls is in Portuguese with English subtitles, it was good to see they are clear and decently translated as the whole philosophy of the first half would have been hard to follow otherwise. Obviously I don't speak the language but regardless the actors all seemed pretty great, especially Love who had the more challenging of the roles with her nihilistic Carolina. The black and white is a perfect fit here, a very crisp and clear look to this that added starkness without getting in the way of detail. Also of note is the great soundtrack, it was just perfect throughout, I especially love the introduction credit sequence that takes place in a forest made out of paper mache. There are elements of art house here, with the topic, the look, and the long single shots that build up the atmosphere, rather than a kinetic mish mash of different angles. 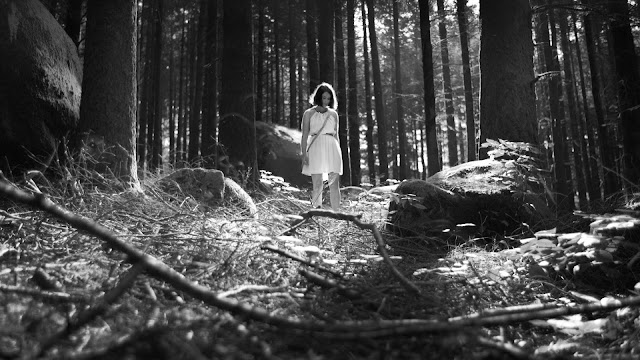 I enjoyed my time with this movie, it had some nice twists to it and turned into something far different to what I initially expected. The plot is slight, but is clever with the way it threads different scenes with different characters together to slowly reveal more of what is going on for these people. It ends on a more typical second part, but even then the low mood and sense of sadness permeates consistently. The Forest of Lost Souls is due to make it's UK debut at the Triple Six Horror Film Festival taking place in Manchester at the AMC Centre on May 27th-28th, if you're in attendance this is not one to miss seeing, check out the trailer below...

Posted by Daniel Simmonds at 06:07