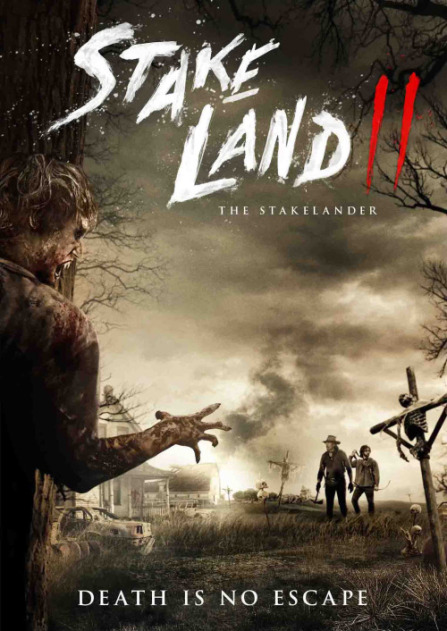 I have fond thoughts when I think back to post apocalyptic vampire film Stake Land, yet until I read the Wikipedia entry prior to watching this sequel Stake Land II: The Stakelander I would not have been able to tell you a single thing that occurred in it. This new entry in the series pretty much carries on business as usual with the same sombre atmosphere built up as events run their course. Spoilers for the first film are bound to follow.

Martin (Connor Paolo) made it to the promised land of New Eden at the end of Stake Land, along with his new found love Peggy, while the vampire hunter Mister (Nick Damici) headed back into Stake Land to battle the undead. A good few years have passed and Martin (now in his 20's) is married and has a young daughter. However one night vampire worshipping cult The Brotherhood attack New Eden, along with an intelligent female vampire that is able to control the more feral of her kind. During the attack Martin's wife and child are slaughtered, wanting revenge he heads south to search for Mister... 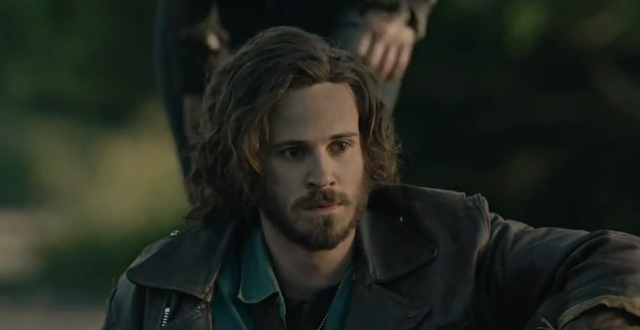 So this sequel carries with it much of the same flaws and positives that came before. Again there is a huge sense of loss in this ruined world, sad acoustic guitars play, there are long sweeping scenes of devastation that once more brought to mind the world of The Last of Us. The first time around I felt the budget seemed a bit small to be able to convey the huge action scenes it went for. The same is true this time around with the action relegated to brief (though awesome looking) scenes of violence. Though the special effects, especially for the vampires are top notch I had the feeling at times that what I was seeing was nearly what you would see in some made for TV horror series rather than a feature film. That isn't to say any of this looks weak though, as well as great special effects there is some beautiful camera work, and good quality camera usage in general.

A complaint of the first film was that the antagonist was too much of a caricature of a bad guy and felt a bit out of place in the otherwise realistic setting (well as realistic as a post vampire apocalypse world can be). This time around the main antagonist is the polar opposite, the one eyed female vampire doesn't speak at all, and if not for the fact she barely features in the film she would have been fantastic as she has some powerful scenes, at least at the start. The Brotherhood are once again about in abundance though they fade more into the background here, I found it interesting how their beliefs had changed slightly, and how they had come to worship this female as their twisted messiah. On the good side again there is a bunch of different characters that Martin and Mister team up with, these include Juda; a young member of The Brotherhood they capture, as well as Lady (Laura Abramsen) who is a feral girl that befriends them. Both the two main guys do great jobs, I loved that they kept the same actor for Martin, it was cool to see him playing the same person but now all grown up, where before he was an inexperienced teen. There was an interesting change in that he now more resembles Mister from Stake Land than the Mister portrayed here, the one of this film now very jaded, fed up with all the killing, and going soft in his older age.

Much like the first film the vampires of this series are very zombie like, feral and acting on instinct rather than having any degree of intelligence for the most part. Humans also feature a lot as bad guys with the usual assortment of crazies, cannibals, and cultists encountered along the path of revenge. While the plot is simple it goes along at an agreeable pace, though again the budget did seem to get in the way as some parts felt poorly paced, and some parts seemed to be there just to elicit emotion from the viewer. This very much has the feeling of a road movie once again, though without such a clear destination it was left up to chance for the story to play itself out.

While I wouldn't say this is a better film than Stake Land it is still a damn good sequel. Sure it doesn't fix a lot of the issues that came before, yet it is consistent in the tone it portrays, the world feels the same, the characters feel the same, and so it is like putting on a favourite jumper when you climb back into this world. Plus it features one of the best lines I have heard in a film for a good while, when Mister says to Juda "You better not be lying boy, cos I'm in a dick shooting mood". If you enjoyed Stake Land there is no reason to avoid watching this one, that's for sure.