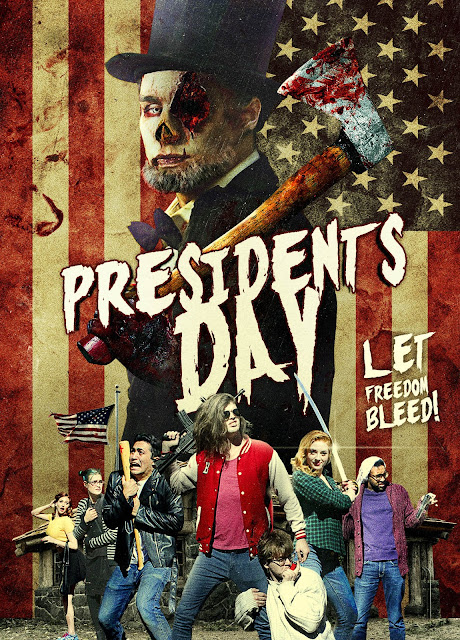 President's Day (from Brain Damage Films) had such an almighty stupid idea behind it that I figured it would be a very hard film to mess up, even if it turned out to be poorly made crud it would be very hard to make this boring. Thankfully this comedy horror while not having the highest budget does have some legitimately funny humour to it, I found myself laughing out loud on at least a few occasions.

A group of young friends decide to head out to a remote cabin in the woods to celebrate President's Day. These include a variety of stereotypes that include a jock (Jud Zumwalt), a geek, a slut, an alternate girl, a cool guy (David Zuckerman who also directed and co-wrote this), a girl next door type, as well as a token black guy (Dax Hill). These friends have not been at the cabin that long before they come under attack from zombies, but these are not zombies of the usual type, instead each and every one is a former American President! To survive the night the gang must band together and bring their knowledge of American history in order to defeat their iconic foes. 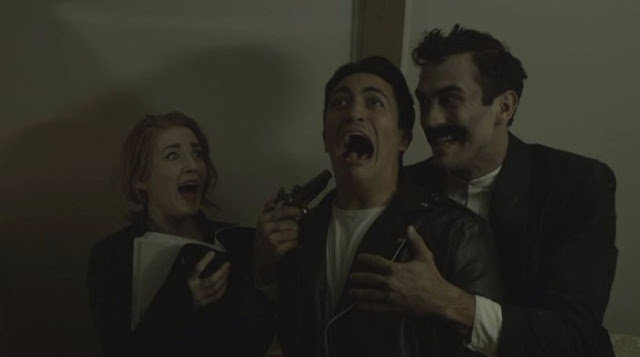 This movie is extremely silly, it is just ridiculous how some of the characters act, while the conversations and things they do are sometimes hilarious. The jock Brett for instance is very stupid, often resorting to high pitched screaming and shouting. His best moment comes when he finds someone dead soon after asking them to get him a beer, in shock he starts repeatedly screaming 'get me a beer!' in increasingly high pitched tones, was just so funny (you had to be there). Another time a former couple are arguing about when they were together while sad music plays, then it is revealed that they only dated when they were in pre school! None of the humour is intelligent, yet it is so baseline that it is pretty universal. I personally loved that President's Day doesn't rely on lame sex jokes for much of it's humour. Occasionally there were some mild ones, but even the two sex scenes are so brief and mostly off camera that they don't ruin the momentum. Saying that at times this did seem to pay tribute to other comedy horror's, in particular one scene has a girl running through the woods with her clothing randomly getting ripped off by branches, this was near identical to a part from the Scary Movie.

The second facet of the humour is when it references classic horror conventions, and gently pokes fun at them. Clarence (token black guy) starts off the film in a found footage style, explaining to a friend how he is going to document every single moment of their trip away, I admit my heart fell slightly, but then lifted when the batteries immediately die and he sadly puts it away never to be seen again, Characters often seem self aware, or at least have the knowledge of how events will play out, such as informing which of the stereotypes have no chance of surviving, while one of the final survivors realise they are only still alive because they were a virgin. Right near the start one of the group moves on the plot by saying (to ad-lib) "Now we're finished establishing ourselves let's get going", so often self aware. This awareness is also shown with several classic lines taken from other films such as Aliens, The Shining, and a few lines from Shakespeare's Hamlet. I did enjoy how the stereotypical characters had alternate sides to them, the jock revealed to be a closet gay for instance (not portrayed in an insulting way), while the cool one turns out to secretly be a coward just putting on an act. 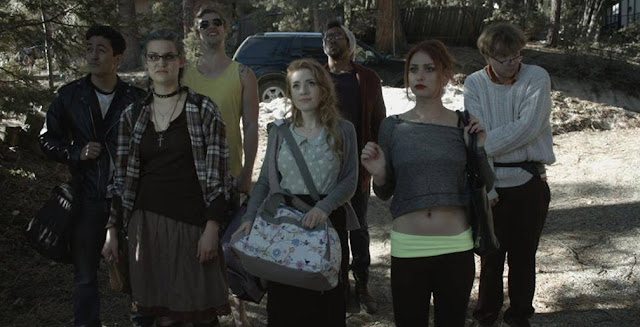 The third and final part of the humour is about the President's themselves. A lot of knowledge is assumed for who the different ones are, maybe that is easier to know if your American, but as an Englishman there were only a handful of the many ones shown here as zombies, or mentioned in passing (28 in total) that I had heard of. There are many jokes about them, and about what they achieved in office, with some complaining that none of their victims even know who they were. You get JFK with a baseball bat, Nixon (complete with comedy large nose) duel wielding pistols, Roosevelt with a hunting rifle, George Washington and Abraham Lincoln both armed with axes, and a multitude of others. These zombies while rotting to various degrees are otherwise more movie maniacs than shambling undead. They talk, they run, fight, use weapons, and are out to kill, not out to eat their prey. They are even able to be killed in a more normal way, such as one who has his neck broken, and another one who is stabbed in the gut. As such they have a lot of character to them, they get a big part of the screen time with them talking amongst themselves, as well as conversing with the teens.

Sometimes with comedy horrors the horror is out in front with the humour restricted to a minor role, not so here. Essentially this is a slasher, but with a bunch of slashers rather than just one, yet the set up is constantly so stupid that there is no moment where there is even an ounce of proper horror to be seen. One area where I felt this did falter a bit is in the death scenes. After the first death where someone is impaled with an American flag I expected inventiveness yet the cast are just shot and stabbed mostly. There was a pretty bloody stabbing scene, though the body then changes to a blatant dummy wearing a wig (that is not even the right colour for the dead person) whenever the body gets dragged that led to one of my laugh out loud moments. The special effects are fine enough, I liked how each President looked distinctive, and there were some nice intestine effects, and a fun decapitation, though a lot of CGI for gun shots (which worked in this comedy context). Plot wise it is mostly bare bones, I wish there had been more explanation for just how the President's came to be resurrected as zombies, and at times there is some pacing issues due to the amount that antagonists and protagonists converse amongst themselves. Saying that the action starts up before the film has even reached the half hour mark which makes for a nice change. 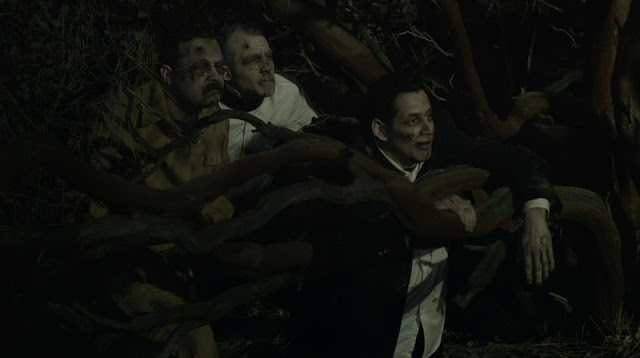 President's Day is inoffensively funny, while it doesn't hit all the time, it did enough to make for a fun film. Occasionally it felt the comedy did ruin any moments of proper horror, but then that wasn't the point of this. This succeeds in not ruining the great set-up, while the cast are all into their roles enough that no one stood out as terrible. This is too rough around the edges to be an essential view, but as a piece of escapism from bleak reality this was perfect. President's Day is available on June 6th on Amazon, iTunes, Google Play, Vimeo, Xbox, Steam, Vudu, and YouTube, while the DVD is exclusively from Amazon MOD.