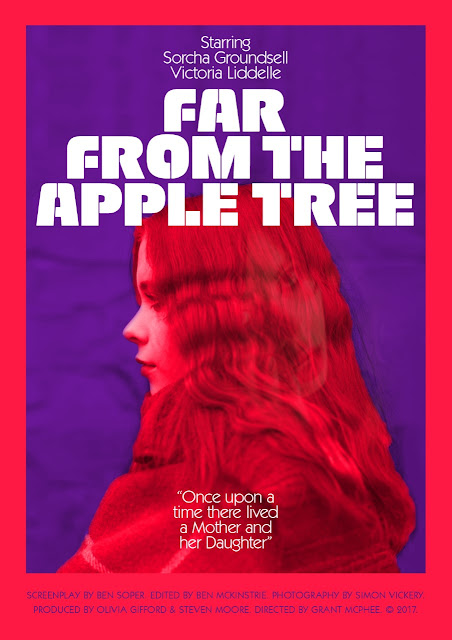 Far From the Apple Tree is Grant McPhee's latest feature length film (he was responsible for the unique feeling Night Kaleidoscope). This Scottish made film has been described as 'folk horror' (think The Wicker Man or Blood on Satan's Claws). It was filmed over just two weeks at a remote Scottish house for quite a small budget.

In the movie Sorcha Groundsell stars as Judith; a struggling artist who gets her dream job of working for renowned visual artist named Roberta Roslyn (Victoria Liddelle). While cataloguing Roberta's work she is shocked to keep seeing a girl who closely resembles herself, she learns that this girl is actually her boss's missing daughter Maddy. As she investigates the mystery of just what could have happened to this girl she starts to develop a new persona, and it comes to a point where she must decide if she is to leave her job, or continue and risk loosing who she is.

The press release states that 'Far From the Apple Tree is like no other movie - it's a unique and terrifying horror tale told in an engrossing and nightmarish dreamscape.' McPhee has proven he can make something different to the norm with Night Kaleidoscope and so hopefully he will strike gold once again here. I have included the trailer below, it may be one to watch out for.

On the subject of Scottish horror films there has been some publicity for upcoming Lord of Tears prequel The Black Gloves. For the first film there were a series of entertaining prank videos released where people were scared by someone wearing an Owl Man costume hiding in an abandoned building. It is pretty much business as usual here with some more unsuspecting members of the public coming face to face with the demonic creature. Check out the video for yourself;

Posted by Daniel Simmonds at 11:34