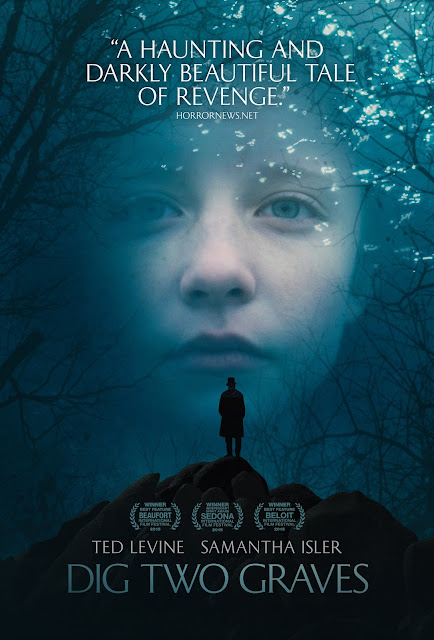 As I mentioned the other day I am currently out of film review requests and so I am in the rare position to watch whatever films I choose to. Today I decided to watch Dig Two Graves due to the fact it is an eligible contender for the 2017 Fright Meter Awards (that I'm a committee member of), and that it appeared on Netflix the other day.

Jake (Samantha Isler) is devastated after her older brother accidentally kills himself jumping off a cliff into a filled quarry. One day on the way home from school a mysterious gypsy (Troy Ruptash) and his two brothers appear and tell her that they can bring back her sibling from the dead, as long as she can find someone to take his place in death. In her grief Jake agrees, though it turns out that these three brothers share a tragic secret from the past with her grandfather; Sheriff Waterhouse (Ted Levine) and so may have an ulterior motive for offering to help her... 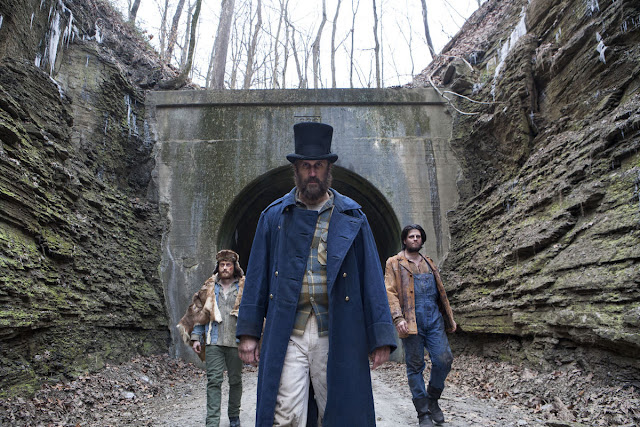 Dig Two Graves is quite a slow burn, nothing much of note happens until well over halfway through the movie. It is good then that this is a quality made film with good editing and directing to keep things at least looking nice. It also helps that most the actors are pretty good in their roles. In particular I was impressed with Isler who was believable as a sister in mourning. Levine also wasn't bad, he was likeable and layered, though it was only really in his scenes with Isler where he stood out, I loved the relationship those two had. Ruptash was the stand out character for me though, with his iconic top hat, and his strange mannerisms he stole every scene he appeared in. It helps that he magically appears out of nowhere nearly every time (with great use of editing to aid his appearance).

The horror in Dig Two Graves never really comes to the forefront, it is more the suggestion of dark magic, of gypsy curses than of any actual moments. We get a few rituals, some snakes magically appearing, but other than that the antagonists are all words and promises despite the menace they show. The film takes place in the late 1970's and so it is authentic in its look, but all throughout there are flash back sequences that go back to the prohibition era where Waterhouse was a lowly deputy following the orders of the then corrupt Sheriff. These past scenes are key to the overall plot of Dig Two Graves, the movie even starts in this place with two cops throwing bodies into the same quarry that Jake's brother dies in. The way these scenes are visited I found quite clever, a character walks into a building and as the camera pans over his body front and centre it goes from present to past seemingly without changing shot. It helped to give motivation for the antagonists, with a slow reveal throughout the 85 minute run time to show just what happened, and how they could be seen as being justified in their actions. 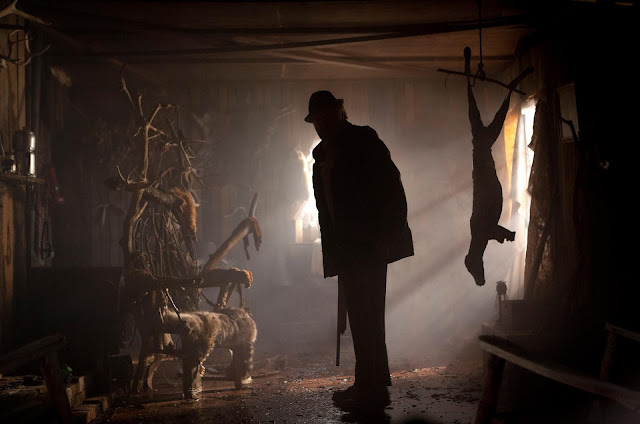 While I did like the look of this film, and how faithful it was to it's 70's back water American town setting I did find it to be a bit dull at times, and stretched out a little too thinly. If not for the performances of the core actors I think I wouldn't have liked this as much, they really do save the day. All in all Dig Two Graves wasn't a bad film, just not one that actually has much happen in it, also I have to say that title in the context of the film is terrible.