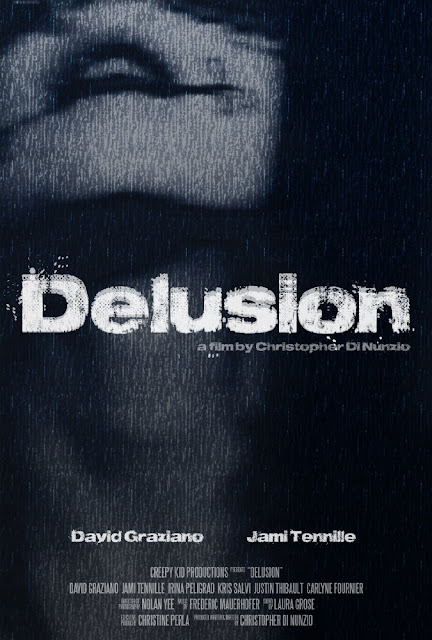 Delusion (written and directed by Christopher Di Nunzio) is an award winning slow burning supernatural horror that does a few things that feel different to the norm. First off in main character Frank (David Graziano) we have a middle aged man, not only that, but one who seems utterly normal. This is a nice change from the obsession with putting young, attractive leads front and centre. Secondly the horror aspect of Delusion is so slight that at times, aside from a few merely odd events this could almost be seen as just a pure drama.

Three years after Frank's wife dies he mysteriously receives a letter in the post written by her, so far so Silent Hill 2. The arrival of this letter brings a change in Frank's life, he starts to glimpse strange figures that only he can see, while his dreams are full of terror, with him being pursued by a woman with a painted face. A fortune teller warns Frank that something evil is out to get him, but will he take her warning seriously, or will he be the instrument of his own demise? 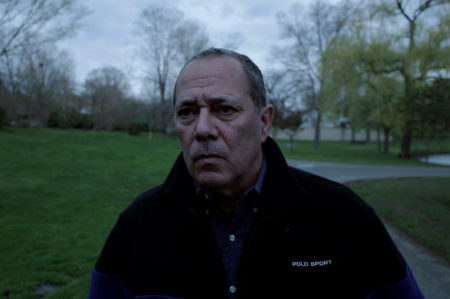 I can't stress just how fresh this felt purely down to the decision to cast such a normal looking everyday man in the lead role. While some of the auxiliary cast are not the strongest at acting (such as Frank's nephew Tommy) Graziano brings to his role a feeling of realism, he just comes across as a genuinely decent guy, one with barely any skeletons in his closet. His pastimes seem to include going to the park to skim stones in a pond, and chuckling to himself in the local diner, and while he allegedly has a job that he says he does virtually from home we only ever see him staring outside, or doing yoga. He is just such an average Joe. The side characters all bring their own peculiarities, enough to make them stand out. The best of these was the perpetually smoking, scarred man who delights in the Twin Peaks vibe he gives out (especially during the cliche, yet visually appealing and well edited dream sequences).

Delusion gets off to a bit of an odd start as the first ten minutes or so are just Frank and Tommy talking in various places about Frank's life. This seemed like a bit of an awkward way to fill the viewers in on what has happened up to the films start and I'm sure it could have been handled better. The plot was bare bones, yet I enjoyed how nothing is really explained too deeply, you are left to decide for yourself what is really going on with throwaway comments hinting at bigger mysteries. Just how Frank's wife died is never explained for instance, while the antagonist of this seems to be a pawn to a bigger power. At one point there is an insinuation that Frank is hallucinating the odd people he sees due to being off his medication that one character remarks seems to be for schizophrenics. This was an interesting aspect but due to a sub plot involving a fortune teller having a vision of him in peril you know right away that what is happening is real and isn't just a....Delusion so felt a bit wasted. It leads up to a dramatic finale that unfortunately abruptly ends leading to an unsatisfying feeling for me. 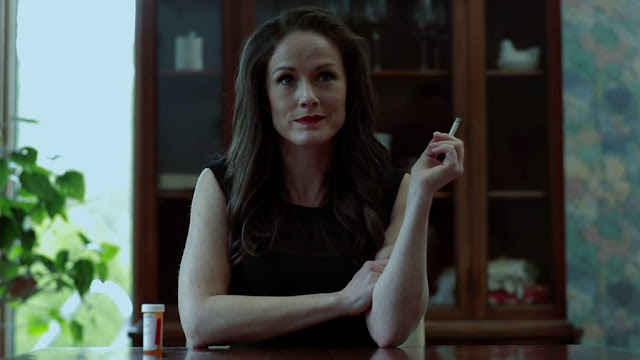 Not a lot really happens in Delusion, bad things occur due to a main character who inexplicably ignores very compelling warnings, while the horror is so slight that there isn't much of an opportunity to shout at the main lead for acting as he does. I guess the incidental remark about schizophrenia gives some breathing room for the actions of Frank. I enjoyed watching Delusion, it certainly was an interesting film, especially during the many talks around the concept of what happens to the spirit after death. It does have it's problems though, the rushed ending, the sometimes too obscure story, and some at times average acting bring it down a bit, but there is still enjoyment to be found here. Delusion has been picked up for distribution by Cinema Epoch and is now available to buy or rent in the U.S, Canada, and U.K via Amazon (free with Prime). Check out the trailer below and get a feel for if this is something you would want to see...