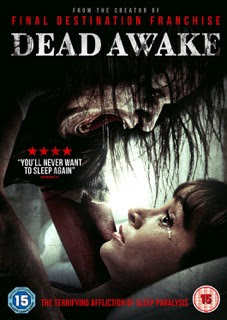 Dead Awake is what I would class a formulaic horror. It has at it's centre an evil antagonist being who the main character gets targeted by, and so they must research a way to stop it's hold over them, much like The Bye Bye Man, The Boogyman, The Ring, and countless others. This movie is very similar to the lot of them and while it isn't the worst example of this particular type of horror film it isn't really the best example either.

Kate's twin sister Beth (both played by Jocelin Donahue) is experiencing night terrors and she starts to become more and more convinced something in her dreams is trying to kill her. Kate, her parents, and Beth's boyfriend Evan (Jesse Bradford) all think it's just in her head but then one night she dies in her sleep. Soon Kate and Evan, as well as a friend of theirs are experiencing the same night terrors that Beth did, they discover that an ancient evil known as the 'night hag' has latched onto them and will kill them should they succumb to sleep. With the help of an expert in the field they set out to find a way to defeat this entity. 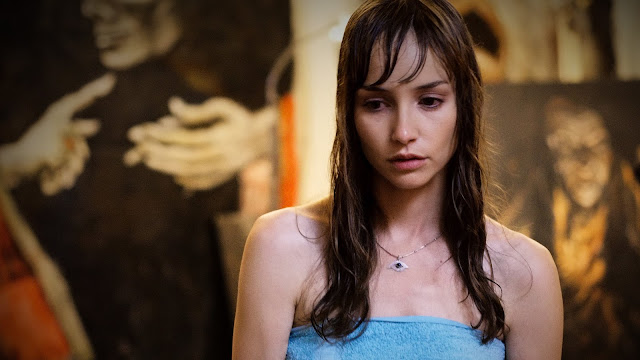 The myth of sleep paralysis being caused by a creature sitting on the victims chest is I think quite a well known one, and so I found it interesting to have a film made on the subject. Dead Awake does start off mysterious enough, Donahue does a good job in both the sisterly roles, and the cast in general are pretty decent. I especially loved Jesse Borrego (Dexter) as the strange Dr Hassan Davies, the quiet way he had of talking, and the emphasis he put on certain words made him stand out. However no amount of interesting characters (and well designed and decorated sets) can make up for the fact that the subject matter is what inadvertently stops this being a decent film.

The problem with basing your antagonist on a being that causes sleep paralysis is that this makes the key scenes of terror a tad dull. The victims being paralysed are literally just laying there, the most they can do is look around wildly and so there is no thrilling chases or action sequences, no screaming, or even bloodshed. The being causes death by strangulation every time and no end of A Nightmare on Elm Street style disguises on the creatures part can make it look anything other than identical each time it strikes. On that subject this does actually share many similarities with the Freddy Kruger series. The main characters have to keep themselves awake by any means necessary (adrenaline injections, energy drinks, cold showers), the antagonist can only attack people who believe in it (a cool notion, yet one already done in those films), and this even shares some similar scenes. For an example an early part has a woman being attacked while taking a bath, I really was expecting any moment a clawed glove to burst up out of the water! There is some slight variation with the creature able to mimic the appearance of people the victim knows, but when she is in kill mode she just looks like an old hag, one who can't do anything other than a slight growl at that and who resembles no end of spooky female ghosts from more prolific films. 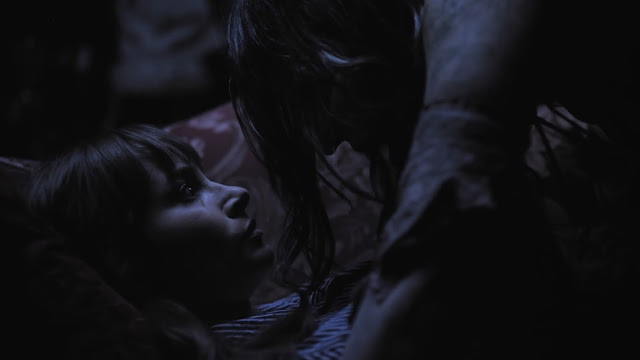 Dead Awake elevates itself from the bottom of the pile due to the quality directing and editing here, and the decent acting. I did like how the transition from sleep to attack happened, and the use of blur effects during these parts was pretty cool looking. I also appreciated this was based around adults rather than teenagers, and there is a good sense of mystery here, but the action when it comes is a result of ineptitude. On two different occasions a sense of urgency is fabricated by the clumsiness of key characters which had me doing a slight eye roll, while the finale is thankfully not over the top and goofy, but instead more low key, though perhaps too low key. All I can say about Dead Awake really is that it's ok, but there is nothing here to give you nightmares...or indeed night terrors. Dead Awake is released on DVD and Digital on Monday 15th May thanks to Solo Media and Matchbox Films, check out the trailer below.