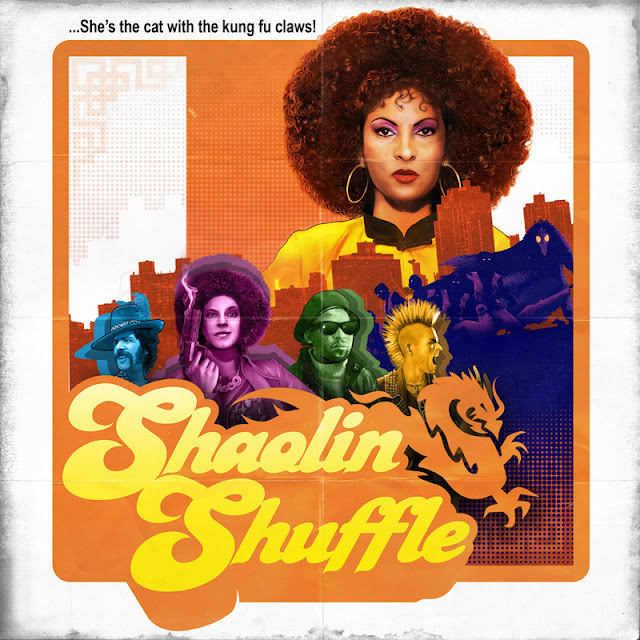 A couple of weeks back the latest DLC for Call of Duty: Infinite Warfare was released. This 2nd pack for the divisive latest entry in the series was titled Continuum and as usual included four multiplayer maps and one Zombies map. Again as usual it is the Zombies map I am obviously interested in here. The initial map Zombies in Spaceland! was set in an amusement park during the 1980's, it was awesome. The second map titled Rave in the Redwoods had a Friday 13th vibe to it and was set during the 1990's. Continuing the trend of different time periods this third map Shaolin Shuffle is set in the 1970's. For some reason the setting of the 1970's doesn't appeal to me too much and so I found my response strangely muted when this was first revealed. As always this is my first impressions, not a detailed break down of all that is in this map.

The story is again told via unappealing vintage cartoon type sequences. Having vanquished the chainsaw wielding psycho of the 1990's our four heroes step through a portal that transports them to 1970's New York, a film version of that city that is in the grip of not only zombie apocalypse, but a strange rat type man who is haunting the area. Each of the four characters again resemble fitting characters from the time period, and so Shasheer Zamata's Sally is dressed like a disco queen, complete with huge Afro, Jay Pharoah's Andre is a beatnik, Ike Barinholtz's A.J looks like a pimp, while Seth Green's Poindexter has the best look appearing as a punk rocker. 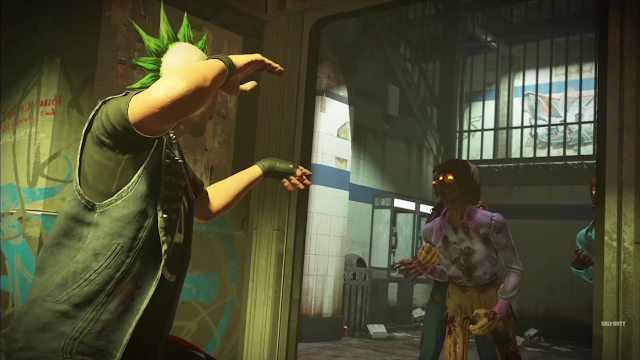 The map is probably the most confined of the lot so far, there is just the one open area with the map mainly comprised of lots of corridors both inside and out. You start off in a subway, of which there are two in the map, as well as a sewer area linking these. Up top there is a dive bar that plays punk music, as well as a nightclub that plays disco music and is made up of three largish floors. There is a dojo near the start where actress Pam Grier resides, and which is the most important new feature of Shaolin Shuffle. This time around melee combat is put front and centre as the most important way to battle the undead. Inspired by 70's kung-fu movies you are offered one of four fighting styles that include the way of the Tiger, Cobra, Dragon, and Crane. You can use this style once per round (replenished by drinking flasks dotted around the map), doing so puts you into your fighting stance, killing zombies with this activated slowly levels you up. Starting off you can merely kill enemies with punches, after enough have been killed you get the ability to throw shurikens, it is after getting a set number of kills with this that the fighting styles start to stand apart. The Cobra style for instance grants you the ability to summon up skeletons from the ground, the Crane lets you freeze nearby enemies, the Tiger style opens up black holes to suck in your foes. These styles all can get upgraded to a final devastating final level, the Dragon's final style for instance summons a huge ghostly Chinese dragon that flies around you.

Your main enemy as always are the undead, being in the 70's there are plenty of Afro sporting ones, as well as plenty of flares. The special round that occurs every five or so rounds brings with it neither exploding clowns, or powerful Yeti's but instead roller skating zombies who explode on contact. Initially I thought these were a bit too similar to the clowns from Zombies in Spaceland! but they are different enough in that in exchange for being weak there are huge amounts of them. It is not an uncommon sight to be surrounded by up to 15 of them coming at you from all directions. The intro cartoon featured a business man who mutated into a rat creature, I assume he will be the boss of the map but as of yet I have no idea how to find him. The pack-a-punch isn't too difficult to find, it resides inside a strip club, but to get in you need to find a flyer for the club, as well as a special coin to open up a peep show door, and finally a film reel to activate the projector (that takes you to the pack-a-punch room). There are also lots and lots of Majong tiles dotted around the level, these need to be taken to the relevant table of the same image. Each table requires three tiles but as of yet I have never completed a set. 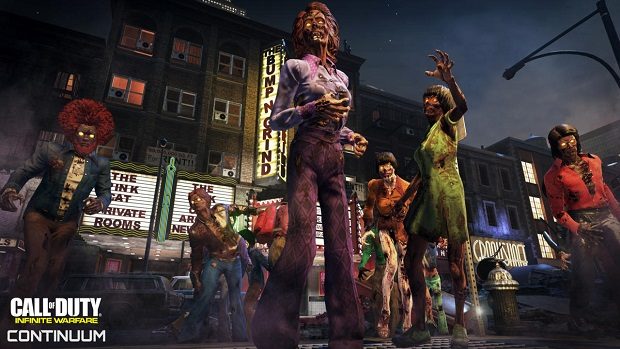 The map looks great with decent attention to details, from the rubbish strewn and graffiti covered streets and rooftops to the utter trash that is the pub (that features the option to trigger a lethal mosh pit for the zombies), to the colourful and clean disco. It seems like the smallest of the maps so far, yet I think it is more that the map takes place in a smaller area, as with multiple floors to a lot of the level it is bigger than it seems. Unfortunately this is by far the most buggy map, the less annoying of the current bugs is that sometimes zombies will spawn in an area you haven't unlocked yet making it pretty hard to progress unless you can force them to respawn (usually by heading off map). The more damning bug is that if you die and go to the Afterlife Arcade when you return you can no longer use your fighting skills. As levelling up the fighting stances is the main point of this new map it is pretty stunning this issue was not picked up during testing. Hopefully this will be fixed as it is very frustrating being penalised so harshly.

Regardless of the stupid bugs this is still a good map, for me Shaolin Shuffle is probably my least favourite map for Infinite Warfare Zombies. The focus being on Kung-Fu movies rather than horror means the appeal wasn't there for me, but I can't deny this looks great, plays great, and has the best designed appearances for the characters.
Posted by Daniel Simmonds at 03:17