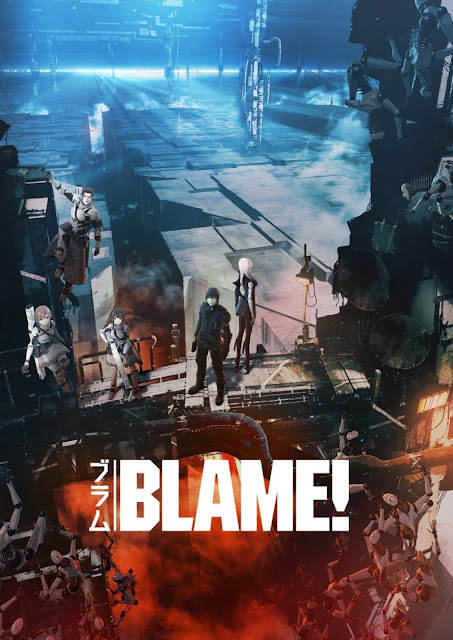 I had originally planned to watch horror comedy President's Day for review today, but I didn't feel in the right mood to do that. Instead here is a review of Blame! a new Netflix exclusive anime movie based on the 1998 cyber punk manga by Tsutomu Nihei. I love anime, it was one of my favourite things to watch, but I don't really watch many films of it, mostly just focus on the awesome series such as Attack on Titan and Berserk.

Blame! takes place in a post apocalyptic Earth, one which has had every square inch covered by an impossibly large city. Hundreds of years in the past a city creating A.I known as Safeguard was created, the people living in the city were able to interact with it via something known as a 'net terminal gene'. One day something with Safeguard's programming went wrong, it started seeing humans as intruders in the city and ruthlessly sent out murderous robots to kill anyone they found, at the same time the city started endlessly, and randomly expanding, a process that continues up to the present day. Blame! follows a small community living in a protected area of the city, due to Safeguard they are slowly dying off as food becomes more and more scarce and risky to locate. One day a mysterious stranger named Killy arrives, he ends up teaming up with the villagers as well as a friendly A.I named Cibo to locate a device that will let the humans once more take back control of the city and end the threat of Safeguard. 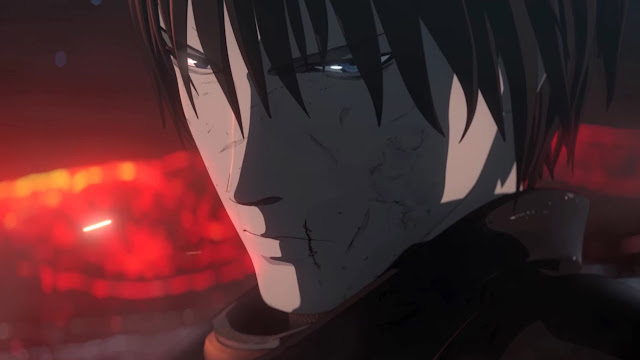 This has quite a bleak atmosphere to it from the get go, from the way characters act when people they love die you get the impression death is a constant for these people. The sheer scope of the city I thought was well realised, there are many shots of characters climbing through the construct with the view pulled back to show just how insignificant they are in comparison. It was cool to see that but I do feel Blame! didn't do as good a job of bringing the manga to life when it turns out this city is supposed to be so insanely huge that it long assimilated the moon into itself. As a stand alone for people who haven't read that, or seen the early 2000 show that information is not needed as much. I had never heard of it until I saw it on Netflix and still felt like I learned enough not to be confused. I loved the idea behind this and found it to be an original spin on the post apocalypse genre, though at times the story suffers slightly due to being rooted a little bit in the past with it's characters. It did bring to mind I Have No Mouth, and I Must Scream in it's dark and joyless image of a future world.

Killy is the typical strong, silent stranger, someone who appears and then vanishes, off to have another story. He reminded me in many ways of Violence Jack from the 1970's manga of the same name; a force of nature that existed as a means to bring about change. He was very cool, and had some great battle sequences but his limited speech made several points slightly frustrating when he would just stand there staring when people where trying to talk to him. Cibo was another cool character, I liked the mystery behind her, and the history she was able to bring to the survivors that explained a lot about their particular part of the world they lived in. The human side of things I had my usual problem with getting confused as to who was who, especially the group of girls, though at least the leader stood out. The Safeguard constructs were a great antagonist, creepy doll faced robots that scurried around on all fours, they brought a lot of horror to the movie as they were relentless and huge in number leading to some exciting action scenes. 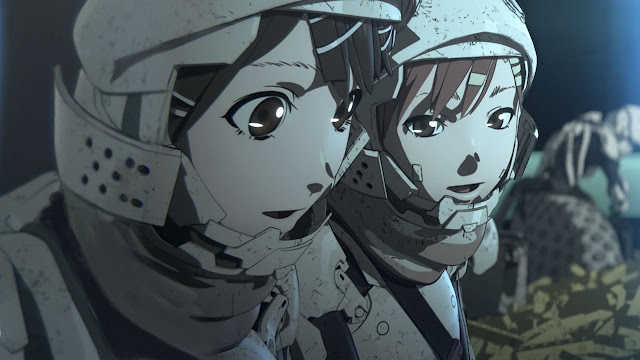 Blame! looks pretty fantastic, there were some many more frames to the animation than I am used to in anime, as such it gave a beautiful look to the events playing out, in particular the way the humans were animated made them at times seem almost live action, while explosions and smoke effects looked great as well. Also special mention goes to the sound effects, especially for a particularly devastating gun used in the finale that just made the most strange sounding effect. The plot was decent enough for a feature length film but I did feel it didn't go anywhere too surprising, I expected plot twists, and there were some for sure, but overall everything is pretty much what it appears at face value to be.

I liked my time with Blame!, it was an interesting world and one in which I would like to see more stories take place. I wouldn't say it was essential viewing though, in many ways it seems to play it safe(guard), yet it is really very appealing in the beautiful visuals it provides, and has some pretty cool moments, as well as some decent fight scenes. If your into anime then check it out on Netflix for yourself.