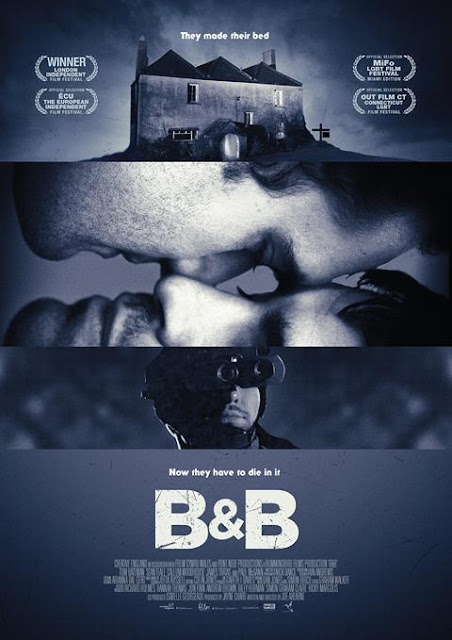 B&B is an award winning UK thriller that was written and directed by BAFTA-nominated Joe Ahearne (Doctor Who). It's a different type of thriller than I am used to as it explores what it is to be gay and discriminated against in addition to telling a pretty interesting story.

Marc (Tom Bateman) and Fred (Sean Teale) have returned to the countryside bed and breakfast which a year previous they had been refused a room, due to the owner; devoutly religious Josh (Paul McGann - Queen of the Damned, Alien3) believing homosexuality to be a sin. Having won a prolific court case they are back to claim the room they had previously been unable to have. However the same day they check in, so does a scary looking Russian man (James Tratas) whom Fred starts to suspect is there purposely to do them harm, a notion that gains weight when they discover the suspicious high tech equipment he has with him... 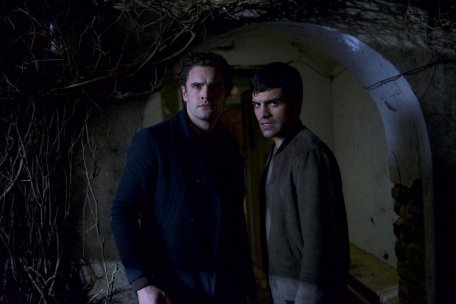 B&B is a real film of two halves, up until the half way point this is pretty much a black comedy. Marc is the trouble maker, it was his idea to go to the B&B, seemingly to cause trouble for the owner. Fred meanwhile is more of a peacemaker, not wanting to cause trouble. This duo reminded me a lot of the two from Withnail & I (coincidentally McGann is perhaps best known for his role in that cult film). Other than the fact they are a couple, and not alcoholics they resemble them very much. Around half way through the tone shifts to something far more dramatic and serious. I can't really give away the plot twist but it turns into the sort of movie where you find yourself questioning just what you would do in a similar situation. An event happens and the plot turns into dealing with this specific occurrence, with the cast all forced to put aside their differences to try and work together.

While B&B really did become quite thrilling I didn't feel the different types of horror fitted together well, there was a clear cut that was a bit jarring to me and took me out the experience slightly. I enjoyed the comedy goings on, and I enjoyed the tenseness and repercussions of the later part but there wasn't a smooth bridge between the two. With just five (credited) characters in the film it is a good job that they all do great jobs, especially McGann and Teale. Religious Josh would be an easy role to play as a bad guy, yet McGann brings a multi-sided approach. The characters views may be outdated and silly, yet put that aside and he isn't actually that bad of a person, and is certainly a loving father. The scenes where his homophobic actions have been forgotten and he is interacting with the gay couple as humans are maybe some of the best in B&B. The first part teases a horror aspect, the investigation into just who the huge, scarred Russian is, and his intentions at being coincidentally at the same place was quite entertaining. The action when it happens is very brief, with that plot thread being nearly (but not quite) a red herring to the more realistic moment of horror that then occurs. 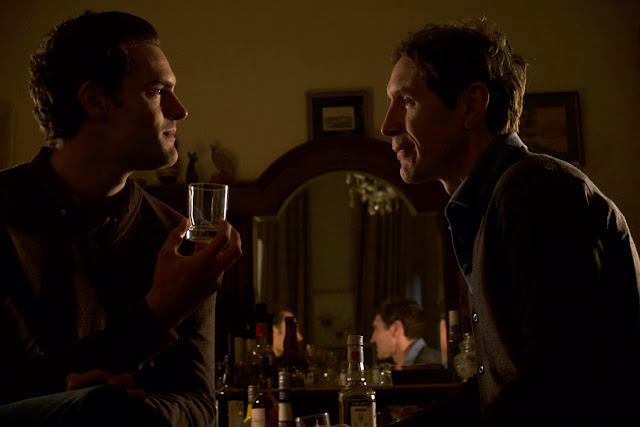 What is constantly good throughout is the films soundtrack, it never faltered from the introduction sequence to the very end, the music flowed together well and was fitting for whatever was occurring on screen. There was some decent directing here too, there were some great night shots of figures being silhouetted in darkness, and night vision played a part at some points. The weird look of the negative images shown added an air of mystery. The plot itself was pretty interesting, there were a few twists that I didn't expect, even if some of the reveals were more obvious, and if you look too deep there are some plot holes. While the whole concept of homosexuality was explored a lot, mainly with conversations between Josh and the couple, as well as with Josh's son Paul (Callum Woodhouse). It felt slightly preachy at times, but I put that more down to it seeming like being gay was a part of Marc's identity, like it was his mission to put that fact out there whenever he got an opportunity (mainly to make Josh uncomfortable).

I think if B&B had fitted together better then I would have enjoyed it more. As it was I found it to be an interesting film, and an entertaining one, it helped that there was no bad acting. Towards the end I did start to get slightly bored, there were one too many scenes of near silence with just shots of characters walking around being broody. Check out the trailer below, but beware it gets a bit spoiler filled in places.