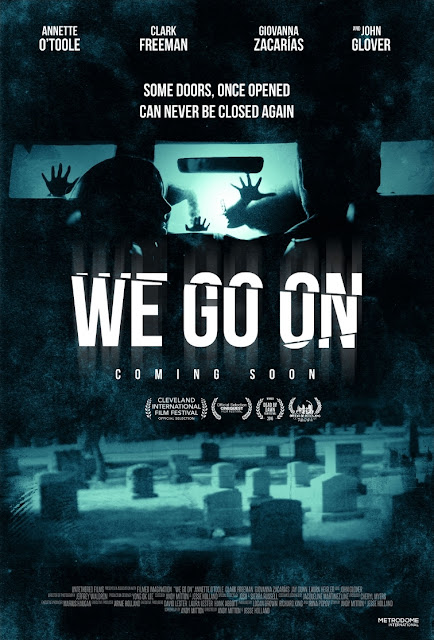 Currently my inbox is flooded with requests to watch films, and so I have been slightly neglecting actually watching films of my own volition. After being nagged at by a friend on the issue of making sure I make time to watch new horrors (that are eligible for the Fright Meter Awards of which I am a committee member of) I decided today would be the day I headed out on my own, and watch something of my choosing. As We Go On was on Shudder, and a contender for the 2017 awards I chose that movie, and I am kind of glad I did.

Clark Freeman stars as Miles; a man who has lived his life scared of everything due to his fear of dying, a fear that he gained after the tragic death of his father when he was a child. One day Miles decides to face his fear head on, he places an ad in the local paper offering $30,000 for anyone who can prove to him without a doubt that an afterlife exists. Of the hundreds of replies he receives he whittles down the list to just a handful of plausible people, and along with his sceptical mother Charlotte (Annette O'Toole) heads out to meet them to see if they can give him the proof he desires. However after discovering the answer he seeks he soon begins to wish he hadn't... 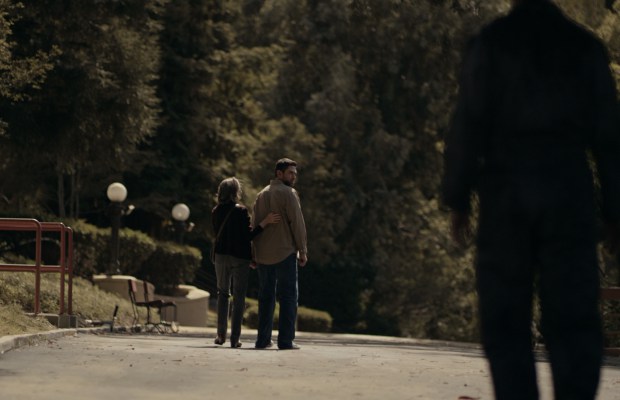 We Go On is an interesting film in that it straddles a fine line between horror and drama. Initially this seemed like it was going to be almost an anthology of sorts, I thought that each person Miles met with would provide their own little horror episode. It starts off interestingly enough with him meeting Dr Ellison (John Glover). This begins a creepy back story about a child who died in Miles's school when he was young. This is somewhat of a false start though and soon the tone changes slightly to something more familiar. There came to be a strong vibe of The Sixth Sense about this, and at times this worked against the film as I guessed story beats before they happened. Like The Sixth Sense this is less concerned with scaring you, and more at making you think more deeply about just what happens to people after they die. The ghosts that show up here are relatively harmless, though no less shocking for Miles.

Even with the personal horror for our main character there is a soft edge, whenever something truly terrible happens there is always a silver lining, a ray of hope which is nice for sure, but at times I wished rather selfishly that the bad events would continue rather than be given little time to really soak in. This goes up to and includes the ending, though it is somewhat ambiguous and could be interpreted quite a few ways. Of special note here is the acting of every single cast member, both main and secondary. I was constantly impressed with everyone giving fantastic performances. O'Toole is brilliant as the mother character, she has such an interesting relationship with her son, yet is strong willed and independent enough in her actions to stand out from the usual motherly portrayal. Freeman is also a good choice, playing a man who is literally scared of everything meant that a lot of emotion was needed, and he delivers it, even if he is over shadowed by the people he interacts with. I loved Glover as the Dr character, and I also loved Giovanna Zacarias who played Josephina; a spirit medium, both stole the scenes they were a part of. 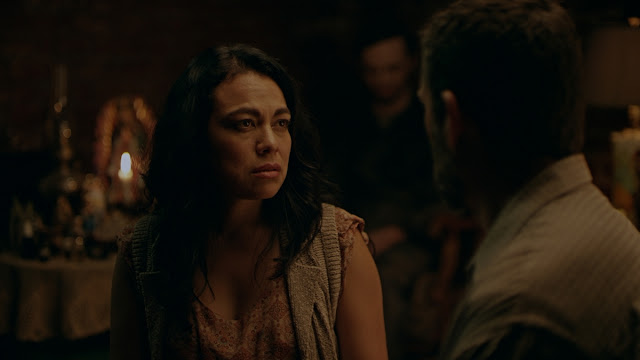 While I did enjoy the tone of the film, with hope being a key theme I did at times wish there had been more horror than just the occasional angry ghost screaming or charging at Miles. They kind of lost their impact after a while and with the story beats only ever teasing at the possibility of genuine chills I sometimes felt a little disappointed, only ever slightly but the feeling still popped up now and again. There isn't much special effects to speak of, more some interesting camera work and editing of inserted images and angle changes to suggest weirdness. I did enjoy how low key the film was, it was mellow and quiet with plenty of scenes that should drag, yet strangely don't. For me the sub-plot involving Miles's Dad didn't feel as developed as it should have been, either that or the occasional flash backs lost me a bit.

We Go On turned out to be a completely different type of horror than I expected, I thought it would be like Jacob's Ladder, but as I already said it turned out to be something far more calm and introverted. With great directing by Jesse Holland (YellowBrickRoad), and Andy Mitton (also YellowBrickRoad) as well as some great actors this is well worth your time.