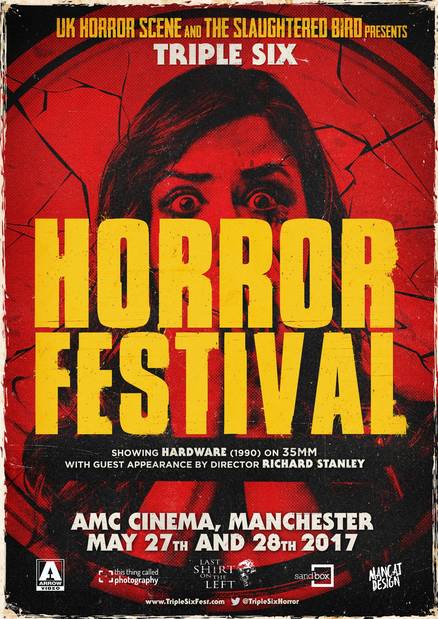 So back in December last year I mentioned the Manchester based Triple Six Horror Film Festival that was due to happen in 2017, well I have some further information on that as the full line up has now been announced and tickets are now on sale. So to save on time (and to be lazy) here is what the press release says of the event:
'The line-up includes nine feature films and 12 short films. Highlights include the 1990 horror sci-fi classic Hardware screening in 35mm with director Richard Stanley in attendance for a live Q&A  following the screening. Also there is a world premiere for UK horror mockumentary Tone Death plus premieres for Quarries, The Forest of Lost Souls, Hounds of Love, Offensive and Roddy Piper's last film The Chair. Plus exclusive screenings with Cruel Summer and The Unkindness of Ravens.'
Weekend tickets cost £30 and can be brought here, sounds like there are going to be some cool films showing so if your in the area be sure to check it out!

The guys at Artsploitation Films have picked up the US rights to controversial abortion-themed horror Red Christmas. The film stars horror legend Dee Wallace (The Hills Have Eyes, The Howling, Halloween, Critters) who also co-produced. She plays the mother of a dysfunctional family living in the Australian outback who on Christmas eve are visited by Cletus; a mysterious deformed man, this man brings with him terror and violence. The film is said to bring together comedy, outlandish gore, and of course the topic of abortion. Red Christmas is getting a limited theatrical run in August and is due to be released on DVD/Blu-ray and VOD in October. Check out the trailer below... 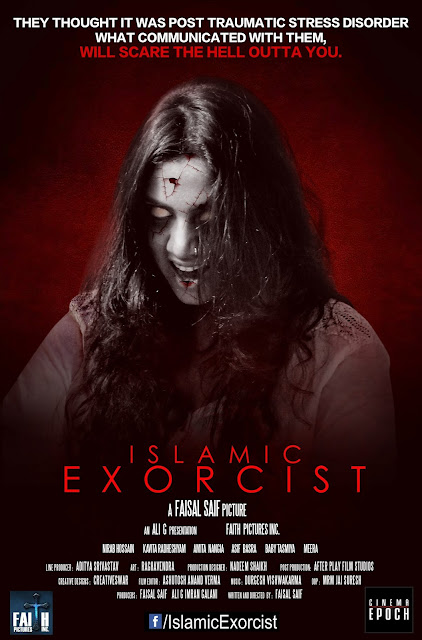 Indian international horror film Islamic Exorcist has had the reveal of it's movie poster. The film made by controversial Indian film maker Faisal Saif is in English, and is to star Kavita Radheshyam, and apparently it is based on a true event. The film has been picked up by Cinema Epoch and is due to be released later this year.

Finally comes the new trailer for Red Eye; no not a remake of the 2005 Cillian Murphy film, but an entirely new film. I must have contributed to an Indiegogo campaign for the film at some point in the past as I'm always getting updates on its progress, yet have no idea what the film is about. They have released an official trailer which I shall watch now...wow, it has Jessica Cameron and Heather Dorff in it, after seeing them in bloody torture film Truth or Dare that makes me look more forward to this. It seems a bunch of teens head out to remote woodland to explore the legend of 'Red Eye' for a film project, but when out there they discover too late the legend is real. The film is getting it's world premiere on May 27th at the Gateway Film Center in Columbus Ohio. Check out the trailer for yourself below...