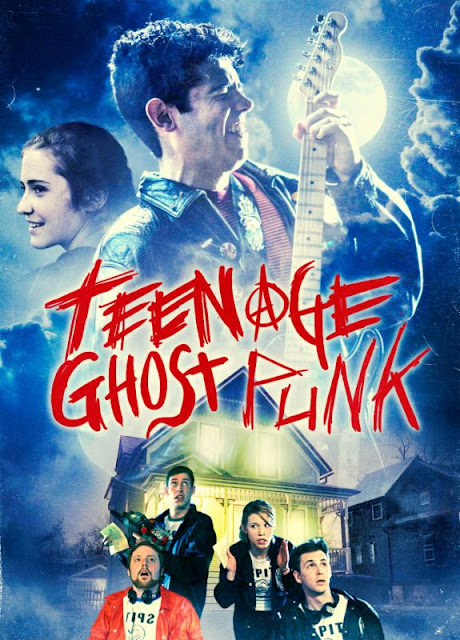 I had a very long day at work in my day job and so I really didn't feel like sitting down to watch a film for review. However my list is long and so I decided to see Teenage Ghost Punk (written and directed by Mike Cramer), and boy am I glad I did. This is a feel good movie in every sense of the word, for the entire hour and a half run time I was sat with the biggest grin on my face, it really cheered up my day.

Teenage Amanda (Grace Madigan), her young brother Adam (Noah Kitsos), and their recently divorced mum Carol (Adria Dawn) move to a new town to have a new start. After a series of strange events Amanda starts to suspect their new home is haunted, and it turns out it is. Brian (Jack Cramer); a ghost of a teenage punk who died in the 1980's haunts the building and soon him and Amanda start to hit it off, but with ghost hunters and a spirit medium in the area is this new love doomed to fail? 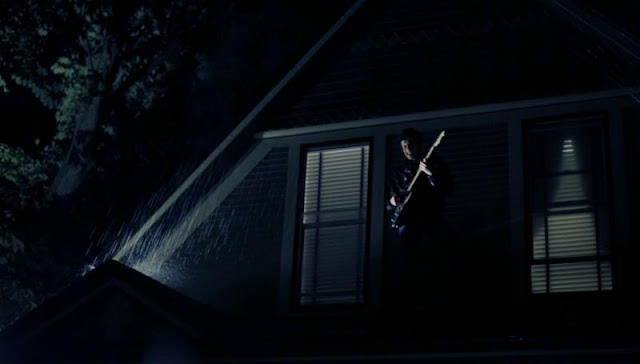 Ok, so first things first, this is not a horror film in the slightest despite dealing with the paranormal. In fact it is billed as a family friendly comedy and in that respect it is spot on. There is no swearing, no scenes of sex or violence, even the ghosts that feature are all nice people. What this does do is maintain a pure feel good vibe with some at times actually affecting scenes alongside a cool punk rock soundtrack. It is refreshing to see a movie where there are no bad parts, despite Adam and Amanda starting at a new school they are not alienated or bullied, they make friends easily despite both being outsiders. Adam has the mannerisms of an upper class man, speaking in long flowery language that should irritate, but instead I found really funny. Amanda on the other hand should come across as a weirdo with all her talk of spirits, yet her new friends all take it in their strides. Of the ghosts again there is none that are evil in the usual horror sense, they are all polite and friendly with even the mythical Vlad the Bad turning out to be perfectly nice as well. There are just no bad characters here at all, some of the acting may be a bit silly but it fits the family friendly tone well. The closest we get to antagonists are the ghost hunters S.P.I.T (Super Paranormal Investigation Team) who are so wonderfully awkward in their actions that they were laugh out loud, their threat level hovering somewhere around 0.

The special effects for the ghosts are near none existent, occasionally Brian will fade into nothing but other than that they disappear when the camera is off of them, or move objects every so slightly. All the ghosts look and act physical with no make-up effects on them, the only difference being they wear clothes relative to the time period in which they died. You have for example hippy Suzy-Q from the 70's, as well as a rocker from the 50's and others from different times. The ghosts are physical and are even able to eat and drink real food. Without horror the theme here is often about moving on with life, and not living with regrets. Carol carries around with her the photo of a boy she met one summer as a teen...in the 1980's, Amanda is initially caught up with her boyfriend she had to move away from, and the ghosts (known as haunters) are doomed in a way to forever exist in a world that is constantly changing and evolving without them. There is one poignant scene where Carol is sat (to her appearance) alone at night drinking speaking aloud her worries, with Brian answering her concerns but unable to be heard which I found kinda moving. Also on the subject of music the soundtrack is really good, and there was actually some good advice about how to listen to music. Sometimes rather than just picking your favourite songs to download you really should make time to listen to an album all the way through as it was meant to be heard. 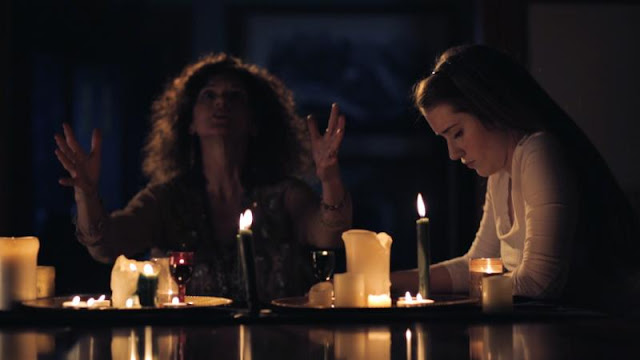 The plot is pretty simple and it sets up events that have little impact or don't even occur. There is a sub plot with Carol and her work colleague constantly sexually harassing people that doesn't really go anywhere, meanwhile the story is all gearing up towards prom night; a night that doesn't even take place in the scope of Teenage Ghost Punk. What I did enjoy where the flashbacks and flash-forwards that occur. The flashbacks help to give insight into past events the ghosts have witnessed, while the film ends on a nifty '14 months later' epilogue. If your after horror of any sort then you will be very disappointed with this, however if you want something that is going to cheer you up and make you laugh then look no further. Teenage Ghost Punk is now available to rent or own on a variety of North American Digital HD and Cable VOD and MOD services including iTunes, Amazon Instant, X-Box and Google Play, check out the trailer below...