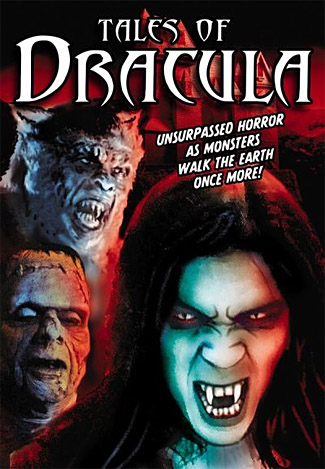 Obviously one look at the title of Tales of Dracula would tell you this is a vampire film, and one based on Bram Stoker's original blood sucker at that. The most interesting thing about this is that it is filmed in tribute to the classic Universal Studios horror films of the first half of the 20th century, most notably 1931's Dracula in which Bela Lugosi gave what many believe to be his best performance as the titular vampire. Due to being a homage this is filmed in black and white, and is even set out in the same style.

Set up as a sequel to Universal's Dracula this has the count (Wayne W. Johnson from Night of Something Strange and Brackish) fleeing England and heading back to his castle in Transylvania after his defeat at the hands of Von Helsing. Meanwhile in a village nearby to the castle arrives a man named Creighton Reed (Tom Delillo) who is looking to go to the estate of Victor Frankenstein to look for a cure to a dark secret he holds within him. Meanwhile Victor himself is away on a mission of his own, in his stead is his grand daughter; Victoria (Courtney Bennett) who is looking after Frankenstein's monster (Joe DeMuro who also co-wrote and directed this) and sees an opportunity to make him stronger by injecting him with the blood of Dracula, something which the Lord of Darkness is none too happy to discover... 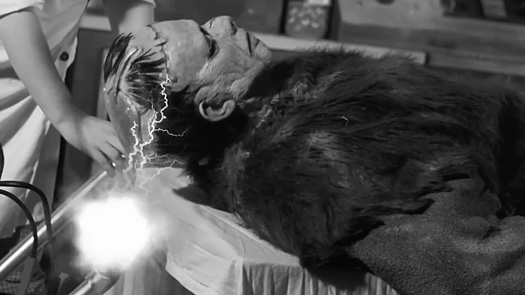 Being filmed in a close approximation of the style of the classic Universal films made for an interesting premise. I actually did love the fact that this was a direct sequel to Dracula, while the set up for a fight between him, the Monster, and the wolfman was something I was looking forward to. Being inspired means that this follows much of the pacing of the old films, there are long moments of silence with the music playing setting the mood, characters seem more expressful ,while there are lots of talks about the events playing out. This also led to problems inherent with recreating films that are getting close to a hundred years old. While they deserve the moniker 'classics' they are not exactly the most interesting to watch in modern day even if they can be appreciated. Viewers brought up on a diet of high action horrors may find that Tales of Dracula can be a bit dull at times. Much of the feature involves various village folk talking at each other, with the monsters relegated to only appearing sparsely, in total I would say combined we get around maybe fifteen minutes of them in a 97 minute film. This was the same way for the old films and so you can see why it was decided to do it this way, due to their brief appearances these monsters needed to stand out.

First off Dracula then. Now Johnson has the perfect theatrical voice for this classic villain and he bases his version of course on Lugosi's portrayal. His voice is indeed great for this role, I was most reminded of the Dracula from the Castlevania video games, there is class and superiority behind his mannerisms. There are some iconic moves he pulls as the count, my favourite being the cape pulled up close covering most of his body so just his eyes peer out. The make-up for him (and the bride of Dracula) looks really good and mixes with the black and white footage amazingly. This vampire can turn into a bat and phase in an out of existence at will, the bat sequences were represented by CGI that while not terrible looking did come across as basic, the movie did have just a budget of $20,000 and so it actually isn't bad in context, it has some charm to it. The wolfman barely features at all (in his wolf form) but we do get a nice transformation sequence, while Frankenstein's Monster has a traditional Boris Karloff look to him, but again doesn't get to do much. Of the actors playing the humans I was most interested with Bennett's version of a mad doctor, it was refreshing to have a female be swapped in for Victor, she had a good does of coldness that made her stand out. For me the character of Daniel (who has quite a large role) felt a little bit miscast as he never come across as the grieving father he was meant to be and so distracted a bit. 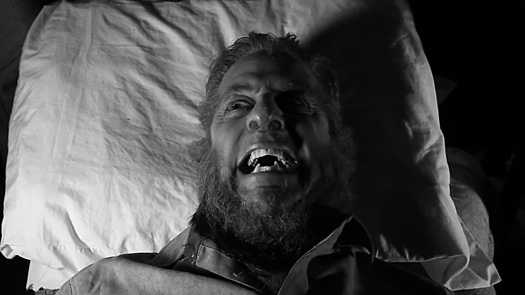 It seems wrong to criticise a film set as a homage to an old film for sticking rigidly to the format of that film. It feels authentic with the same mood that Dracula evoked, yet it also as a result has the same pacing issues. For me it was the plot that let this down with an ending that seemed rushed with the end credits popping up at what felt like the mid point of Tales of Dracula's story, and with many plot threads left dangling. It looks like there were plans for a sequel to this, if that happens I'm sure these threads will all be tied up. In terms of the portrayal of the monsters this succeeded with each of the three giving entertaining performances, my only complaint being I wished there had been far more screen time for them, and more of them interacting with each other. At times with all the classic monsters in one place this almost felt like the horror version of The Avengers.

If you go into this looking for a recreation of the old classic you will not be disappointed, the black and white in particular makes this often look pretty stunning with great use of light and shadow giving a great hit of nostalgia. For the budget used this really isn't a bad film, I did enjoy it, but was just a bit slow for me.