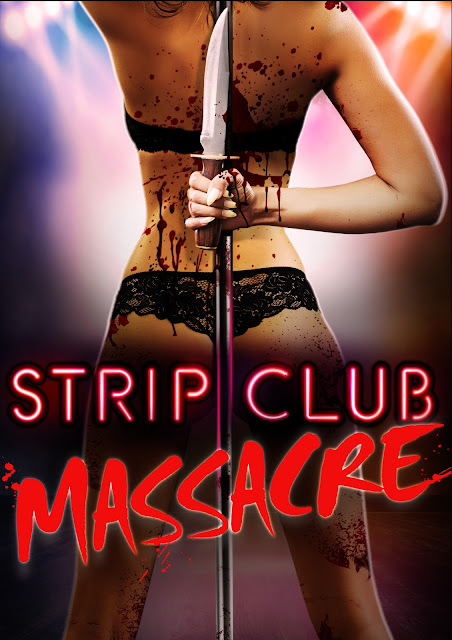 You can pretty much tell exactly what type of film Strip Club Massacre is going to be from it's title alone; Shakespeare this is not. Instead we have an indie exploitation horror that doesn't take itself too seriously, but which does suffer from some occasional pacing problems.

After having the worst day of her life in which she gets fired from her job, evicted from her house, and finds her boyfriend cheating on her with her house mate, Megan (Alicia Watson) travels across country to stay at her best friend's house. Desperate for money she accepts a job offer from her friends boyfriend Bobby (Stefan Rollins) to work as a waitress in a local strip club, but sick with the abuse from the strippers she decides she wants to become one of them. However unknown to her three of the strippers are quite murderous and randomly kill clients and colleagues alike, and soon Megan finds herself on their hit list... 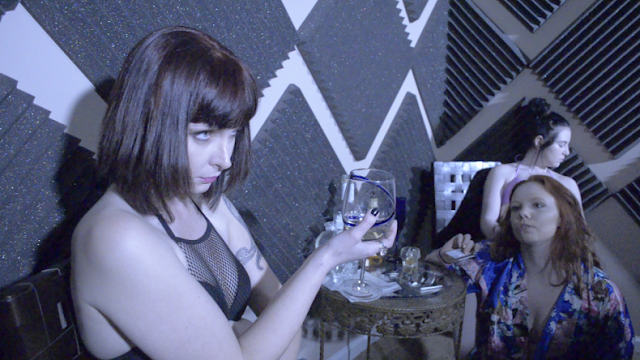 It is a good thing that Strip Club Massacre doesn't take itself too seriously as otherwise it would have completely unravelled. I had to tell myself that this film exists in an alternate reality where there are no police, as it is ridiculous that the psychotic strippers would be able to get away with not only killing people, but also the laughable efforts they go to, to conceal their crimes (for instance cutting out the teeth of one of their victims to make the body harder to identify, but then leaving the finger print covered knife they had used right next to the body). For a lot of the 100 minute run time this plays out more like a drama with little scenes of horror thrown in every now and again. The killings exist in their own story line with Megan pretty much clueless, much of the film is her slowly getting more involved with the goings on of the sleazy club. Bad stuff happens to her constantly, from everyone hurling insults at her from friend and foe alike, to people mistaking her for a hooker, and to more serious stuff. She just seems to take it in her stride though with her breaking point being even more of an abrupt turning point than the girls in Even Lambs Have Teeth.

The low budget is ever present but usually crowd scenes are covered up with close up angles and people all stood together to give the illusion of masses. This sparseness works in the context of a sleazy strip club populated by regulars, and when it comes to the special effects it actually works better due to the silly, yet entertaining scenes of violence. As well as eye gouging you get a penis sliced off with a knife (seems to be so in vogue lately), and a poor guy who gets penetrated with a crowbar repeatedly in a place that is not so pleasant! This is all spread out over most the film with the final 25 minutes where the actual plot picks up giving motivations to our heroine for the titular strip club massacre. It is kind of amusing how Megan doesn't actually ever find out her colleagues are murderous psychos and that it is just happy coincidence they happen to be, yet on top of this she also gets retribution on plenty of less deserving folk. I guess you could put it down to her mind snapping but she hardly seems the victim, more that she was waiting for a reason to go postal. While it is fun to watch her you could also argue that by doing what she does she is no better than the film's antagonists, at least the female ones. 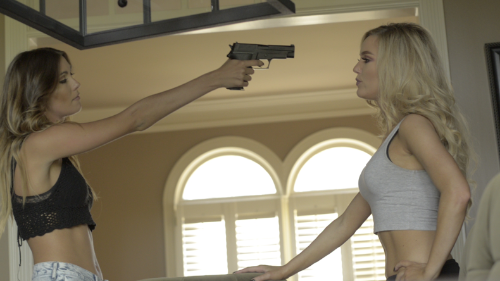 Being an indie I expected some bad acting, but mostly it is adequate. I found the leader of the killer trio; Jazz (Erin Brown) to be an entertaining bad person, while the corrupt owner of the club (Mark Law) was also quite interesting, and probably the best actor. In fact pretty all the bad guys do decent jobs. The rest of the cast were ok, but none stood out as anything special. The plot finally picked up at the end, but up to that point there wasn't really enough going on outside of the killings, though to it's credit this is never dull. The sub-plot about Megan finding out details about her estranged mother didn't really add anything, while Megan aside there was no character development. Near everyone is just so mean spirited here, if it wasn't for the fact Megan barely ever seemed upset by this it would have left more of a nasty taste. As it is she fitted into this world just as well as anyone else.

If your going to watch a film called Strip Club Massacre your expectations are probably not sky high. With scantily clad females, stupid, yet fun (and unique) deaths, as well as a tongue in cheek attitude there is trashy enjoyment to be found here for sure. Strip Club Massacre comes out on a variety of Digital services courtesy of Midnight Releasing and Brain Damage Films on 2nd May including Amazon, iTunes, Vimeo and YouTube, it is also available to own on DVD exclusively on Amazon MOD. Check out the trailer below and see what you think...