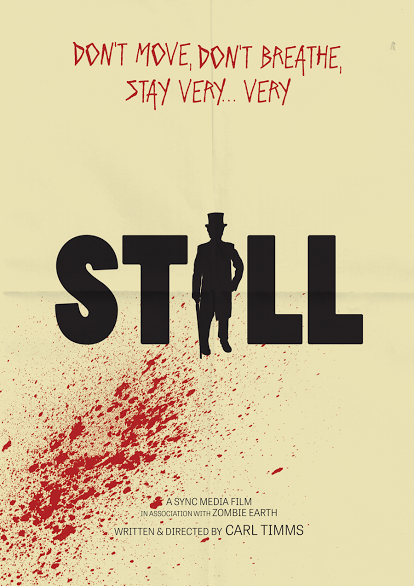 The idea behind award winning English short zombie film Still (written, produced, and directed by Carl Timms in his debut as director) sounded so unique and interesting that even before watching it I had a strong feeling it would be good. Thankfully it was good, it takes a very simple idea and runs...well, limps with it. I have a fondness with shorts as there is so much more scope for them to be enjoyable than feature length films.

Still stars Joe Capella as a gold painted living statue street performer who finds himself in the midst of an unfolding zombie outbreak. Luckily for him the undead haven't realised he is a human and not actually a statue, but on the flip side he can only hold his breath, and be still for so long before needing to move...

I loved the idea behind this, and I love that the film starts mid story with people being eaten left, right and centre as the statue looks on, unable to react at all. A lot of the seven minute short is from his perspective with his thoughts being spoken aloud, such as thinking about his leg cramping up, having an itchy nose, and needing to breath. This makes for some funny moments that made me laugh out loud on occasion, especially with the plights of the other street performers (a black and white flashback to a clowns last stand, and the painfully slow attempted exodus of the statue's rival 'wheel barrow man'). This is all helped by the voice of the statue who just has the perfect panicked, whiny sound for the role, and by the physical acting of having to be stood stock still without blinking or breathing. 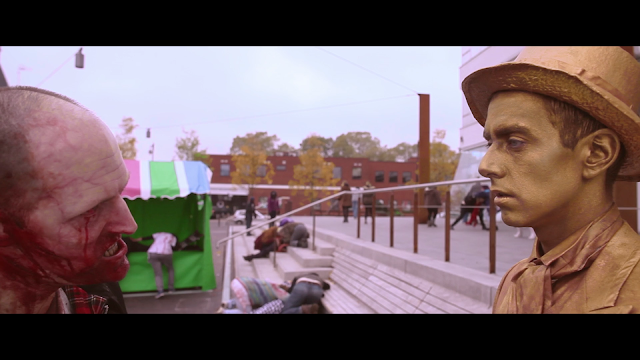 With the run time being under ten minutes this is a perfect length, there is no filler, while the story as it is stays enjoyable and silly throughout. The camera work is good also, focusing a lot on close ups of faces, both living and dead, with camera pans, and edited in images of what they are looking at combining to give a concise and easy to follow tale. The zombie effects are not bad at all with plenty of pale faces, pronounced veins and lots of blood. It's consistent with the many, many zombies having a unified look to them. On that note the make up effects were done by Stuart Conran who was the head make-up artist on Shaun of the Dead! There are some special effects such as intestines and a severed head that add to the chaos of the main street attack scene (filmed in Birmingham).

With such a novel idea I'm glad Still met my expectations, it was a fun and enjoyable piece of solid film making with a perfect cast. If you want to check it out for yourself then head to Vimeo where it can be rented for the low price of £1.59.