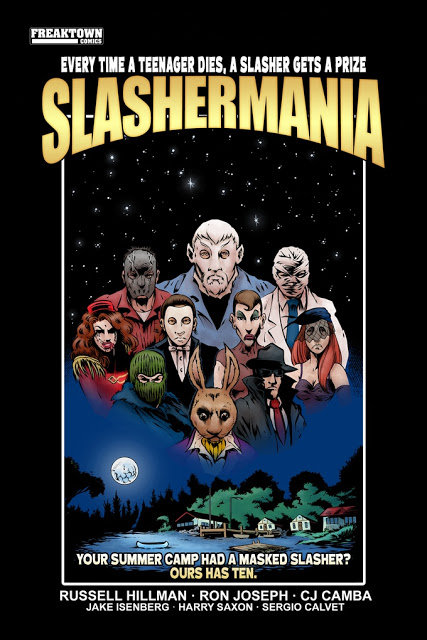 Back in August of last year I was provided with a rough copy of Slashermania, one that contained about two thirds of the overall graphic novel. I put up a blog post at the time talking about my thoughts on what I had read, and now I have had the chance to read the whole thing. At the time there was a Kickstarter to get funds to print and distribute the comic, I actually ended up donating some money to that as I enjoyed what I had read, reminding me both of Battle Royale and Slashers. As a result though I don't feel comfortable doing a traditional review as technically I contributed towards it's completion, and so I won't be putting up a score at the end of this, nor shall this be too detailed as I said quite a lot last year about it.

So I summed up the story in my news post about Slashermania, but to recap...A group of fifty teenagers are taken to a remote camping ground where they are told they are to be trained as camp counsellors, in reality however they are going to be the unwilling victims of Slashermania. This yearly event sees a number of serial killers tasked with murdering as many teens as possible with awards giving in a number of categories such as 'Best Male Kill'. As they do so they are watched by an audience of super rich people who pay highly for a ticket to watch the event. 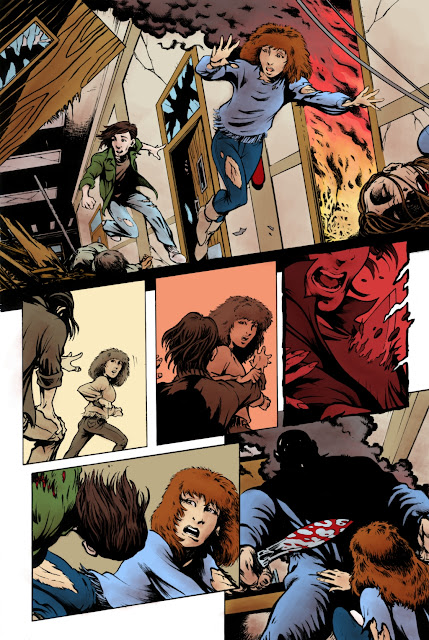 I won't go into too much detail as I talked quite a bit about the format of the novel, and the serial killers themselves before. Most of the action takes place at the camp ground with all sorts of violent deaths occurring. These deaths can be quite inventive with an obvious love of horror films being an inspiration. So for example there is a Giallo styled killer who kills his victims with a razor, and a lumbering brute wearing a boiler suit and wielding a chainsaw. There is plenty of blood and guts though towards the end people start becoming killed in droves rather in isolation. Some quite inventive stuff here, my favourite being what happens to two poor victims in a swimming pool, looked pretty grim even if you did only see the after math of the sickness!

The killers were quite interesting though there was no real development to them, and I felt that later on they become almost a voiceless mass rather than seeming like individuals. I was surprised to see it was the teens who become more interesting as the story progressed. Starting off there was nothing really to anyone, everyone just perfect stereotypes of sexed up teens just wanting to get drunk. There was a nice mix of gay and straight characters and a decent balance between people who had no problem with them and more aggressive ones who did. Of course being an ode to classic slasher films there was a final girl, and I really enjoyed her story line. The plot in general is nothing amazing, but it works in the concept of being a deadly game show, it didn't need to try hard to be entertaining. I liked where the story went, but as I said, it did seem the killers lost their threat level very rapidly, even if other characters become pretty entertaining. 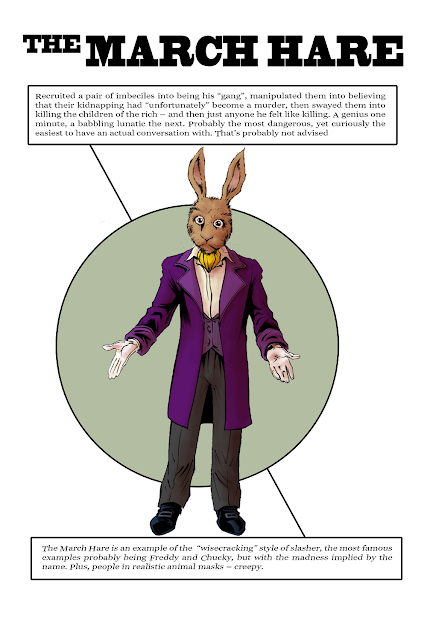 In addition to a selection of art work at the start that details the ideas behind the slashers there was a cool bit after the comic that had fake movie posters for the psychos, with a range of different art styles used. The art in general for the book itself does a good job of showing clearly what is going on. Characters are less exaggerated in their look than what I remember, but they have a lot of movement to them. I like Slashermania, and it is something I am glad I backed (and patiently looking forward to receiving my physical copy of the graphic novel!). It has a great idea behind it, something that I have yet to find dull whatever the form it takes. There is a lot here for fans of classic horror to enjoy.
Posted by Daniel Simmonds at 11:23