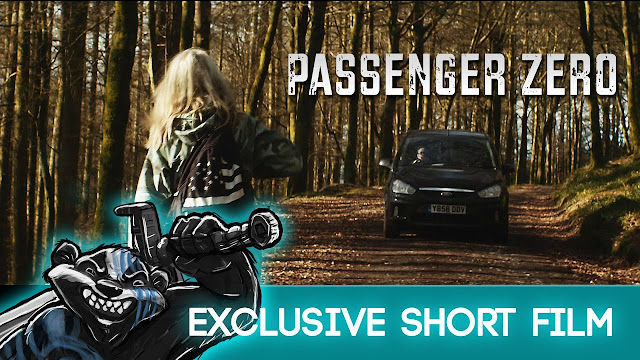 Passenger Zero is a 17 minute short Irish zombie film written and directed by Brian O Regan in his debut short for Celtic Badger Media. As the short is freely available to watch on YouTube I will include it after my review, be sure to check it out as it is of high quality in a lot of places.

Paddy Murphy stars as Aiden; a man who picks up young wandering hitchhiker Eleanor (Audrice Styles) while driving through a forest. Having ran away from home and been in the woods for several days it is up to Aiden to break the news that a zombie apocalypse has swept the country, something that Eleanor finds hard to accept until she is face to face with the undeniable proof...

Truth be told I wasn't expecting too much from this, I had a feeling I would enjoy it as I paradoxically often have a lot of time for shorts, but I expected some bad acting/and or bad special effects. Both the main actors are great in their roles, especially Murphy who scene steals with his portrayal of a man in grief. There is a believability to the emotion he brings to the role, especially during the flashback sequences of him trying to come to terms with having been forced to kill his partner. Styles fits her role well also, but due to her quieter voice I often struggled to understand what she was saying. This wasn't due to her acting, it was more that the music playing over the short was louder than the dialogue which was especially apparent whenever she spoke. The music itself is mournful and adds to the feeling of loss that Passenger Zero creates.

There are a few zombies here and they all look the part, they have more of a realistic look to them rather than being covered in random make-up (don't get me wrong, I love that cheap looking style of undead too!). The sequences featuring them are fast paced with some nice editing, in general there is good directing here. I enjoyed the flashback sequences as they complimented the talking of the car scenes, but in terms of plot this isn't too original, such as the obvious ramifications for the character with an injured hand, I did still enjoy it though, again due to the decent acting, and the cohesive sense of place that is crafted here. Check it out for yourself below, it's worth a watch.

On what planet does this reviewer think this is a good short film. The acting is armature, untrained and just plane awful. Non of this cast can act. The sound edit is so bad you can hear the audio track popping in and out. As for the Camera work , there are two good shots. The opening shot (but with no close up of the girl) Where is the fucking close up, this is film school one -o - one.. and when the girl runs down the slope to hide from an oncoming car. And thats only down to the fact that the day light was just right. Shooting anything on a RED and not using proper lighting is a crime against film making. Then you have a 3 min scene in the car and we can't see the actors faces. The whole fucking thing is shot from the back seat..FFS.. Maybe just as well. From here it just gose from bad to worse... The scene where the guy gets bitten,,, He puts his arm into the guy mouth for him to bite him lol. Try writing a honest review or learn a bit more about film making. You clearly do not understand what a good film is.

So your basically saying the review is dishonest because it doesn't meet your views? That is a bit of a strange way to approach life if you expect the truth to be only what you believe in. Everything is subjective, I watched the film, I enjoyed it despite it's faults, such as the sound mix which I did mention.
Thanks for the feedback, it is genuinely appreciated, but try writing an honest reply, or learn a bit more about using spell check. You clearly do not understand what a correct spelling is.

So your offended by my comment, or you see it as a personal attack at your review.
And you reply by attacking me over a spell check..

Having looked at your site.. Spell check is something you should look into..

Yeah, can't argue with that, pre 2010 are wild lands, just never have time to go back and sort those out!