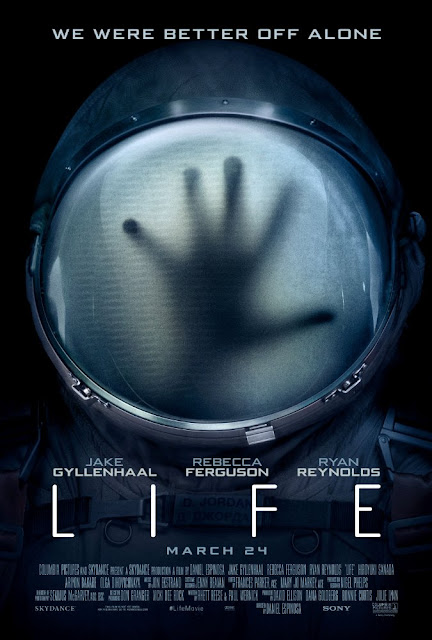 People have been saying that Life is the best Sci-Fi horror since Aliens and after watching it I would agree, not that there have been too many of note over the years. The original Alien has been stated to be a direct influence on this and it really shows with the plot being in a way almost identical in a broad sense, though stuck into a modern setting rather than the far flung future. Of course this can't be said to be a better film than Alien, personally I have never rated that one too much, though it has been decades since I last checked it out.

A team of scientists are aboard the International Space Station awaiting the return of a probe which had headed to Mars to collect soil samples. When they start analysing the findings they are shocked to discover a dormant alien life form. This life form is so small it is invisible to the naked eye, yet a huge deal is made back on Earth with the being lovingly named 'Calvin'. After managing to reanimate this creature it quickly begins to grow in size until soon it has little tentacles. However an accident occurs which results in one of the scientists getting attacked and the creature escaping from the lab it was contained in. With the creature continuing to grow and getting more intelligent the crew are faced with the task of killing it, however Calvin is seemingly indestructible, and is determined to kill everyone on the I.S.S and escape to Earth where it will be unstoppable... 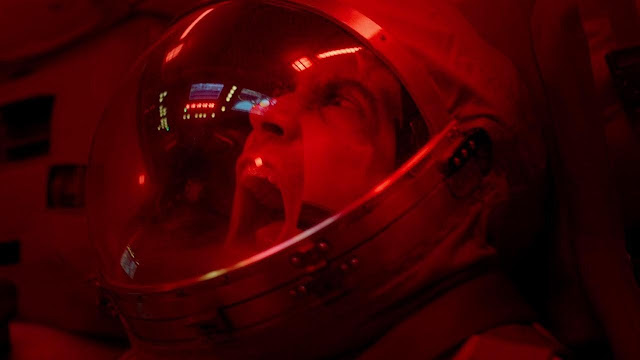 It was impressive how entertaining Life was, the whole film takes place in the cramped confines of the station and the plot mostly revolves around the crew trying to kill or contain the space octopus like creature. In a way I was reminded of the video game Dead Space with all the bad things that keep occurring to the poor people trapped on board. On the one hand the location did get slightly samey as the film progressed, yet on the flip side the fact that these people are trapped in such a small space with a murderous alien (that due to it's octopus like body is able to squeeze through the smallest gaps) makes for a pretty scary film, after all it's not like they can just go outside to escape it, they are totally and utterly trapped with something which wants them to be very dead.

Over the decades there have been some classic horror film endings such as The Wickerman, Halloween, Carrie etc, and to that list I would add Life. The ending was pure perfection, the directing was amazing, the editing was amazing, the music was amazing, it all combined for an unforgettable end that reduced me to staring in disbelief, literal tears of fear streaming down my face! That ending blew me away and I would almost say it was worth watching for that alone, certainly in my top 10 horror film endings. So of the creature itself; as I said Calvin (I love how even by the final act the scientists are still referring to this evil alien as 'Calvin') resembles a space octopus, slightly translucent and with very strong tentacles which it uses to climb around the station, and to wrap around it's victims. It never really gets much bigger than a small dog and so there is no contrast with Alien in that regards, there is no man in a rubber monster suit walking around. Also the whole film takes place in zero gravity which I don't think I have ever seen when it comes to horror. 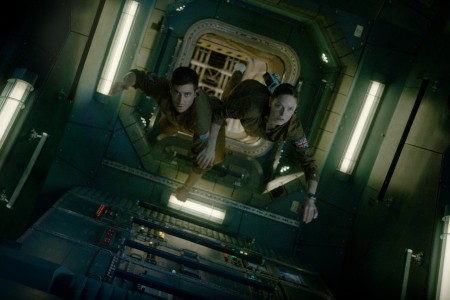 The cast do a good job, for me there was no character who really stood out but there also no duds. Ryan Reynolds isn't bad, Ariyon Bakare was decent, Rebecca Ferguson was believable too. These characters are all meant to be relate-able people though rather than heroic types. The main character is David Jordan who was played by Jake Gyllenhaal, now is it just me or does he increasingly look like Steve Carell as he gets older? To my shame I spent the entire film thinking it was Carell, I kept thinking how weird it was that the boss of the American version of The Office was up in space fighting an alien, did actually get a bit distracting! The trailer made Life look like it was going to be a straight Sci-Fi film, but this is straight up Sci-Fi horror. Sometimes you can see a film and it only really grasps at the external roots of the genre it is meant to be a part of, here though there is no doubting what this is. It follows the pattern of the crew slowly getting picked off one by one which leads to a variety of novel deaths. Being in zero gravity this leads to some great blood effects as it all floats out of people rather than the traditional flowing liquid. There was also a death by drowning in a spacesuit that was leaking coolant that was something I had never seen before. With everyone floating around the effects were pretty good, though I found at times stuff happening in the distance was hard to make out exactly what was going on.

I love films set in space anyway, that is the one place I would want to go over any other, and so I enjoy them in general, but the beautiful location mixed with horror is just perfect. Well it's not totally perfect due to slight boredom at times, characters making baffling decisions, and a weird vibe of the technology on the station meaning despite a modern day look this was actually set in the future, even if one not too many decades away. If your after a decent Sci-Fi horror then look no further than Life, and love that brilliant ending.