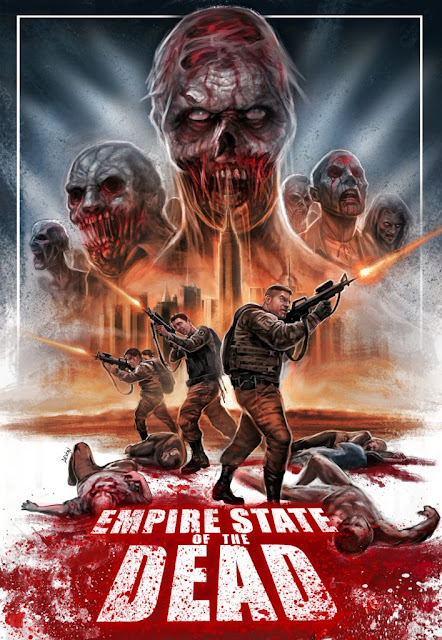 For someone who has the word 'zombie' in his blog's title I sure don't watch as many zombie films as I should do. So it was refreshing to have an excuse to watch one when I got sent the undead anthology film Empire State of the Dead. This movie is made up of eight short films featuring everyone's favourite rotting cadavers that all take place in New York State, and that were all directed by New York filmmakers.

The plot comes mainly from the wraparound segments (directed by Ron Bonk). In this story a zombie outbreak has occurred in New York. A local crime boss named Ray has used the opportunity of the chaos the outbreak has caused to try and consolidate his power over the region, mainly by battling the local military forces, and by sabotaging all the local civilian refugee centres. A small group of soldiers are tasked with travelling to these centres in order to bring any survivors back to military HQ. 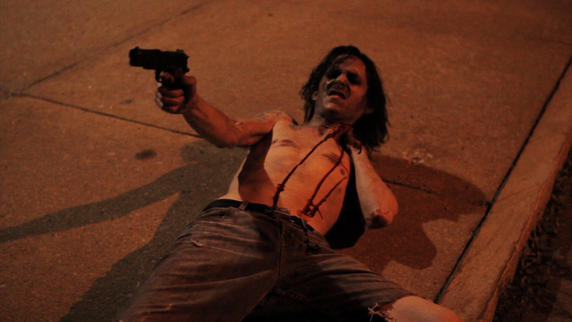 I usually have a lot of time for anthologies, but the last zombie anthology I watched (Zombieworld) was really quite awful, and so I had some trepidation about this one. Thankfully while this is quite rough at times, and not all the shorts are good it has more of a consistent quality to it, while the wraparound story keeps the thematic qualities intact enough that you could believe these all take place in the same location. Things start off on a bad footing with a gangster sequence that sets up the main human antagonist, but was a bit of a confusing start. It is after this with the first short Necropath (directed by Joshua Reale) that things pick up. This first film stars Moe Isaac as a psychotic drug addict who is prowling the streets with little regard to the undead all around him. There was great editing here, and Isaac has such a deranged look to him, with his acting being very unsettling. I loved his interactions with both the zombies and humans and he left an impression making him one of the more interesting characters to be found in the film. This is followed up with the comedic Zombie Hipsters From Upstate that follows a weed smoking zombie film fan who discovers the apocalypse is happening right outside his window. The problem with this short is that a character states and demonstrates head shots do not work on the undead, yet in every other part of the film that is not the case at all and just led to me being confused for a short while.

Now I'm not going to go into every short in detail, mainly because they are not named until the end credits, but there were a few other notable ones I will mention. Blessed Are the Meek stars Wayne.W Johnson (Night of Something Strange, Brackish) as a Clockwork Orange style mad man decked out in great looking skeletal face paint, who along with his gang kidnap a couple in order to hunt them in woodland. I was looking forward to seeing him in this (he was the one who sent me Empire State of the Dead in the first place) and he doesn't disappoint. He is as hammy and over the top as ever, but as always this works so well. The only complaint is that he is so good in his role that he over shadows every other actor in this short with the pure charisma and uniqueness his character displays. Revenant was another interesting short, this one is about a scientist trying to create a vaccine for the zombie virus, and had a real B-Movie feel to it, plus had some moments that reminded me of the video game Resident Evil 2 (which is never a bad thing). 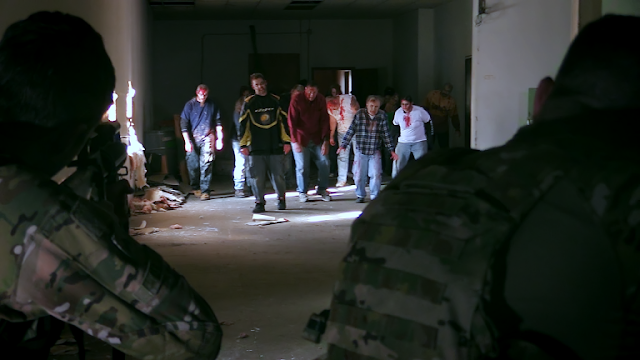 It is not all as entertaining as this though with a couple of shorts I did not really enjoy. One had two men walking through woodland before ending up at a weird house. I admit my attention was lost a bit here as I found it to be quite dull and uneventful. Similar was one set in a single room that had the novel idea of it all being shown from the perspective of a zombie. I couldn't fault the acting in this part but the strange perspective made some of this hard to follow. Later on there is a very short...short that was filmed in black and white with a fake grainy filter added, again this didn't do too much to stand out to me. The best of Empire State of the Dead in terms of actual plot is the wraparound film that has a few soldiers out exploring. This had the most classic zombie moments and due to the recurring characters I came to like the interactions the three main soldiers had with each other. By the time it comes to the epic finale with these guys I really had come to like them, and their unending talk of just what they should be calling the foes they face. There was a flavour of Zombie Creeping Flesh to the way this plays out with a huge warehouse full of the undead making for some exciting scenes (plus a classic zombie film trope of a character opening a door to accidentally unleash a wave of ghouls who instantly swarm over him). Also the soundtrack for this last segment was really nostalgic and gave a strong eighties vibe to the proceedings.

The zombie make-up is inconsistent throughout with some looking much more the part than others. Zombie children pop up in places but look like they are getting in to their roles a little too much, while a few of the shorts suffer from having rotters that look far too human with barely any make-up to them. The acting ranges from solid to poor, this unbalanced quality leads to some bad moments such as silly looking scenes of survivors getting attacked. The special effects again suffer quite a lot. It is fun seeing people eaten, and there are at least three different moments someone gets ripped apart with their entrails being pulled out, but they never look even vaguely realistic. There are a lot of CGI gun shots and blood splatters that look pretty bad, though in the case of Revenant it actually added to the B-Movie feel. With these being indie films it didn't really bother me that some effects were not the best, it always just makes me think of the golden age of Italian zombie films with how enjoyably tacky they were. 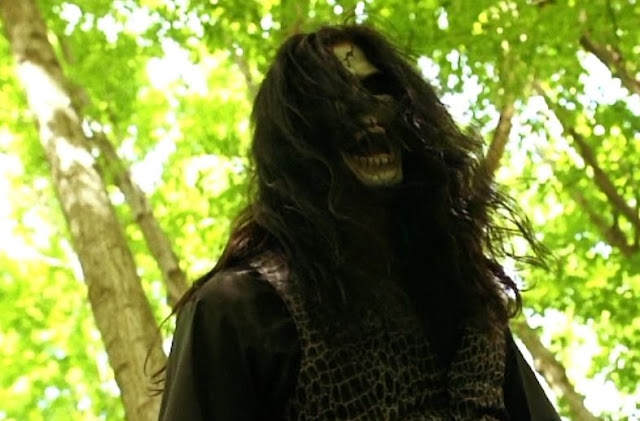 As an anthology Empire State of the Dead has a lot of fun and entertaining elements to it. The quality is at times patchy though and I felt that the less interesting shorts got in the way of my overall enjoyment. There were a few stand out characters, mainly with Johnson and Isaac both playing interesting bad guys, while it was nice that the wrap around sections were something I was happy to keep revisiting, even if the film does end with the story nowhere near complete. On that note stick around to after the end credits to get an added section for the main plot.