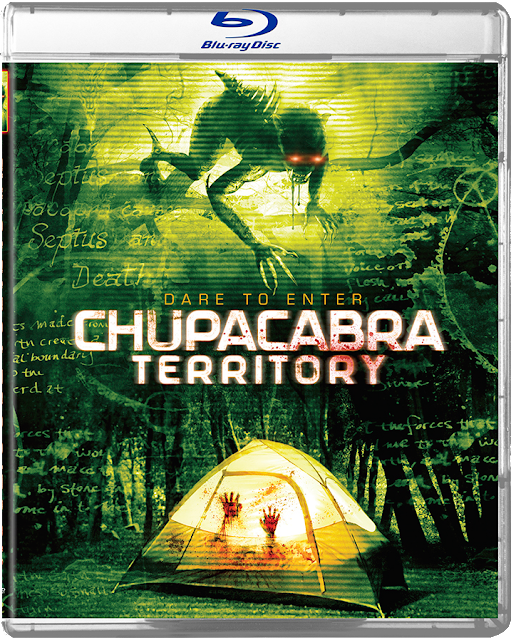 There has been a new breed of found footage horror movies lately, over the past year I have continually been impressed with what I have seen due to them innovating and trying new things. Chupacabra Territory though is quite old fashioned in it's found footage, the biggest inspiration seeming to be 1999's The Blair Witch Project. While it has been a while since I have seen a traditional 'lost in woods' film it still suffers from being pretty generic.

In 2012 four friends head out to the remote Pinewood Forest in order to document evidence of the existence of the legendary Chupacabra creature. Despite warnings from the locals, and a park ranger telling them the trail they intend to take is closed off due to the dangerous animals that live there they still decide to continue. On screen text at the films start states that the footage shown was pieced together from cameras found in the area, and that the friends are missing, presumed dead, and so you can guess that things are not going to go well for them... 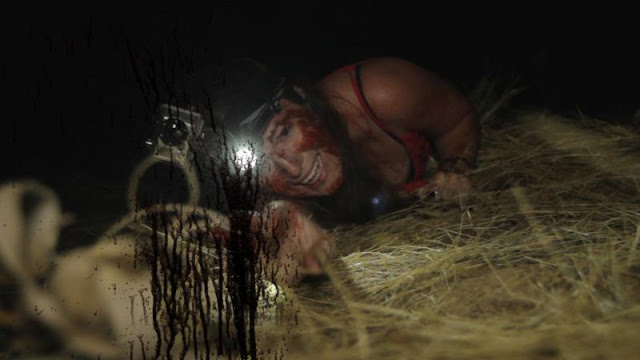 Now Chupacabra Territory does have it's moments, yet for most of the ninety minute run time it was all but impossible not to notice the many tropes of the 'lost in wood' found footage genre that this religiously sticks to. We have an over abundance of shaky cam and blurred images, convenient camera malfunctions and frozen images, as well as a foursome who seem to alternate between arguing and being best pals between scene cuts. We even get the earnest survivor talking into the camera apologising to the family of their friends for what has occurred. All this led to a vague sense of tedium and deja-vu that persisted throughout. This even conjures up some issues of it's own such as one of the most inappropriately placed sex scenes I have ever seen, literally sleeping together in a tent as friends are running around getting killed and screaming outside, not helped by the couple being in a different sex position each time it goes back to showing them!

There are some slight changes to tradition which were more appreciated. First the film takes place over just two days, the majority being day one. Secondly at one point a second random group of friends in the woods are encountered. This new group may be even more vapid than the first but it helps break up the film a bit by then showing their footage, culminating in a nicely edited scene of the first group messing around at their camp site mixed with the second group getting attacked at their one. There is also a weird supernatural vibe that occasionally occurs. One of the group; Amber (Sarah Nicklin) is a part time witch and has legitimate psychic powers, often able to tell when danger is nearby. Victims of the apparent Chupacabra end up possessed by it, the creature itself seems to exhibit a high intelligence, and also there is a neutral gas mask wearing biologist wandering the area who seems to have rigged booby traps everywhere. 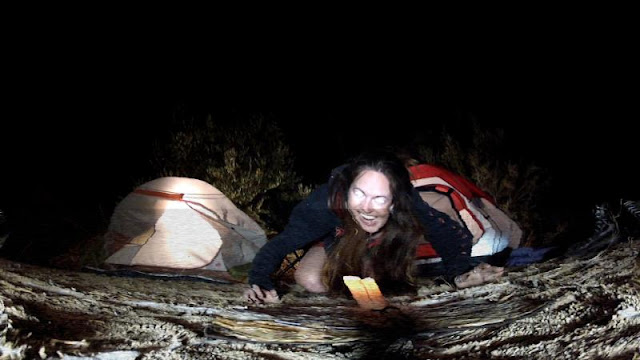 The creature effects are pretty cool due to it only ever being glimpsed slightly, while there are plenty of red eyes glowing in the darkness. There is a high body count here for such remote woodland and many of the death scenes are pretty cool looking, especially towards the end. The last twenty minutes are better than the rest of the film put together, it features some great use of camera distortion and misdirection, giving a decent sense of craziness without ever being confusing. I also loved at times the camera picking up dramatic images that the group don't see, such as when a camera is dropped accidentally to reveal what appears to be a severed arm hidden in a bush, but which no one actually sees themselves. The plot is very simple and at times it felt pretty silly, I had no idea why the friends didn't decide to get the heck out the area after their first troubling day and instead carry on, they all seemed pretty laid back and relaxed for people in a very bad situation. The main cast are not that bad with their acting, Nicklin seemed pretty believable at times, while Alex Hayek stood out as Morgan; pretty much the only character who had any real personality to them.

Chupacabra Territory would have been so much better if it had been the first film of it's type. However the comparisons to past found footage horror's just can't be ignored, despite some decent moments all too often this just brought to mind other films, while the pacing felt a bit off in general. Chupacabra Territory was released on April 11th on Blu-Ray, DVD, and Digital HD. It is exclusive to rent/buy on Flixfling for 30 days and will then come to iTunes, Amazon Instant Video and Cable VOD platforms. Check out the trailer below...