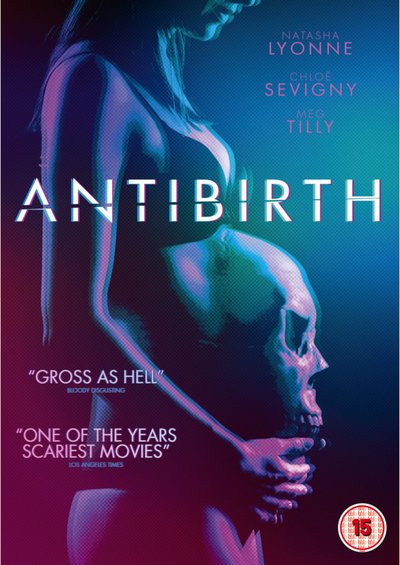 I figured from the title alone that Antibirth (written and directed by Danny Perez) was going to be about a demonic child, yet this Canadian horror delves more deeply into issues of drug use and even has some sci-fi elements to it. This is a slice of life horror in which we get to follow a heavy drink and drugs user as she tries to live as best she can.

Living on the edge of society in a washed out remote town, habitual drug user Lou (Natasha Lyonne from #Horror) wakes up one day after a messy night out in which she blacked out, with all the signs of being pregnant, despite not having slept with anyone in the past six months. As her condition worsens she begins to get hallucinations and lost time, while her skin starts to rot and fall off in places. She is found by Lorna (Meg Tilly - Psycho II) who seems that she may have the answers to Lou's inexplicable condition. Is her strange illness down to the new drug she has been taking, or is there a more insidious cause? 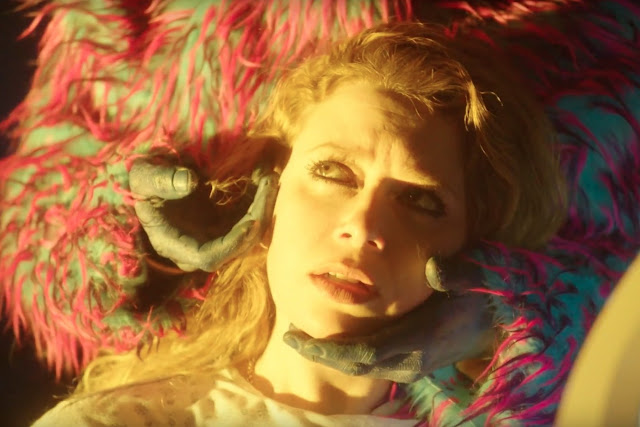 For much of Antibirth's one hour thirty four minute run time there is not much horror to speak of, in the traditional sense at least. Lou, and everyone she knows are the dregs of society, drug users, homeless people, and perverts. The remote and often snowy setting, along with a feeling of hopelessness and base line survival brought to mind Fargo to me, albeit one where there doesn't seem to exist a police force of any type. There is a consistent tone throughout that shines not only through the cast, but also in the wonderful set design. There isn't a single location that doesn't look dirty and worn down, from the flat Sadie and her drug dealing boyfriend live in, to Lou's trailer home, and even the local bowling alley; all feel like Silent Hill locations if that town were a real place. A shout out has to go to the fantastic TV channels that are shown at times, it seems the town has only the one channel, and a really trippy and unsettling one at that, weird cartoons, psychedelic shows, and even adverts produce this really off-kilter edge to them. These added a lot to the sense of societal break down that is maintained throughout.

It was good to see such a strong female lead in the form of Lou, though with the amount of drinking, smoking, and drug taking she does when she knows she's pregnant is obviously not a good message to send out, though it is plot important she does this. There is something attractive about the way all these characters live, a wildness that channels into the character of Lou who despite all the messed up stuff happening to her just weathers the burden of this mysterious pregnancy. I also found Tilly to be a strong side character as well, in fact there wasn't a single actor or actress here who seemed out of place, the cast choices were pretty strong. Also strong was the directing, there are plenty of long shots rather than chopped up editing for the one on one character scenes which I enjoyed. The editing for the flashbacks and the dream sequences were the opposite; fast, mixed up and blurred which were great at giving a sense of the confusion and memory problems Lou gets. The best edited sequence of Antibirth for me was the eventual revelation of just what happened for her to get as she is. 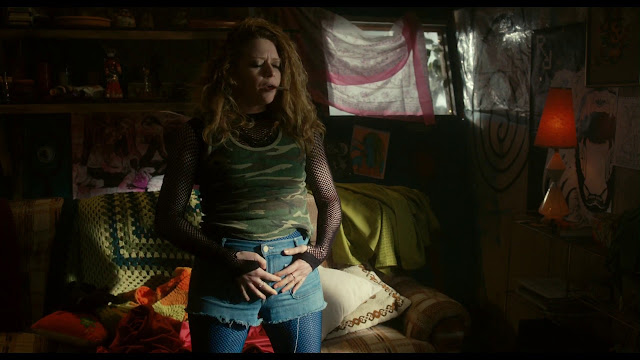 So the horror is marginal in the scary things happening department, there is more a sense of mystery and paranoia built up, a Twin Peaks type of vibe going on. There are moments of grossness such as when flesh is being peeled off, while the climatic birth scene I wont ruin, but I will say it needs to be seen to be believed! The physical special effects are great, loads of watery blood and pus, and decent effects to show people who have succumbed to the new drug more than others. The CGI effects on the other hand are pretty awful. One of the side effects Lou experiences is that electrical devices play up around her, leading to one terrible looking part where a microwave suddenly spurts out very artificial smoke. Some of the CGI does work though, so it isn't all terrible. There are quite a few flashbacks used at times, occasionally it was hard to tell at what point in time the plot was at, there was at least one time I was well into a flashback before realising it was one. Also there are some strange segment crossovers, the aforementioned microwave incident ended a scene, this made me think that the characters involved had been injured or worse until they reappear not long later perfectly well with that never mentioned again.

I enjoyed my time with Antibirth, I enjoyed the consistency of the characters and locations, and the films pacing. Not so good was the plot that had some great ideas but was a bit disjointed. Still this wasn't a bad way to spend an hour and a half. Antibirth was released on Digital on 27th March, and DVD on 10th April thanks to Solo Media and Matchbox Films. Check out the spoiler filled trailer below and see what you think.