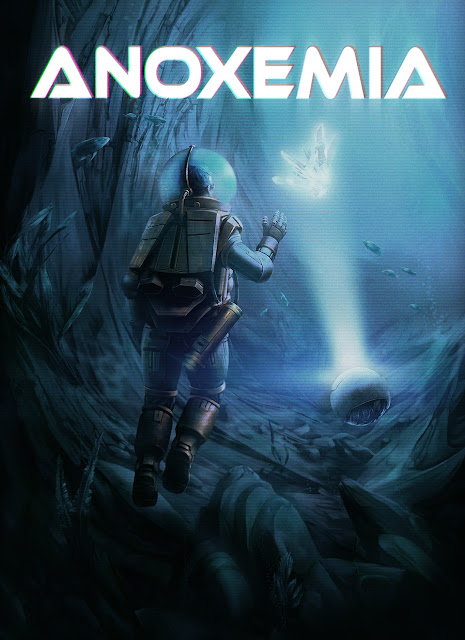 Anoxemia was first released on the PC back in 2015, though it was only released on the Playstation 4 and X-Box One on 28th March. As this underwater adventure contains moments of horror I felt it was a good enough fit for a review on my blog.

Set in a post apocalyptic world recovering from a devastating distant war you play as an operations drone named ATMA who is escorting scientist Dr. Bailey deep below the waves in a dangerous region covered in acid, in order to retrieve important samples. Unfortunately your submarine crashes on the ocean floor, trapping you there with the Doctor, who decides that despite loosing his sub the mission is too important to abort and so sets off in diving gear. However being trapped isn't your only problem as there are many still operational relics left over from the war, ones that are programmed to kill... 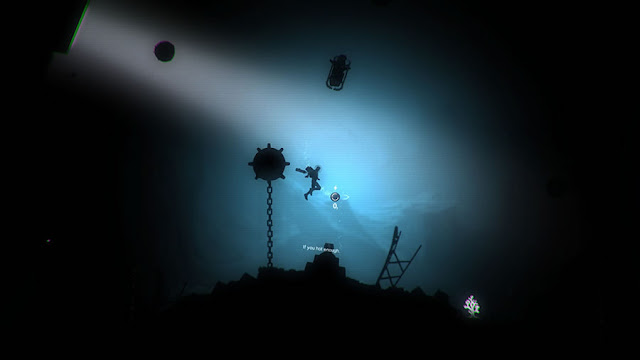 Anoxemia is a 2D level based exploration game in which you usually have to either find the exit to the level you are on, or find a set number of samples (which range from fauna, captains logs and scientific devices). The levels have a slight maze like structure to them, while they are populated with motion activated mines, gun turrets, lasers, and hostile drones. ATMA gains a few abilities as you make your way through the game's thirty eight levels. It gets the ability to shoot out a rope which can be used to destroy mines and move blocks, it also gets the ability to shoot out an EMP blast that can temporarily disable enemy drones. It's most useful function is to send out a sonar wave that can detect the general area where the items you are looking for rest, as well as display how much oxygen Dr. Bailey has left in his suit, and how much battery ATMA has left. Both battery and oxygen are constantly draining, and this carries over from level to level, this meant occasionally I would start a level pretty much near death and so would have to drastically search out items to replenish my supplies. When there were pick-ups nearby this wasn't so bad, the times my survival relied on item boxes was more of a problem. The item boxes are single use, meaning if you die and reattempt the level the boxes are annoyingly no longer there unless you quit out the game completely.

Now Anoxemia increasingly became very frustrating for me. Levels in general are quite short and can be gotten through in a matter of minutes, and to begin with they are open enough that traversing them is no issue. My main problem is that while you control the drone, the Dr. follows you like a lost lamb. He heads towards you in line of sight fashion, so if there is a deadly trap on the way he will happily walk right into it and die, forcing a restart. You can tell him to wait but should you get too far out his view he will once again head straight towards you. This often leads to him getting stuck on scenery, especially in the later half of the game where the levels are much more confined. By the end of the game I was easily having to go back and retrieve him from scenery ten to fifteen times a level. I could put up with it if that was all the issues I had but when you factor in the puzzles Dr. Bailey's anti-intelligence becomes a huge problem. I lost count of the number of times I would be halfway through a semi complicated block puzzle (having placed Dr. Bailey far out of harms way) for him to then come careening towards me like a bull in a china shop shoving my carefully positioned blocks everywhere and occasionally trapping me in a corner, forcing me to restart. One level; level 31, must have taken me at least fifty attempts to do thanks to his intrusions. 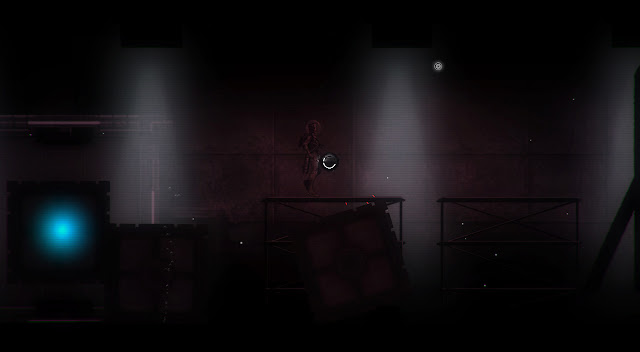 The game is at its best when you have the freedom to explore the environments. There is only the one music track throughout the game but it works for the underwater setting, being all mysterious and inoffensive. There are a few different places you get to go to, starting off in caverns you gets to explore a sunken submarine, as well as a flooded underwater facility. The plot is fleeting and wasn't displayed in the best way. Every five or so levels you get a comic book style cut scene, now that wasn't bad, but as you play ATMA's thoughts show up in the level as text that is localised to a specific area of the level. Klaus Klaus did a similar thing but it's text stayed on screen, here the text vanishes and more often than not I would miss it as I didn't want to waste precious oxygen and battery by hanging around to read it. Horror comes in the form of weird nightmare sequences Dr. Bailey experiences where the level becomes jammed full of dead bodies. It all hints towards a resolution that was pretty obvious but wasn't bad.

There is fun to be had here, when Anoxemia works it isn't much of a hardship, yet it is the handful of more tighter, puzzle based levels where I really began to feel this was a chore more than anything to play. It is a shame as on the whole it really isn't bad, the graphics do a decent enough job, while the underwater setting makes for a different feel. I just wish something had been done with Dr. Bailey to make him less of an utter irritant as having to baby sit him for thirty eight levels really began to grate.