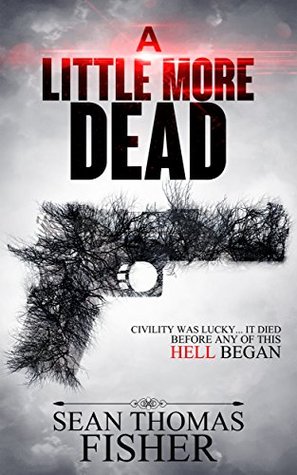 I have an admission to state; I totally suck at reading eBooks and back in the day I wasn't happy to refuse any books sent my way, and so over the years my pile of shame continued to grow. The main issue I have with eBooks is that they don't feel 'real' to me over traditional books, there is no sense of satisfaction having read what is essentially a file. The other edge of this defeatist sword is that I am kryptonite to eBook readers, they always die on me. Enough was enough though and I brought a Kindle that turned up this morning. Now Sean Thomas Fisher sent me a copy of A Little More Dead two years ago, over that time I had managed to read 78%, so today I mopped up that one, so huge apologies for the slow read! Parts will also be foggy as I have been reading this for so long.

A Little More Dead takes place in the 18 days following a sudden apparently world wide zombie apocalypse. Dan, his best friend Paul, and Paul's wife Sophia are on the road attempting to find a place of safety, along the way they pick up other survivors such as a mother and her two young boys, and Wendy; a woman they find hiding out in a strip club. The group are forever harassed, whenever they stop they come under assault from the furious, deadly undead, things seem quite hopeless...

This book is really quite depressing, the misery the survivors have to endure is endless, there is something quite scary about the zombies here. They are pretty unstoppable, and different from others in that they are strong, fast, and as the days progress start to show some sort of rudimentary intelligence; able to set up ambushes and attack in packs. There was a sense of the comic book Deadworld in that this is a world where the dead outnumber the living ridiculously, even only a few weeks after the apocalypse occurs there seems to be barely any living left. Whenever the group are not moving Fisher creates a sense of hidden omnipresent danger with even the most trivial tasks such as refuelling ending in brutal attacks. There really isn't any character who is safe from this violence, though there is not a high cast of humans there is still a large body count with even people you would never expect to be killed getting taken which never stops being surprising. There are never huge hordes found here, they always seem to be in small groups, but then much of the book takes place out in remote countryside rather than bustling cities.

Most the chapters in this 325 page novel are pretty brief, this matches up with the stop-start nature of the characters journey with them never staying in any one location for more than a few chapters at a time. I enjoyed the chapters that dealt with the time leading up to the outbreak as well, the clearly headed chapters creating a bit of time travel by heading back to explore relevant events pre-disaster. There are frequent battles with the zombies, always ultra violent and shocking in the tenacity the undead show. This is mixed in with relative downtime as the group hide in abandoned houses, or their car, trying to work out just how they are going to survive. As the numbers get fewer and fewer all hope seems lost which is reflected in the attitudes. There were some powerful moments, here, most memorable was a chapter that was just a single sentence long. The flip side to all this misery is that a fair few of the characters become irritating as the story goes on. People who have lost loved ones shut down, seemingly caring little about their friends and becoming a burden. People make the most stupidest decisions when confronting their sorrow and while understandable some of the characters did grate on me. It was interesting how backward looking the characters were, for Dan and Paul especially their actions in the past weigh heavily on them with a huge amount of guilt affecting them in the present.

A Little More Dead's biggest achievement is maintaining a sense of desperation and hopelessness throughout, this feeling is complete and was nice to see that sometimes good things don't really have to occur, even if this makes for a bleak nihilistic read with discussions of God and other such topics all negative. In the time it has taken me to read this two more books in the series have been released, it would be interesting to see if hope ever comes to this empty, desolate world.

Posted by Daniel Simmonds at 08:32