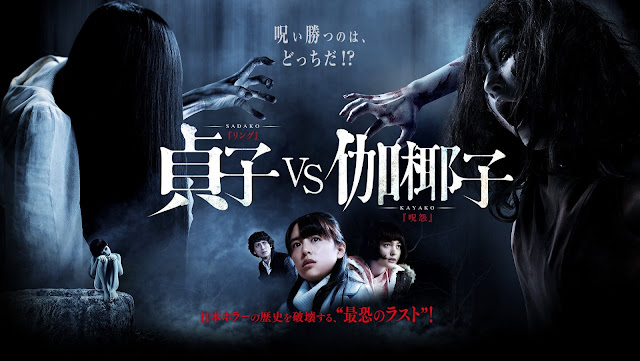 As I turned out to be one of only ten people who actually enjoyed Rings; the third film in the American remake of Ringu I felt that the newly released Sadako vs Kayako would be a good film to cast my eye over. Sadako of course is the antagonist of The Ring/Ringu series of films, while Kayako is the evil female spirit from The Grudge films. Villains of different franchises facing off has obviously been done before, both with the awful Alien vs Predator films, and more fittingly with 2003's Freddy vs. Jason. I figured this latest mash up would pretty much be that but with an Asian spin.

After buying a second hand VHS player at a store Yuri (Mizuki Yamamoto) and her best friend Natsumi (Aimi Satsukawa) discover there is an old VHS tape still inside it. Natsumi decides to give the tape a view and is horrified to discover it is the cursed tape spoken about in urban legends. She has just two days before Sadako arrives to kill her. Meanwhile Suzuka (Tina Tamashiro) moves with her parents to a house that is next door to an abandoned household that is said to be where a murder and then suicide happened, she soon finds herself drawn to the haunted place. After Yuri seeks the aid of a renowned spirit medium; Kyozo (played by Masanobu Ando from Battle Royale) he comes up with a plan to end both the curse of the videotape, and the curse of the house by pitting the evil spirits of both against each other. 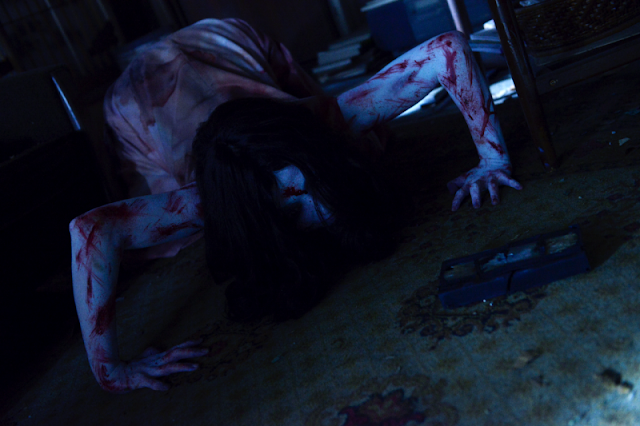 Out of the two franchises it is The Ring that I found to be the more enjoyable, at least when it comes to the first film, I found The Grudge to be pretty dull and also confusing. So what is good for me is that the primary focus is on the Sadako story, the haunted house of The Grudge is relegated to a sub plot that is infrequently visited, in fact Kayako herself doesn't even make a proper appearance until 75 minutes into this 98 minute movie, while Sadako appears in the prologue and then at many points there after. Bizarrely I found story beats that were very similar to ones in Rings, I don't know if this was purely coincidental or not. First is the way the cursed tape is discovered, the second part involving something that happens with the internet. I liked how both curses are introduced to the viewer as part of a lecture on urban legends that Yuri and Natsumi are attending, it brings newcomers up to speed somewhat on the general rules surrounding both, I also liked how the impracticalities of the videotape curse in the modern day world was addressed.

Usually with Japanese horrors it is not so much about action but more the whole mythos and atmosphere surrounding the horror. So I was quite surprised to find a rather large body count, by the films end at least fifteen people have been dispatched in various ways both on and off camera. Sadako's method is either to scare her victims to death or cause them to kill themselves, Kayako on the other hand is more hands on. Both have multiple victims having their heads twisted around at very uncomfortable looking angles. While The Ring is the better film I had forgotten how creepy Kayako could be, here you get a repetition of her painful looking crawl down some stairs, and her unique sounding guttural moan, as well as many appearances of the pale boy ghost with the cat noises. Sadako gets her iconic crawling out of a TV screen effect, and her just as iconic extreme close up of her eye when she kills her victims. The Grudge part has the most scary scenes with a part involving a bunch of young school children foolishly going into the house. 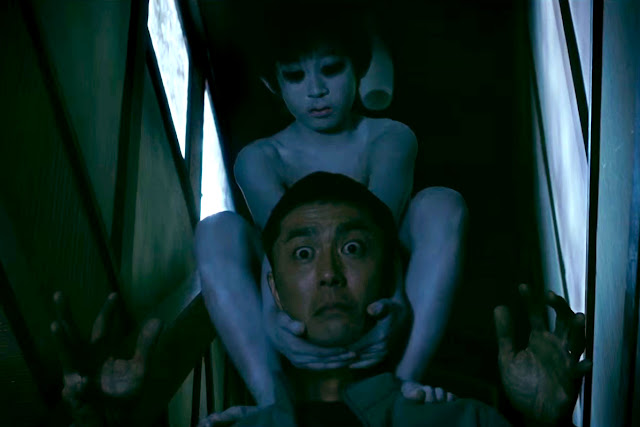 Onto the actual versus part of the film then. The films title is kind of misleading, sure Sadako and Kayako do have a fight of sorts, yet it barely even lasts five minutes and they seem pretty evenly matched. I can't deny it was awesome to see the cursed videotape get crushed under Kayako's hand, and the pale boy ghost get swallowed up by Sadako's hair. As it is a horror this fight is swiftly dealt with so that the humans can get persecuted instead, this had some entertaining parts to it yet led to a very abrupt ending that made me feel like the final five minutes had accidentally been chopped off and left on the cutting room floor! The acting is patchy in places, the main characters are all fine, I found the duo of Kyozo and the small blind girl in red to be very off putting. Kyozo had stupid sound effects play whenever he did a hand motion to ward off evil, the girl on the other hand just wasn't played by a very great actress so both seemed larger than life which was abrasive to the tone of the rest of the moody and sombre film.

If your a fan of either franchise there is stuff to like here. I got a bit of a geek rush when the titled fight began, while each of the antagonists have enough attention given to them to make them seem suitably imposing. Still if you ignore that side of things then this doesn't shine that much, with characters you don't really feel anything for it was a task to ever feel too invested in the overall story which was a slight shame, I did not expect the high body count though which stopped things ever getting the chance to be dull.

Posted by Daniel Simmonds at 12:58