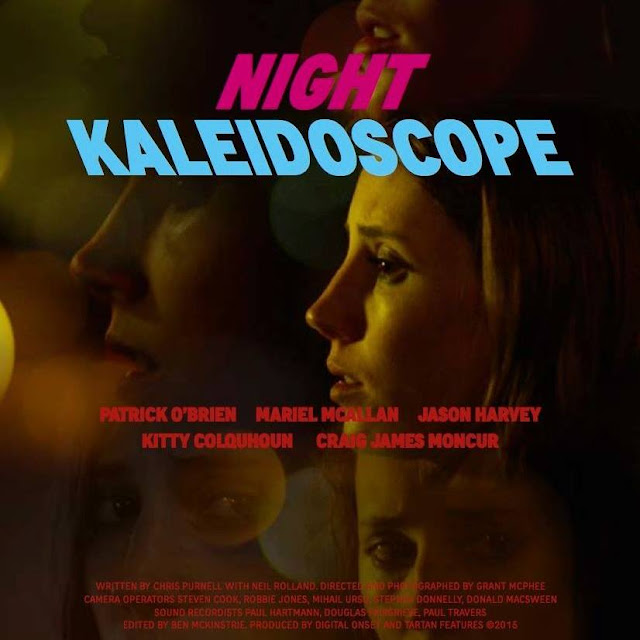 I first heard of Scottish horror Night Kaleidoscope back at the start of 2016. This indie film by Grant McPhee was filmed in the span of a week for a micro budget of just £4,000.  It is quite a bizarre and trippy piece, yet it is also an example of a film that proves lack of money does not mean you can't still make a compelling film with decent actors.

Patrick O'Brien stars as Fion; a Scottish alcoholic psychic who investigates the more stranger side of crime, stuff that the police won't concern themselves with. After a tip off about a series of strange and violent murders by his detective acquaintance Pollock (Craig-James Moncur) Fion discovers that there is a vampire type creature on the loose. This being soon becomes aware she is being pursued by the psychic. Teaming up with a woman named Isobel (Mariel McAllen) Fion becoems determined to hunt down and stop this danger.

Rarely do you come across a film as strange and hypnotic as Night Kaleidoscope, the movie is essentially one huge kinetically edited fever dream backed up by a fantastic 80's synth rock soundtrack. For all that happens here there is very little dialogue, by fifteen minutes in I think about two lines had been spoken, by the end of the 83 minute movie I reckon there was about fifteen minutes total that featured characters speaking. This made the film stand out, it had a hypnotic addictive quality to it that simulated the feeling of being on drugs, much like the main character himself regularly was. The editing comes fast and snappy, never lingering on any one shot for more than a few seconds, yet it is cohesive at many points, and has the knack of being cylindrical in nature, going back to previously shown scenes time and time again. A plot point is that Fion smokes drugs to trigger his psychic powers he uses to relive past events, and to track people down. During these segments is when the fast editing makes the most sense with the camera zooming down the dark streets of Edinburgh in choppy cuts. The style of Night Kaleidoscope is phenomenal in terms of the marriage between visuals and the ever present solid soundtrack, as I said back in my preview this does feel like a music video transformed into a film.

With all the style it is the plot itself where the film suffers at times. While on the surface the story is quite simple it could often be hard to follow what was going on, and just who the minimal cast all where, and the roles they played. The best example for me was Isobel, she just shows up at one point and teams up with Fion, yet I never worked out just how she came to be involved, is all rather enigmatic. The same happens with scenes of key importance with twists and turns all occurring in the speedily edited almost art-house type segments. Due to this I at times became lost, on a few occasions had to rewind the film a few minutes back to understand what had happened. Important stuff happens off camera and is only cryptically referenced by the cast, at many points I felt it was left up to the viewers to piece together what was happening. Sure that was a pain on occasion but it was nice not to be force fed a tightly bolted up story, being able to piece together in my own mind what I personally thought was going on made a nice change. Due to the awesome editing this really didn't come across as a low budget horror, there were not many points where I could see the cracks showing.

O'Brien is a strong lead as the tortured Fion, in fact the main cast are all good in their own way for the most part. The bit part characters such as Pollock all felt like they added important elements, while the antagonist is mysterious and unexplained. The body count is higher than I expected it to be and each of the death scenes felt memorable in it's own way. This is a spin on the traditional vampire genre with the woman killing using a dagger rather than having fangs, she still drinks the blood of her victims of course, and sunlight has some effect, though these vampires can walk around in it, if in a weakened state, and also are said to be flammable. My favourite part of the movie took place during one of these kill scenes when a woman with cat face-paint on is taken away to a bathroom and sliced up. Her face was projected onto another characters to create a surreal and trippy look. These projections are used at many points and just add so much to the dark brooding style. The cutting effects were enjoyable with people getting their bodies messily carved into in a grim fashion.

Most of the film takes place at night and has a melancholy and pessimistic feel to it. All the characters are dark and serious, while the locations they inhabit are dilapidated and forlorn. The sets are wonderfully designed, graffiti strewn, and full of fairy lights and candles. This look heavily reminded me of Rob Zombie's style of creating beautiful ruin. The darkness helps a lot with the low budget, while also helping to sustain a sense of confined atmosphere.

Night Kaleidoscope is so different to much of what I have seen lately, it could be accused of style over substance, for at times it did seem the atmosphere was prized over telling a coherent tale. For me though I loved how cohesive this style was, it may have it's faults but it was spell binding and had some great casting choices. Night Kaleidoscope is out now to watch on Amazon Prime, and has also been released both on region 2 DVD and VHS.