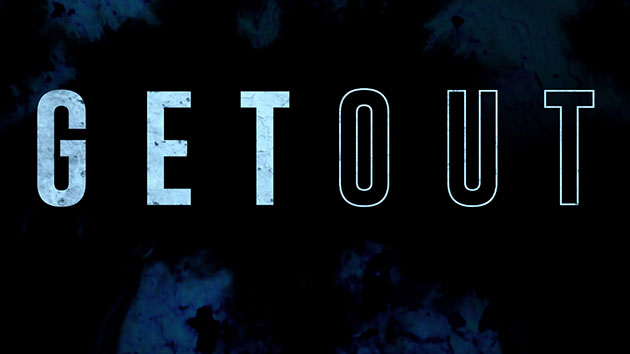 It is quite rare when a horror film gets into the public consciousness, so I was pleased to see Get Out achieve that. All my work colleagues had heard of it and appeared interested that I was off to see it, my favourite podcast did a big segment about it, and going into the cinema there was a broad section of both old and young people in attendance. If only all horror was this broad in its viewers, though if only all horror was quasi-original and socially relevant as this, rather than the same old tedious paranormal stuff that is so prevalent these days.

British actor Daniel Kaluuya (Black Mirror) stars as Chris; a twenty something black man who is heading away with his white girlfriend; Rose (Allison Williams) for the weekend to meet her parents. Worried how they will react to their daughter dating a black guy she puts his mind at ease explaining they are quite liberal, Things start off ok, the family are welcoming to Chris, though there is a sense of awkwardness around their interactions with him, while Rose's brother Jeremy (Caleb Landry Jones who looked distractedly like a guy I used to know) comes across as a bit shady. With odd acting black staff, and a strange hypnotism incident at the house Chris becomes more and more convinced he needs to...get out. 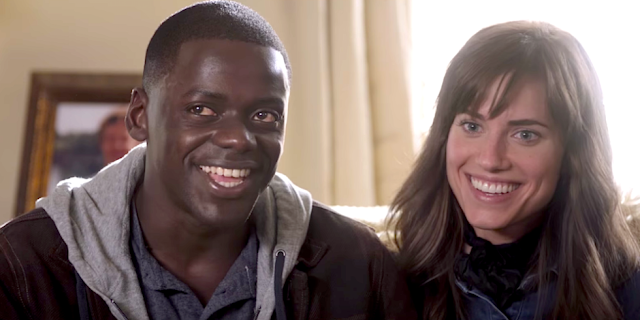 Get Out currently has a 99% positive rating on Rotten Tomatoes, while word of mouth has been mostly positive, but more importantly what did I think? Well it certainly is a good film, social thriller if you will, but it is not without it's problems. I can't fault the acting of Kaluuya, he holds Get Out together with the believable acting he brings to the role. The whole issue of racism has really been brought forward at the moment in the news and so this is a perfect time for Get Out to strike. Kaluuya is at his best with his interactions with the unnerving white people he comes across. It is a combination of both verbal and physical acting that you are able to share his experience. The motivation for the horror aspect actually doesn't turn out to be quite as black and white as just racism which was an interesting and welcome way to go. At times the distinction is made very clear, one part in particular features a white character, dressed in white, listening to white music on their headphones, and drinking milk...that is white while browsing for victims. While I frustratingly can't reveal much of what happens for fear of spoilers what I can say is that black people are the victims, the white people the antagonists, yet in a weird way what they are doing is some kind of twisted anti-racism.

Ok, I realise I didn't actually say what my problems with this film were. My main complaint is the comedy character of Rod played by Lil Rel Howery. The problem is his humour works at the movies start when things are still relatively pleasant for Chris, yet there becomes an odd juxtaposition later on when pure horror is being spliced up with scenes from a light hearted subplot that feels like it belongs in a whole other genre entirely. I get that there needed to be some downtime from the dark goings on in the main story line, but the way this is handled here I didn't like, it was too jarring a transition. Now in terms of plot I guessed what the twist would be not only before it was anywhere near occurring, but even before the film started. To be fair it is about two thirds in the twist occurs rather than at the end so there was plenty more film to enjoy after it happens.

Where Get Out succeeds is the slow, slow build up of tension and the ramping up of escalating unease. Knowing that things are going to go very bad kept me glued to the screen, when it happens it goes a bit into art house territory, though the messed up trailer suggested this. The horror is best with the unease, mostly the slow burn of the garden party. There is a great scene where Chris walks through the busy throng and heads upstairs. Instantly all the guests go silent and all look upwards to try and hear what he is doing. There is also a fantastic bingo game scene that takes place in complete silence. Both those scenes manage to suggest a hidden threat without explicitly saying it. Some of the strongest scenes come with Chris's interactions with other black characters, their performances were all stand out compared to the bland identical look of the majority of the white cast. Maybe that was purposeful as their limited number make them stand out regardless of how utterly crazy they act. There are art house sections at times (to be fair the entire trailer is art house in it's editing), and the scenes that feature hypnotism felt very special. Again not wanting to spoil things but hypnotism does play a large part here.

While Get Out wasn't as scary as I had hoped this is still a solid horror film that should be applauded for doing something different to the norm, this actually felt like it was trying to impart a message stronger than 'don't try to contact the dead' or whatever the million identical main stream horrors mean to say. I love that it has gotten people who wouldn't otherwise pay the horror genre any attention to give it some damn attention. While the comedy subplot is most unwelcome in my eyes there is still enough compelling performances to make Get Out a film that will stick in the mind and is an amazing first feature film from director Jordan Peele.