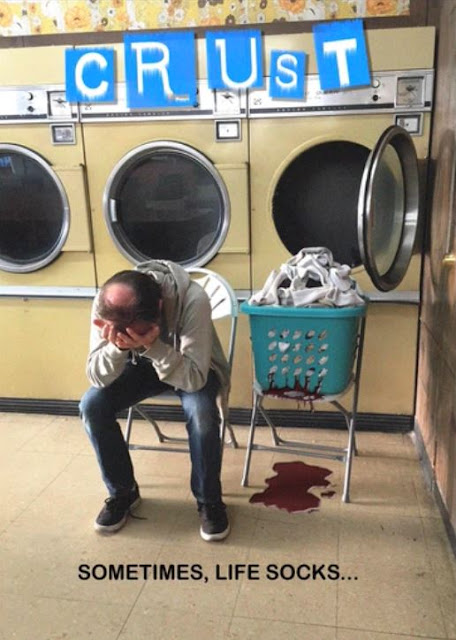 Well finally tomorrow I shall be taking the time to watch a few films for review, my back-log of films to watch is getting somewhat daunting. However it being Friday and the end of a long work week a news post is in order. So onto the oddity that is CRUST...

Sean Whalen (The People Under the Stairs) has written and plans to star in a new horror comedy called CRUST. It is also to star Felissa Rose (Sleepaway Camp) and Scout Taylor-Compton (Halloween I and II). The movie is said to be a creature feature in the vein of Little Shop of Horrors, Gremlins, and Willard. The basic story for this crazy sounding film is that depressed former child actor Vegas Winters (Whalen) works at a laundromat and in his depressive state cries into a pile of socks one fateful night, this somehow creates CRUST; a sock monster. This creature wants to help Vegas improve his life, unfortunately it also happens to have quite a mean side to it. It sounds quite similar to a horror short I saw a long time back about a man whose disgusting fridge spawned a mould monster that wanted to help his creator, but who also had a violent streak. Annoyingly I can't recall it's title but my memory tells me it wasn't amazing, this would likely be bound to be an improvement.

Whalen states the idea for this film come from his real world struggles with depression after getting divorced, moving, and having his father pass away all in the space of a year. He says of it: "It's a horror comedy. It's fun, it's different, and it has a heart. The heart is CRUST, because I believe we would all love to have a little monster that would do anything for us when we are in our darkest times." CRUST currently has an Indiegogo Campaign going to raise funds to begin physical production, currently it has raised $3,776 of it's $60,000 goal, but with 22 days left on the campaign there is still time for it to be successful, I wish Whalen all the best. As always there is a variety of perks, check out the Indiegogo page here.
Posted by Daniel Simmonds at 10:50