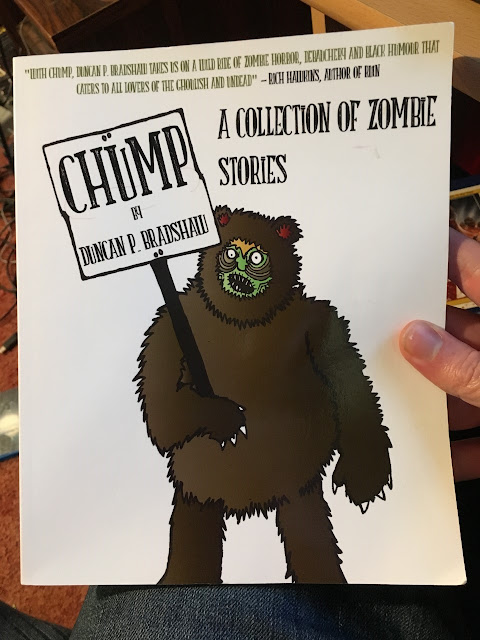 I set myself the aim this year of reading one book a month. Coming from someone who used to read fifty plus books a year this shouldn't have been a problem, yet here I am near the end of month three and I have just finished my second book of the year; Duncan P. Bradshaw's Chump which is a collection of zombie stories, a twelve chapter novella, and one poem. I fare badly at reviewing novels, even more so when it comes to compilations so bear with me as I stumble through this.

Previously I have read his excellent and clever zombie novels Class Three and Class Four: Those Who Survive and so knew at least I would enjoy the writing style in Chump. Bradshaw has a way of writing that seems so welcoming and inclusive and that is again in evidence here, as is his love of similes which as always are in abundance. From the bright and exaggerated zombie art throughout the book (drawn by Jon Dixon) I assumed these stories would all be quite humorous, but this is more of an eclectic selection with more serious tales sitting alongside ones of the farcical that cover both Pre-Apocalypse, Apocalypse, and indeed Post-Apocalypse.

The book opens with Millie; a poem about the perils of being in the wrong place at the wrong time wearing the wrong thing, then goes into the stories proper. Cure What Ails You is the first story, it is a zombie Western which felt like something different from the norm. This is followed up by the brilliantly titled 28 Seconds Later which takes place during an inspection at a secret Soviet sports facility. Both of these are written semi seriously but with great dialogue that shines with ridiculous conversations between characters, 28 in particular manages to create quite an epic story in just fifteen pages. Red Sabre One is the most serious story to be found in Chump, it was cool to see Bradshaw write a pretty much straight faced tale as I have only read the comedy side of his books. This one was about a special forces team fighting their way to 10 Downing Street to rescue the Prime Minister during a zombie epidemic. I guess there was the one joke in reference to our past PM's alleged amorous interactions towards our porky pals, but that is to be expected, that is right.

Next comes Senseless Apprentice which is the most interesting story in the collection. It explores just what happens to the soul once a person becomes a zombie which was something I had not read before, plus it is pretty hilarious which helps a lot. Dead Drop; the twelve chapter novella is next in line for the book. Some extreme violence is on display here with someone getting a drill into the arm, all described in nasty detail that made me feel slightly ill! This reminded me a little bit of the Kevin Costner film The Postman, only in that it is about a delivery guy in a post apocalyptic world. It has some novel ideas here that help keep it feeling fresh and was fun to see a character from a previous part of the book randomly pop up. Following this is Charity Begins At Home which was well written and fun, though it was very obvious from the start what was going to happen. Gone Fishin' was my favourite story of the lot, it is very silly, and very over the top, but very funny as a result. It takes place in a bustling lake where zombie fish have emerged and features some utterly ridiculous moments that were just a delight. Final story Whackos is set out as a transcript of a radio broadcast that sees a reporter following a clean-up crew as they clean up houses post apocalypse. This had lots and lots of fast firing and insightful conversations that made the fictional characters seem like believable, real people.

All in all I enjoyed Chump, much as I expected to do. I read most of the book while on lunch breaks at my day job; wrapped in a sleeping bag in my car in the cold. I had a few minutes left after finishing the final story today so thought I may as well read the adverts for Bradshaw's other books. I was quite surprised to see a quote from me as part of the Class Three page! Was the icing on the cake really. Overall Chump was an entertaining piece of escapism, and who doesn't need some decent escapism these day?