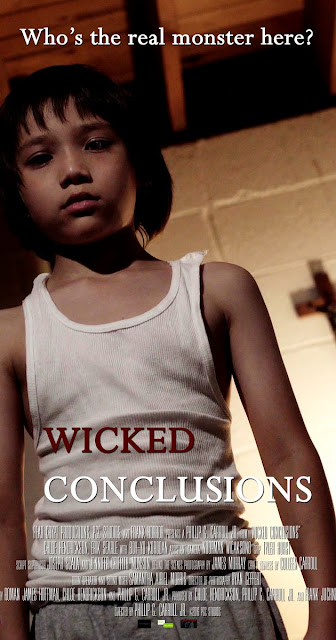 Wicked Conclusions is a short horror film that was made by Fear Crypt Productions and directed and co-written by Phillip G. Carroll. I always love a good short horror, to me the short length means there really is no opportunity to get bored, while the tight time frame means usually a lot of thought has gone into each and every moment to create a piece that is as artistically great as humanly possible.

Amber (Chloe Hendrikson) accidentally discovers a young boy (Boy-yo Korodan) chained up in the basement of the house of the man she had been dating. Discovering this the man (Erik Searle) sees no option but to chain her up also. He tells her the boy is very dangerous and promises to release Amber once she has seen for herself what a threat he is. Is Ben completely insane, or does he know something terrible about the kid?

Wicked Conclusions starts with the story in full swing with Amber already a prisoner. Back story is given both in visuals and with Ben's recollection of what led up to that point which saves on time. Immediately you are given cause to doubt Ben's version of events as he keeps saying he is not going to hurt Amber, yet there she is with a cut on her head which I assume he gave her. Being a short I leapt to a most wicked conclusion on what was going on, and I did turn out to be right. There is a nice atmosphere going on that drew to mind 10 Cloverfield Lane in the way that Ben is trying to act like everything is normal when it is obvious it isn't, and of course the basement location. The way it plays out is pretty cool in that there is an air of mystery to the events. The boy does not appear to be in any distress, he seems to be the most chilled out of the three. The actor is good enough for a child, the same can be said of Hendrikson and Searle who seem believable in their roles. 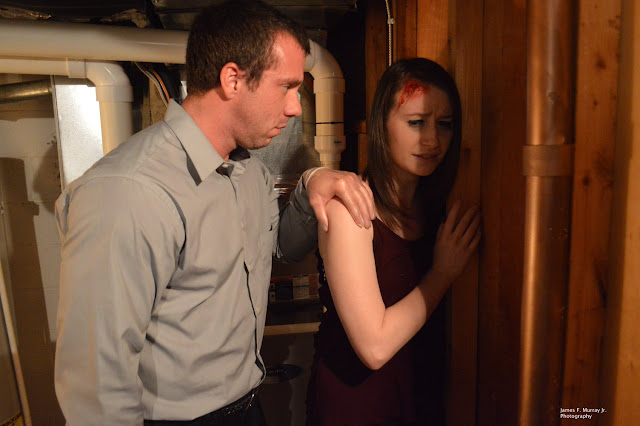 While I felt the initial start of Ben cooking wasn't the most engaging part of the short the actual basement scenes led to plenty of puzzlement about just what was going on that kept my attention. It leads up to some fun blood effects and a fun, albeit predictable finish. For me I felt that better sound effects would have improved the finale as it didn't have as much impact as I had hoped. Wicked Conclusions works best in the world building it does. My main thoughts were on imagining the events that would have led up to Ben's imprisonment of this bizarre child, as other than the actual kidnapping he does just seem like a regular guy rather than any sort of psychopath.

I enjoyed my time with this short, at just twelve minutes it doesn't have to time to do anything wrong, while at the same time I appreciated not knowing exactly why things had happened as they had. The short is available to watch for free on YouTube, I will include the video below (as it does not seem to be a private link).