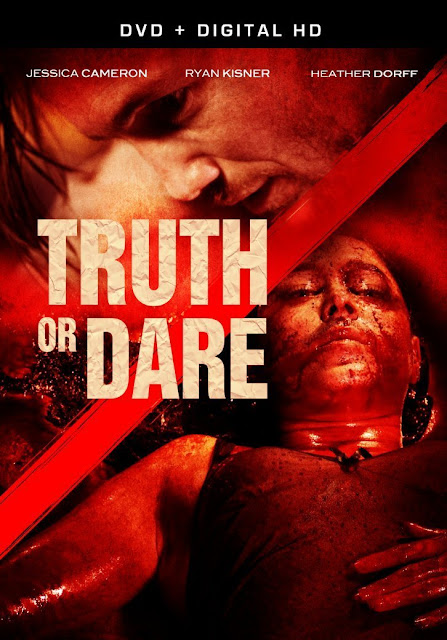 Sometimes not reading up on what a film is about before viewing it can really bite you on the backside. It's funny thinking back to the start of award winning Truth or Dare that my thoughts were how nice it was to get a fun horror that didn't seem to take itself too seriously. Fast forward an hour and a half and I am there in my front room, sweating, clinging limpet like to my sofa, a grimace on my face, wishing for it all to be over. An ordeal! This film was most certainly an ordeal.

The Truth or Dare Devils are a group of six friends including Jennifer played by Jessica Cameron (who also directed and co-wrote this), and fellow scream queen Heather Dorff who plays Michelle, who make seemingly real extreme truth or dare videos on the internet. Their latest video; a twist on Russian Roulette becomes the most popular one yet and it seems their increasing fame is all but assured. However while in the midst of making their latest masterpiece at a remote house, a crazed fan (played by Ryan Kiser from House of Manson) gate crashes and takes them all hostage. Discovering that what they do is staged he has decided to force them to take part in a real truth or dare, a game that as the night goes on gets more and more horrific with each passing round... 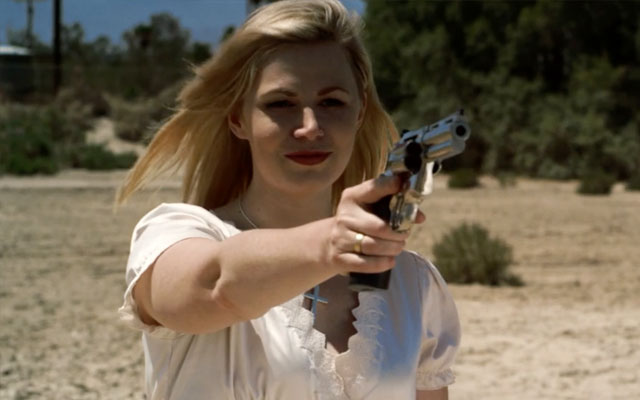 I have never been a huge fan of the 'torture porn' genre of horror films. I get the same sense of survival having seen ones such as Hostel and Saw that I do reading the literature equivalents such as Bret Easton Ellis's American Psycho or Chuck Palahniuk's Haunted. I tend to see films as escapism from the trails of day to day life, obviously with horror you expect some thrills and chills but in general the body horror genre goes too far out of it's way to make you squirm. With Truth or Dare which marks Jessica Cameron's directing debut you get that escapism, but I was glad to get back to the real world!

In a film of this type the horror not only relies on the actors being believable, but also on the strength of the special effects. Thankfully what you see here is very brutal, I'm ashamed to admit on at least a few occasions I had to look away from the brutality. Here you get people eating glass, eye gouging, amateur medical operations, gun shots, stabbings, and a particularly nasty incident involving a bottle. All of these are drenched in sticky looking crimson gore so that by the films end the room the torture is taking place in looks like a slaughterhouse. These effects are all so well realised, and the escalation so constant that they never get dull to watch. 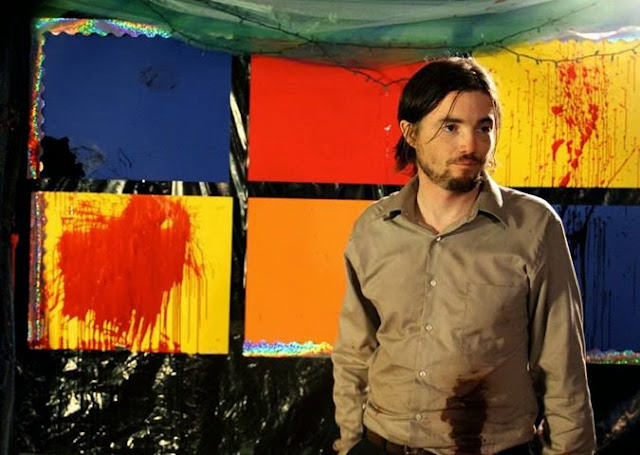 With the majority of the film taking place in one relatively small room there needed to be an interesting discourse carrying on the action, so that it wasn't all just mindless violence. For me I did feel, especially in the later half of Truth or Dare that it was in danger of losing it's purpose, becoming a never ending rotation of suffering. Mostly it is Kiser who keeps things on track, his manic psycho character really comes across as such, forever changing the rules of the game, and more concerned with viewers (he uploads the latest footage at various points) thinking it is all fake than about his hostages. There is some aspects of this that are a critique of famous people, how they project a fake realness to their fans rather than be true. Early on it is revealed the six friends have some dark secrets involving such topics as paedophilia, incest and rape, and so it is hard to care too much about the ones with the more sick revelations. The whole 'truth or dare' angle initially seems a bit wobbly as after the first dare given is so awful it seemed a bit unrealistic anyone would volunteer for that over truths, least later on there is more of a plot based reason for the dares to happen.

Women have just as much place in modern horror than men, anyone expecting Cameron to tone down the sights needn't worry, this is visceral, gruesome stuff that approaches some very sick parts, with the camera rarely shying away from the horror. While I felt more like a survivor than a fan of Truth or Dare I can't deny that due to the satisfying special effects this is a strong addition to the body horror genre regardless of your thoughts of it. If you think you have the stomach for it then check this film out. Truth or Dare has attained physical U.S distribution and will be coming to VOD later this year.

Posted by Daniel Simmonds at 07:24