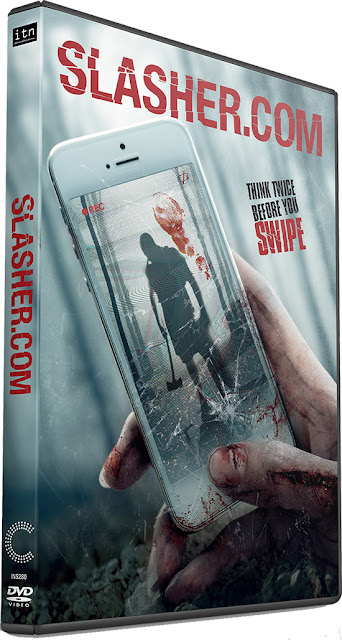 Slasher.com has quite the misleading title that does go in line with a prologue that has pretty much nothing to do with the events of the rest of the movie. I had been expecting a tech heavy slasher (great deductive powers) yet what is here is more in line with crazed rednecks out in the country. This Chip Gubera (Song of the Dead) directed horror has won a variety of awards including Best Screenplay and Best Horror.

A notorious serial killer is on the loose in the city, he gets his victims from online dating sites. During this media panic Jack Roper (Ben Kaplan) has arranged to go to the country for the weekend on a first date with Kristy Smith (Morgan Carter) who he met coincidentally on a dating site. They rent a cabin off a redneck family that includes Jesse Myers (R.A. Mihailoff from Leatherface: Texas Chainsaw Massacre III and Hatchet II), his wife Momma Myers (Jewel Shepard from The Return of the Living Dead) and their daughter Caitlin. All seems to be fine, that is until the new couple wake up tied to chairs in the basement of the Myers's house... 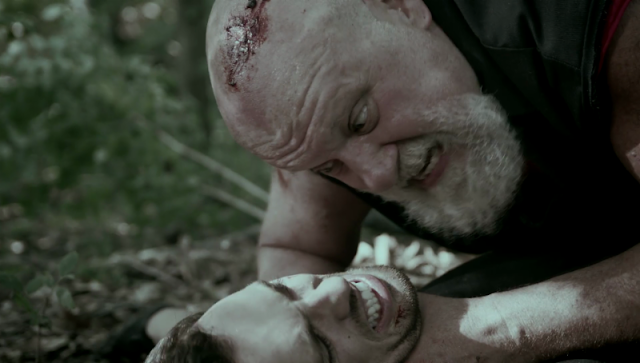 Getting over the strangeness of the film's title Slasher.com isn't actually that bad, it never tries to be anything more than a fun Texas Chainsaw-lite horror. The acting isn't the best but it fits the tone of the movie well in general. The highlights are the Myers family, Mihailoff is a bear of a man and has a presence about him, while Momma is crazy in her own unique way. She is highly sexual and constantly armed with a silver spoon which she constantly sucks and rubs over peoples bodies. This family have a strange sense of unity about them, they are all just as crazy as each other so their bizarre incestuous relationships fit. Of the two heroes it is Kristy who comes off as more likable. Carter plays a head strong girl who is assertive and dominant, though it was a shame to see when the trouble begins it is her who becomes a typical damsel in distress and is relegated to a human McGuffin, serving just as Jack's motivation not to run away. A lot of the film follows Jack, this is a shame as he is just so irritating and cowardly. Now there is a huge (yet obvious) plot twist that occurs two thirds of the way through Slasher.com that affects the relationship all the characters share, this was a really fun twist yet to me it led to no end of plot holes, it almost seemed like characters were two people at once, acting one way and then for no reason becoming other types of people for the sake of the story.

To begin with I was concerned as to the quality to be found here, it doesn't appear to have the strongest budget and early scenes felt a little rough, especially in terms of punching sound effects that don't come off as that believable. However as the film progresses the special effects become much more pleasant. Stand out moment to my mind was someone who gets a metal spike shoved into their head vertically. There are plenty of knife cuts and stabbings, a machete features quite a lot as almost a recurring character in itself. There is a little bit of nudity if that is your thing, thankfully just the one awkward sex scene to get through with a nice Psycho/Black Christmas style peeping Tom moment thrown in for good measure. 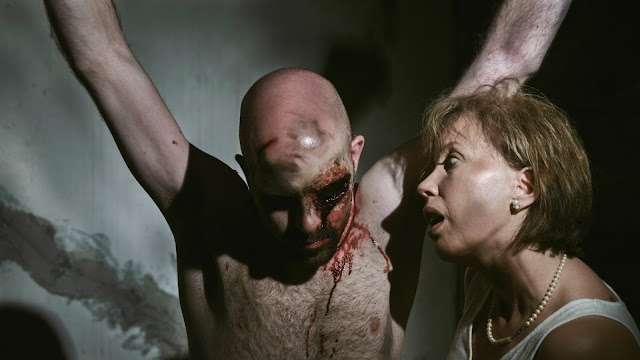 While a huge amount of the film takes place in dense woodland Slasher.com avoids becoming dull thanks to the performances of the cast, from supporting ones such as the hiking stoner and the shady local sheriff to the core cast, they entertain and fit the tone well delivering fine over the top performances. There is also some nice editing at times such as the trippy segment that lets you know the proper horror is about to begin. My biggest problem just comes down to the title as it really suggests something you do not get here, I'm not sure why they wanted to hide the type of film this is unless it was a conscious decision to try and appeal to tech savvy horror fans. The initial message of being careful when speaking to people online doesn't really fit the events of the film. Regardless of that this was a good distraction for 90 minutes. Slasher.com comes out on DVD 7th March thanks to MuchoMuchoMucho Productions and Firefly Films. Check out the trailer for yourself below.