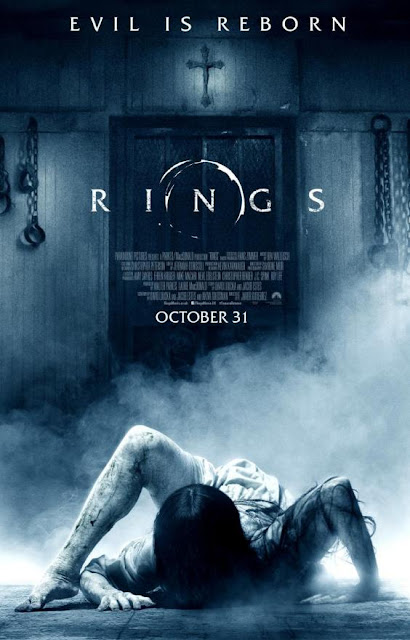 I was quite shocked when I discovered there was going to be a third film in the American version of The Ring series when I saw the trailer for this last year. I shouldn't have been though as this was made over three years ago in the sunny days before 2016. I always enjoyed The Ring films, all the rules that the curse had to adhere to, the seven day deadline, it all felt so fresh to me, as well as creepy. Some twelve years later, and with so many identikit films having followed the style would Rings manage to stand out?

Julia (Matilda Lutz) begins to worry about her away at Uni boyfriend Holt (Alex Roe) after she gets a bizarre video call from a panicking woman talking about Holt and a videotape. Not able to contact her boyfriend by phone she drives to his university to find him where she discovers he has watched 'the tape' and decides to move the curse onto herself to save him. However this sacrifice leads to a change to the traditional rules... 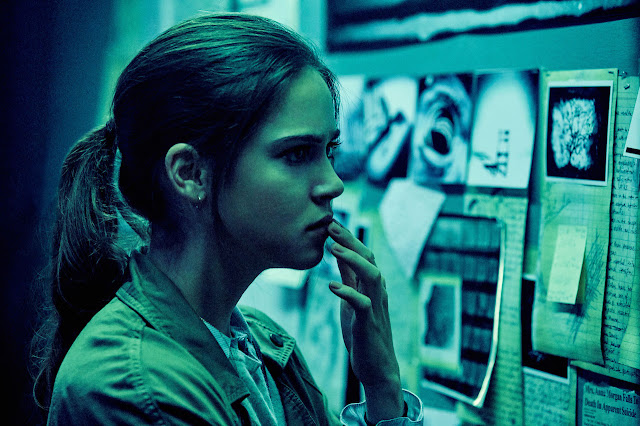 While this is indeed a sequel this also feels like a re-boot for the series treading as it does often familiar ground. Rings is a sequel to the core concept of the curse, rather than one to the events of The Ring and The Ring 2. As such it was good to see old nostalgic sights, but the whole puzzle of the original was deciphering what the cursed footage was actually about, as this was known I wondered what could actually happen in the film. That is soon answered with the discovery of a secret second film hidden within the first. This gives an excuse for another montage of tripped out surreal images that include ants swarming to make a crucifix sign, a flooded graveyard, and a burning body. All of this leads Julia and Holt to Samara's birth town (she is the evil spirit who created the curse) where light is shed on her origin. The first third of the movie is different in style to the other two thirds, with a different feel and tone. Biologist lecturer Gabriel (Johnny Galecki) has created a secret club whose members have all watched the tape, the club is fitted out with huge screens displaying the Ring symbol, while huge blown up Polaroids of cursed people deck the walls. Galecki is great here coming across as both silently menacing, and a bit of a sleazeball. Once this part is over the film settles down into a more predictable fare.

I always found The Ring films to be quite slow paced, a lot of time was spent creating the sterile, depressing atmosphere and occasional scare but more time was spent on long silent scenes drawn out to extreme lengths. It often felt that the wait between any pay-off was sometimes too long. Here it is again similar, at times I did get slightly bored, especially as it is so close in style to The Ring, yet with not as exciting a plot. The investigation part of the movie is the longest bit, the whole exploration of Samara's parents is drawn out but featured some pretty decent parts. At one point Julia climbs into a grave and then experiences a crazed hallucination of being dragged towards a well, that was pretty cool in a Silent Hill way. At other points as well these hallucinations serve to trick her into dangerous situations, I liked how it seems Samara is now able to influence more than just the cursed person, having control over objects such an electricity pylon. It is during the investigation that another great side character is introduced, that of a blind man named Burke (Vincent D'Onofrio) who really comes into his own during a Don't Breathe style sequence. 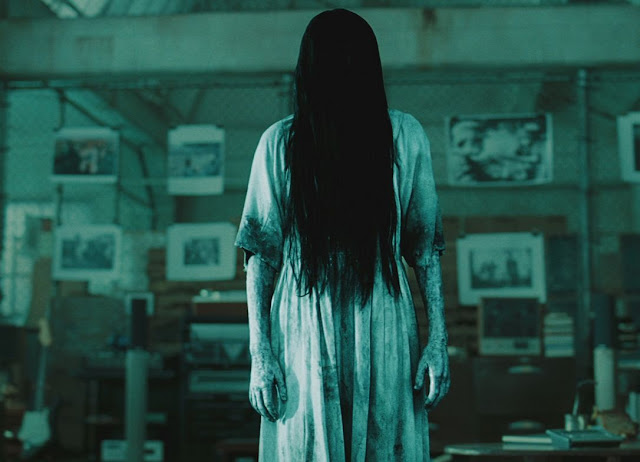 There are a few jump scares here, but they are never too intense. As it is mostly such a quiet film scene changes often bring sudden loud noises, this is exactly what the first films also did to get scares. A more welcome return though is of ever present rain, love me some rain in films. For me personally my favourite part of the original is when you finally get to see just how Samara kills her victims, in Rings this is turned around, at several points at the start you see this in full detail, first during a cool, yet utterly unrelated, and thus unneeded prologue set on a plane. Later this is used so that Julia can realistically believe in the curse (by being a witness to the killing). Because of this there was less incentive to be patient and wait for the end as I didn't see what new things would be shown. I needn't have worried though as Rings ends on a fantastic cliffhanger that makes full use of modern technology. In many ways The Ring and The Blair Witch Project where the first films to really utilise modern technology in a horror sense. Films such as Unfriended, and Friend Request owe these some dues.

From the trailer I had expected this to be teen-ified, to be in the style of crap like The Bye Bye Man, but it was nice to see that only feature in the first third. While there are some great supporting actors it was a shame that the main leads are so dull. Lutz is ok I guess, there is not much to her character, her boyfriend on the other hand I couldn't stand so is a shame he got so much screen time. I also didn't like how the passing of time was displayed. I may be wrong but I could swear there used to be title cards for each of the seven days, here I lost all sense of just how long Julia was meant to have left before the curse strikes her which reduced some of the tension. At least on the music and special effects side of things I had no complaints, I loved the tape footage, Samara looked awesome, and the music was suitable and morose. Plot wise it is a bit too similar but this is vaguely referenced when a character tells Julia that she isn't the first person to go on a quest to try and end the curse of Samara. 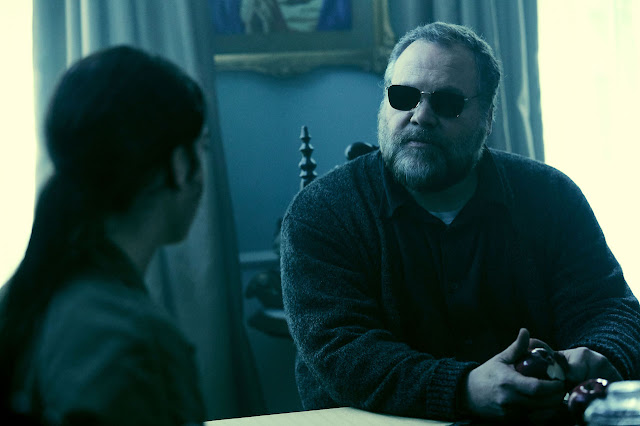 I really don't know why Rings has been getting so many bad reviews, I felt it was a lot better than a lot of mainstream horrors I had seen last year (The Conjuring 2 and Ouija: Origin of Evil for example). I do love the whole Ring mythos so maybe I am biased, but this is a film I would say is a fun watch even if it is not essential viewing.