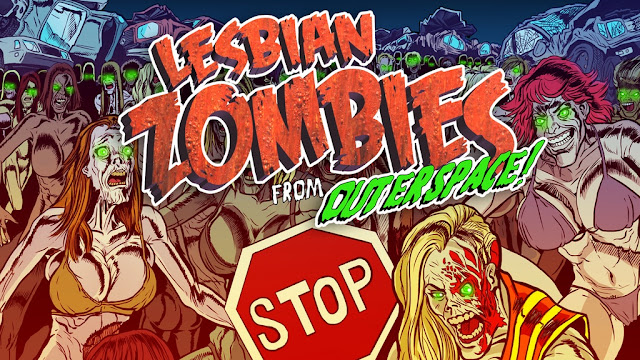 Just last month I got the opportunity to read volume 1 of 'Lesbian Zombies from Outer Space!'. I was dubious going into it as to any level of quality over needless titillation and female exploitation, however the warmth that the main characters shared, coupled with over the top expressive art, and sunny bright colours meant that I came away having had a fun time reading it. Now volume 2 has came out, this is comprised of the final three issues of the seven comic arc. 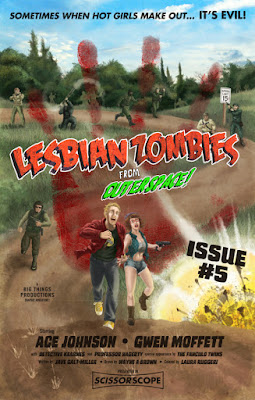 Somehow this time around things manage to get even more sordid and depraved in terms of the battle between the living and the undead. We again see the bad sides of both sexes, starting off with the anti-lesbian militia whose goals have become fogged, with Ace constantly having to try and make them remember that it is zombies who happen to be lesbians that are the threat, and not lesbians in general. Included in this part is a tale which helps in giving an understanding to these misguided heroes. This leads into the final two issues, the first of which provides Ace with the realisation of what it is he needs to do, this includes quite a long training montage set out to an awkward song. After this we are onto the finale itself which is much less action packed than I expected, but did remind me slightly of the end part of Conan the Barbarian.

There is not as much actual zombie slaying this time around, what there is is suitably bloody and gory, usually it is also brief in the way it is shown with less panels used to display dispatched dead. This helps to speed things along, though at times made scenes a little rushed. The zombies have transformed ever more with them all now being near unrecognisable from human females save for their voluptuous body shapes, it was nice to see the gradual evolution. The art used here is as bright and full of expression as ever, while sometimes proportions are off on characters this exaggeration adds to the charm that is still shown here despite a lack of the balance that Gwen brought in volume 1 as she doesn't feature as much. The actual story much like volume 1 is really quite funny in places which was nice to see. 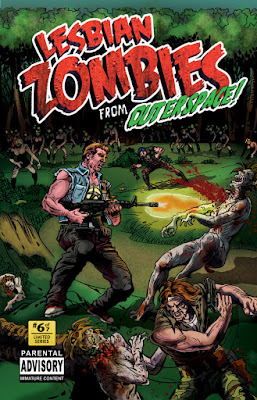 If you want to get offended there is plenty of ammo here to be so, such as several scenes of sexual assault, sex jokes, political incorrectness and more, but the character of Ace is a likeable lead so I was happy just to let it all wash over me.

Obviously if you haven't read the first volume then this second volume is a pointless read, so go check that out before hand. If you have read that part then you do need to consume this also to find out how it all turns out. It leads up to an ambiguous finish that satisfied me and felt like a decent enough end to what has been a really quite unique feeling graphic novel within the confines of the zombie genre.

No problem, thanks for the opportunity to read it, all the best in the future :)