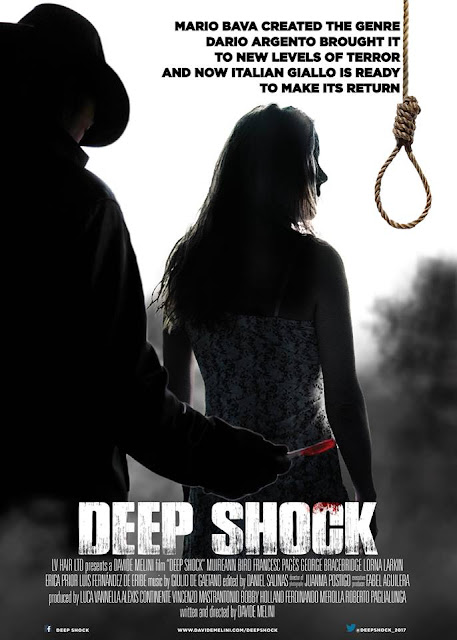 I first mentioned Davide Melini's upcoming short giallo inspired film Deep Shock back in 2013 where it was still in pre-production. Some years later and this is now in post-production with a release due for summer time. As the title itself is a homage to two well known examples of Italian giallo; Deep Red (by Dario Argento) and Shock (by Mario Bava) it is very clear what type of short this will aspire to be.

The synopsis is; Sarah is unable to come to terms with the deaths of her grandfather and older sister. This grief coupled with lack of sleep leads her to embark on a strange journey of apparitions and murders, seemingly conjured from her mind.

So it is written and directed by Melini, and is produced from some notable names that include among them Luca Vincenzo (Avengers, Thor), Alexis Continente (Thor), Vincenzo Mastrantonio (Titanic), Bobby Holland (Game of Thrones, The Dark Knight Rises), Ferdinando Merolla (Hannibal Rising), and Roberto Paglialunga. Giallo is a unique genre, something I have read much about but only seen a handful of films. Check out the teaser trailer below that was effective in making this seem like something to care about...

Posted by Daniel Simmonds at 03:03