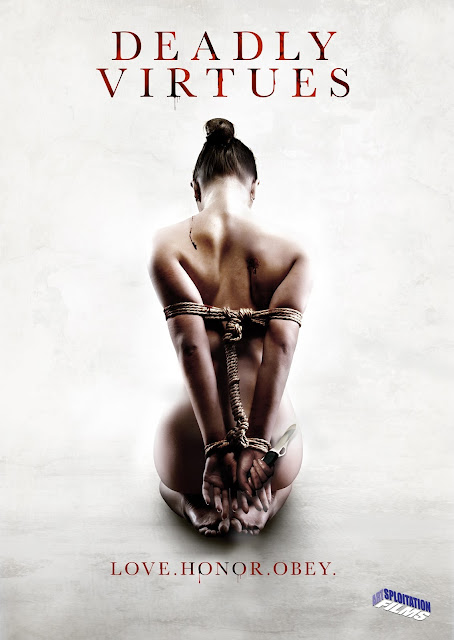 I wasn't particularly looking forward to watching Deadly Virtues: Love.Honor.Obey, the cover featuring a naked woman in bondage ropes brought to mind Fifty Shades of Grey, while I have never seen that, it is with good reason I haven't. Despite that I am going to use a blanket term and say this is probably that film but done in a horror style (a most lazy comparison). Two random interesting facts; first this movie was filmed in Watford, UK, secondly the director Ate de Jong also directed the classic 90's comedy Drop Dead Fred.

A stranger (Edward Akrout) breaks into the home of married couple Tom (Matt Barber) and Alison (Megan Maczko) one evening. He ties up Tom and dumps him in a bath tub, and then tells Alison that for the weekend they are going to act as husband and wife, and that if she is believable enough doing this he shall leave her and her husband alone. Over the course of a few days Alison slowly starts to realise how broken her real marriage is, and that maybe this home invasion is the wake up call she needed... 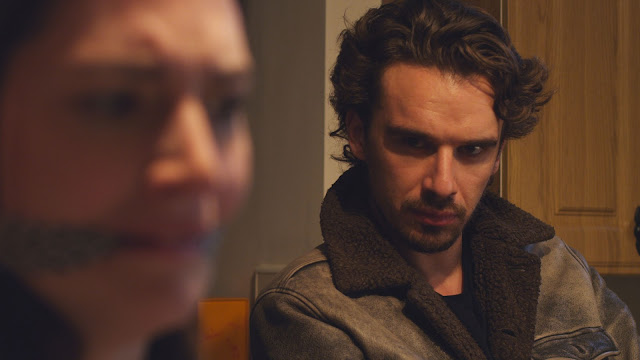 I didn't like this film, just had to get that out the way first. A lot of the themes are about sex, something I always find awkward to watch, I also didn't like the humiliation parts of the movie that frequently pop up. The film starts with the stranger getting into the house, as such there was no chance to see what sort of people Alison and Tom where. This works in the films favour as over the next 90 minutes we slowly find out via conversations and evidence around the house that maybe their relationship was nowhere near as good as at first seems. It was interesting to set it out this way but in no way makes up for the awful moments such as when the stranger teases Alison by talking about her sex toys and clothes, when he urinates on Tom, or when he forces Alison to swallow a tooth he had ripped out of her husbands mouth. Violence against woman is always a topic nowadays, though here aside from the humiliation she is left unharmed by the smooth talking psycho (aside from being molested which actually is also not a great thing). Poor Tom is the one who gets all the physical abuse, though as secrets are uncovered and his true character is revealed it is almost just desserts for him.

I found a lot of Deadly Virtues to be quite repetitive, and at times unrealistic. There are many different moments where Alison contemplates using a weapon to fight back against the stranger, but she always falters at the last moment. I don't know if it is supposed to make the viewer think she is having second thoughts, and he certainly has some good points to say, but the way he delivers this knowledge means I could never see him as anything but the antagonist. I hated his smooth talking ways and the eventual warmness the two get. Regardless of what home truths he is bringing, the very fact he has broken into a home, kidnapped the inhabitants, and tortured them means his advice should be meaningless as he is not a good soul. Alison also irritated, she takes the majority of the film to find a backbone, I get that this is on purpose as she was a victim in an abusive relationship, but even after her ordeal it still takes a while for her to make a change. The film does get better towards the end with some small twists I didn't expect, so there is that. 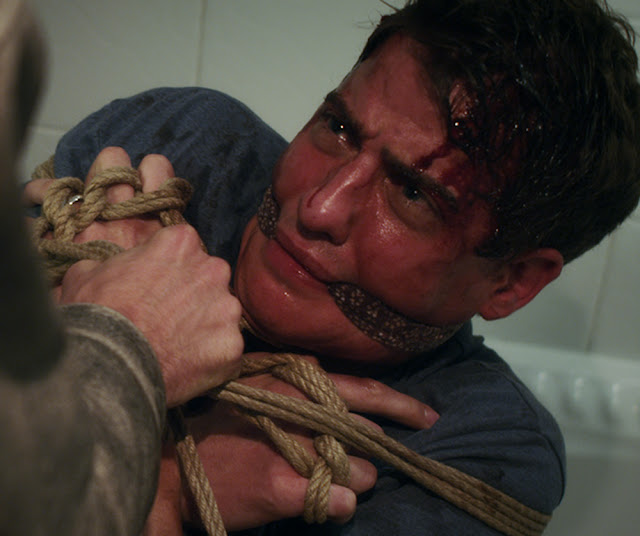 The directing is pretty good throughout, I loved the slow close up body shots used at some points, while the set design is always offering silent clues. The special effects also are not bad, the blood looks suitably bloody, while fight scenes seem realistic enough. The acting is also fine, though I found Tom to be a bit cartoon like in his actions, especially towards the end. The stranger has a soothing, quiet way of speaking which fitted his character, yet I sometimes struggled to make out exactly what is was he was saying due to the mellow way he spoke.

If your after some uncomfortable titillation, scenes of humiliation and an essay on what a husband and wife should actually be like then you may find something to like with this movie, at the very least it is well made and cohesive even if seeming unrealistic at times. Deadly Virtues: Love.Honor.Obey was released exclusively on VOD on 7th February thanks to Artsploitation Films. Check out the trailer below and see if it takes your fancy...