Call of Duty: Infinite Warfare: Rave in the Redwoods (2017) - Impressions of the new Zombies map 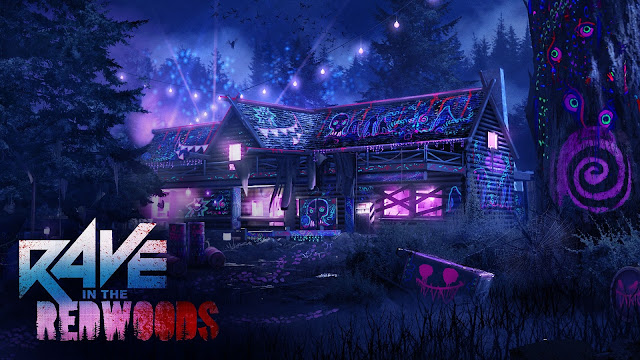 Rave in the Redwoods is the second Zombies map to be released for Call of Duty: Infinite Warfare and was included in the Sabotage DLC pack. With regards to the multiplayer DLC I just have to first say the map Noir is great, it takes place in a city at night with the rain pouring down. Anyway onto the Zombies info. As always this is merely my first impression, I in no way have seen everything this map has to offer.

The intro sequence is set up once more as a cartoon, the style didn't impress me the first time around so left me cold once again. After the four characters (Andre, Sally, AJ, and Poindexter) defeat the undead hordes in Zombies in Spaceland a portal opens up that teleports the group somewhere new. They are dismayed to find that once again they are slap bang in the middle of a zombie outbreak, this time they are in the 90's, the location; a remote rave in the redwoods.

In terms of map design I much prefer Rave in the Redwoods, the first map was un-apologetically rigid in it's design, but here out in the woods there is more excuse to have long meandering paths. There are an assortment of locations you can travel to. Starting off in a huge cabin you can go to an assault course, some mines, some Scout cabins, a lake, and the best place; a stage where mostly licenced early 90's rave music is playing constantly. The stage area is the one I have been to most purely for the awesome music playing. Unlike Zombies in Spaceland where music played all over the map here it is restricted just to this area. It makes sense due to narrative, but it would have been awesome to have been able to get the songs playing all over the map. After collecting three motorboat parts you are able to travel to a small island where bizarrely the home of director Kevin Smith (Clerks) can be located, as can the portal to the pack-a-punch room. 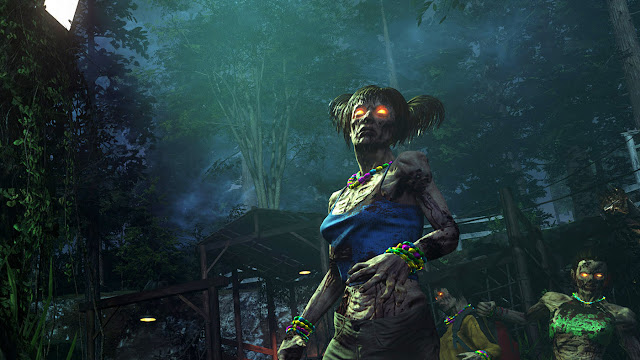 So far there seems to be a few main things to achieve. The switch to turn on the power is located in the basement of the main cabin, this opens up the upstairs area where juggernog can be found. Also upstairs are zip-lines which let you quickly get to various areas of the map. Hidden around the level are animal statues, so far I have worked out if you take them to the stage area they can be put in pedestals which power them up. These can then be left by big wooden statues dotted around the map. Every now and again you can collect a pouch, throw this into one of the many fires and something amazing happens...the level basically turns day-glo. The zombies all have day-glo paint adorned on their bodies, while the level comes to neon life with huge mushrooms appearing, fairies, and secret shortcuts popping up to buy. Also this brings with it the appearance of a huge Jason Vorhees style chainsaw wielding brute who appears to be invincible.

The zombie design is mostly that of ravers, they seem to just appear everywhere on this level, not just coming up out of the floor, or out of previously barricaded windows. They swing down on zip-wires, leap off buildings, vault over fences. Now instead of exploding clowns every five or so rounds you get huge bigfoot creatures that are pretty strong should they hit you. There are new enviromental traps to use to help you in your battles, as well as some cool looking melee weapons.The starting area gives you a choice of a machete, golf club, spiked baseball bat, and double sided axe that are all quite strong and will see you through a fair few early rounds. Elsewhere you have a wood chipper that sucks in the undead, while activating the stage makes nearby zombies all come and start dancing in front of the speakers located there, until the speakers blast them away. There are new gobblegum style perks, but the most fun was the new balloon power up you can get by putting gems in totem statues, see the included video to see what that does.

I love Rave in the Redwoods, it is a much more interesting map than the first one, while the location for the most part is a lot more dark and oppressive at times. The Rave mode is stunning to see also. The Afterlife Arcade returns once again and it was sad to see the main games for getting soul points are the same as before. However the arcade machines are all new ones and include Crackpot which I adore! A fantastically designed map, I am excited to see what shows up next for the Zombies mode.

Funny modification. It is interesting to try to play it with my friends, I think it will surprise them. We often play in these games, it is our passion since childhood. Now we know one more entertainment to this game https://cybbet.com/games/cod, it can bring good money.