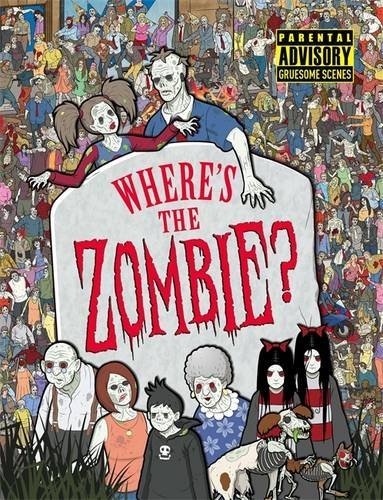 When I was a child I really wanted the Where's Wally? books, of course you know I mean the ones that feature double paged environments full of people with the aim being to find Wally (Waldo in America) and various other items on the page. I had to make do with a knock-off called Hunt for Hector then. Where's the Zombie? is the undead version of the 'find the person' style of books.

There is actually a rough story of sorts, the intro details how there was an accident at Hart Laboratories in New York. Scientist Joel Peters got infected with a virus, he was quarantined but not before inadvertently passing on the strange new disease to his family. The book details a wide view of an unfolding zombie apocalypse that sweeps America, starting off in a city hospital and ending with assaults on the last remaining human strongholds. Each double page (seventeen different scenes) has a date stamp to it, I did find some scenes seemed out of order. For example the fall of the White House happens before panic buying in supermarkets stops which seemed odd. 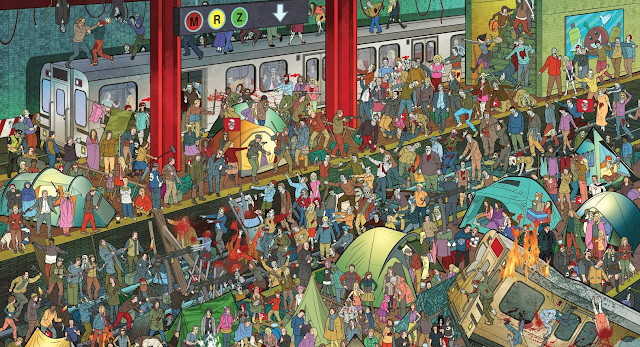 Much like jigsaw puzzles nowadays I found having to search for objects to be an occasional exercise in annoyance. I feel compelled to find everything on the page, but at the same time a part of me knows it is all a fruitless waste of time. At least the subject matter is cool, and it was actually a nice surprise to see the unfolding story not have a happy ending. Normally that would be prefaced with a 'spoiler' warning but this is only a hidden object book after all. In each double page spread you must find the members of the Peters household who are roaming the environment in zombie form. These include Joel, his parents, his wife, their four children, and their two pets. There are also ten first aid kits hidden in each scene, while the back of the book details some extra things to find on each page (such as 'a zombie police officer').

Much like other books of this type there is plenty of detail included with often funny things hidden such as a man who has got his foot stuck inside a zombie after kicking it, but it is also very bloody. There is lots of blood in each scene with many inventive ways to show the undead being re-killed. You get a woman on a motorbike leaving a bloody smear as she runs over zombie heads, a farmer holding an impaled zombie on his pitchfork, lots and lots of gory headshots, and scenes of people having the flesh eaten off their bodies. This is all done in a cartoon style but with realistically proportioned people. The art is both colourful, simple as well as detailed.

This is a fun novelty book that certainly has literal hours of hunting to do. I liked the different locations, it was cool there were so many, but for me the hunting for objects is not something I like to do due to the annoying compulsion I have to find everything.