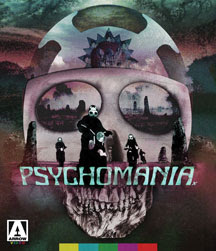 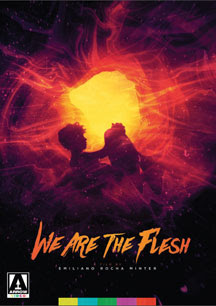 Today I am going to talk about two different films; We Are the Flesh (2016) and Psychomania (1973), both of which are coming out on Blu-Ray and DVD thanks to Arrow Video US. Both these films are also available to get if your in the UK so don't worry if your from here!

We Are the Flesh is a Mexican arthouse film that 'takes you on a nightmarish journey into a post-apocalypse hell. The plot involves a brother and sister who take refuge with a strange hermit in a ruined city. This hermit acts out his most dark depraved fantasies which the siblings find themselves getting caught up in. It has been described as an all-out psychedelic head-trip, the blurb reads: 'visionary, unrelenting, and certainly not for the prudish or faint-hearted'. It has received praise from directors Alfonso Cuaron (Gravity) and Alejandro Gonzalez Inarritu (The Revenant), as well as places such as Total Film and SFX. It comes out on 14th February for $29.95 (Blu-Ray) and $19.95 (DVD) with a host of extras including interviews with the cast and two short additional films; Dentro and Videohome. Arrow Video are releasing the UK version on 13th February (my birthday) for £12.99, at least on Amazon anyway.

Psychomania is another interesting sounding release, this time as it features that most wonderful of movie monsters the zombie. This British movie is about an English biker gang called The Living Dead whose name becomes literal when they discover the key to immortality, it is directed by Don Sharp (Kiss of the Vampire, The Devil-Ship Pirates) and co stars Beryl Reid (Dr. Phibes Rises Again) and George Sanders (Village of the Damned). This one is described as 'a wonderfully offbeat gem, outlandish and eccentric in equal measure'. Psychomania is due for release on 21st February, the extras include interviews with the cast and crew as well as an archive making of feature. This can also be found to buy in the UK if you so wished.
Posted by Daniel Simmonds at 10:36